I just stopped at Lowes for a lightbulb and they had what must be a recent shipment of Cobra plants in their "death tubes". These suckers were bigger than any I've ever seen in person and I grabbed one that has a main pitcher that has to be around a foot tall.

Is there really any way that a company that packages their plants in such an unnatural way would seriously have the ability and resources to mass produce Darlingtonia of such size?

Perhaps they know how to care for them and package them that way in the hopes that people will kill them off and come back to buy more, but as I was driving home and thinking about this, the more questionable it seems.

Obviously they can't poach the nepenthes and D adele from the wild (probably not), but these could very easily be done.

Has anyone else seen them of this size? I'd seen S flava there before in this size, but this is the first I'd seen the Cobras. 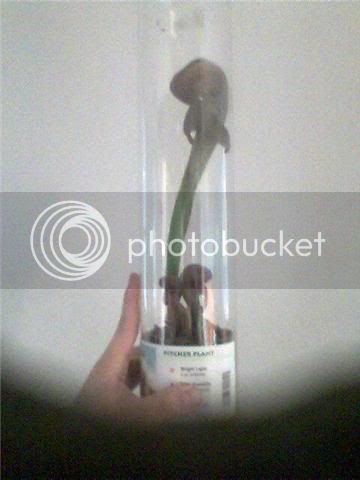 i think there are just variable sizes. ive seen large cobras and sarrs also. i dont think they were harvested because i picked up one like a day after lowes got them and took the dome off and it immediately started wilting. that signifies the plants would have had to have very high humidity for quite some time.

I agree with glider14; a few weeks ago I found multiple S. minor plants with pitchers around a foot tall for the price of a regular sized plant. However, the pitchers were all green, signaling that it didn't get enough light.

well. no not really a light issue. the plants had plenty of color to them. i got one before i got my camera so i dont have any pics of it. the plants just had some age on them and they were naturally bigger than the smaller ones. it wasn't a light issue. and S. minor isn't sold in death cubes, to my knowledge. it was probably a light starved 'Scarlet Belle'.

I was referring to the fact that large cps at gardening stores are not at all unusual.

I see S. minor here in Ca in "death tubes", once in a while.

my first cobra had a head that was at least 2.5 ft long--a friggin tall sucker, i remember holding it's head bringing it home, not wanting it to snap--relatively narrow base with a bulbous head. however, it never had any leaves remotely close to that size during the remainder of the time I had it.

Your concern about poaching is great, but don't forget that Darlingtonia californica doesn't transplant well. Wild plants would have died on the shelf in most cases, because the shock of being dug up and transported from CA or OR all the way to Kentucky would have finished them already.

I have also heard that, unfortunately enough, they found a clone that grows like a weed in tissue culture... I have yet to see any Darlingtonia at any local hardware store.

Also, to get tubes around the plants, I think that they pot them in those small pots, wrap the plastic sheet around the pot and glue the two overlapping areas together, creating a tube for holding the plant/s. Or they gently drop them in if there appears to be no seam. I have seen the former and latter on tubes filled with sickly little Dionaea.
L

That's NUTS! I've never seen one that huge at a hardware store. Enjoy it!

Enjoy the great price for so big! I wish I came across one of those...

Well, you know exactly what I'd do for one.

Not to highjack the post or anything, but I got this HUGE cobra plant at Lowes a couple of days ago. I was just picking up supplies for my first bog garden, and I remembered that they have a spot for CPs. I went over there, and POOF, I saw it. When I was getting this thing it felt like a birthday party. I added it to my bog right away. And everyday I go outside watch as the bugs disapear. Now my plant isn't as tall as ilbasso's, but its got a ton more pitcher.......things. I'll post pics as soon as I can.
You must log in or register to reply here.