My new terrarium and some plants! ;)

This is my new terrarium, I have been working on it for about a month now. Now the plants are settle, i just thought about posting pics of it!
In the terrarium there are:
1 heli minor
1 ceph
1 drosera capensis
2-3 drosera capensis alba
1-2 drosera albino
5-8 several drosera burmanniees.
6 nepenthes: rajah, lowii, sanguinea orange, ventricosa, ramispina
1 VFT
1 clump of U. Sandersonii
1 clump of U. Longifolia
several strands of spanish moss( not really a moss, but a bromeliad)
1tillandsia ionantha: fuego, rosita, conehead.

and still need to add a pinguicula suitable for a terrarium!

For those who wonder how i'm keeping the help and ceph together without much problem. the trick to this is that for both plants, the roots are "hanging" in a hole below the moss, and the surrounding has stones. so both plants receive enough humidity specially for the Heli, but the water ( i use a spray bottle) just drips directly into the big cracks, the roots only touch the water drops for a very little amount of time i'm guessing( since i can't look below the soil), and then fall directly down to the bottom, the plant receives good air circulation although i don't use a fan, and sounds like all plants are doing fine. I have created a micro ecosystem inside a large microesystem! and all with the same requirements, simply add the stones for the ones that need it and you're good to go!

The media below is silica sand, then very little peat moss, and then Long fiber spaghnum moss, then the live moss. temps in the day: 70F, and 60F in the night, or colder at times.
Apart from receiving light from the grow panel 45, i leave the curtains open, so they natural light as well,and about 20 or so minutes of filter sunlight from the really late afternoon. 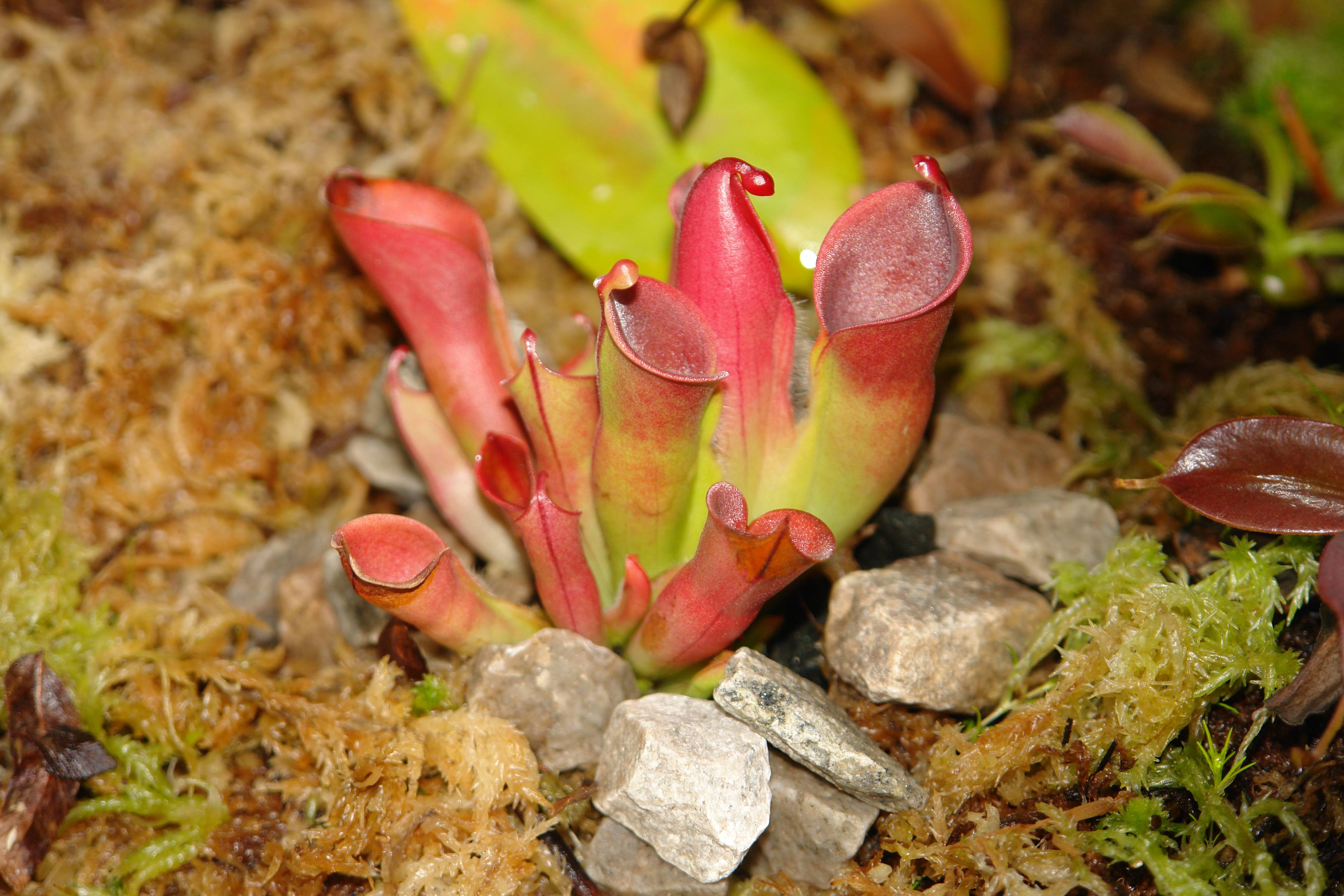 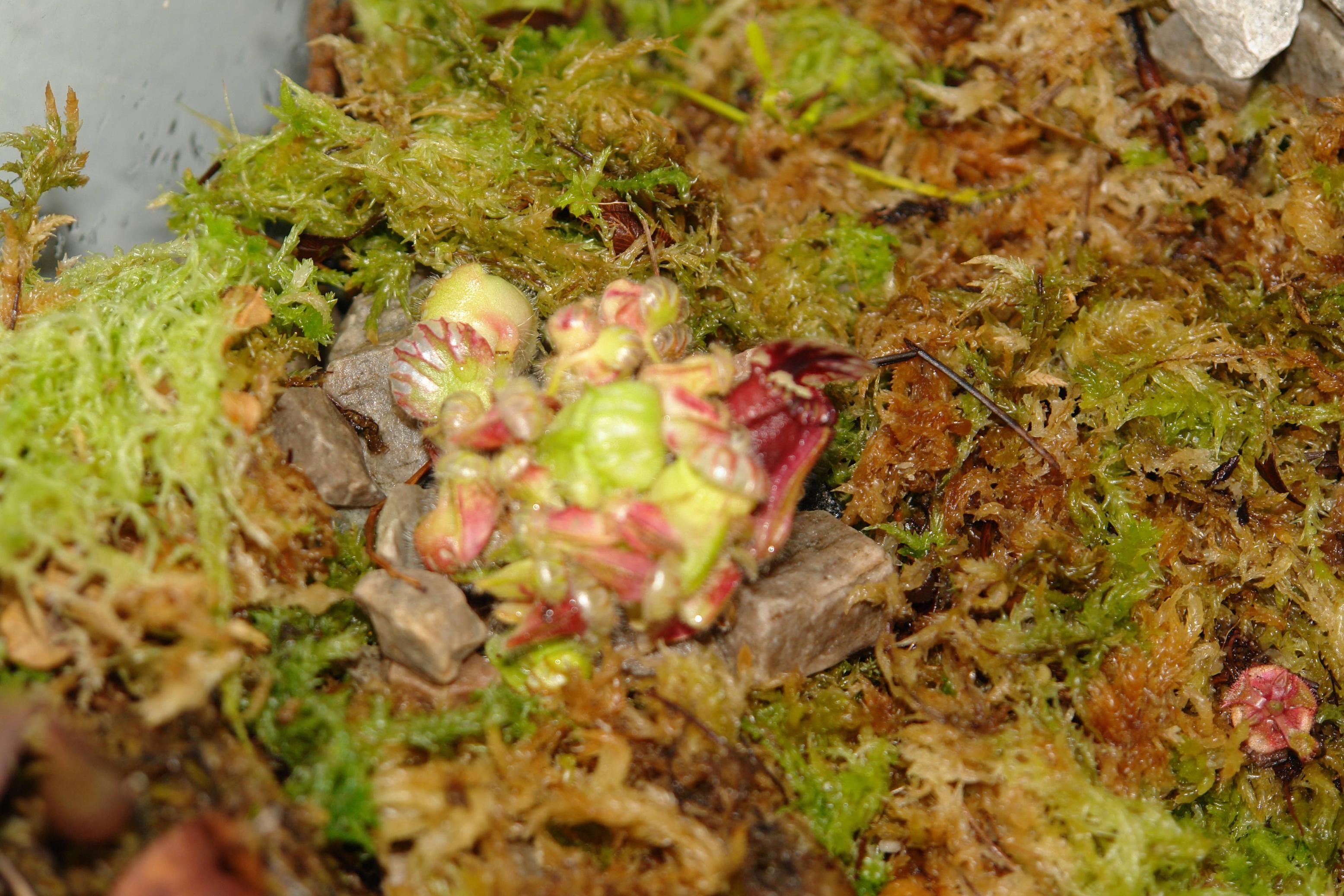 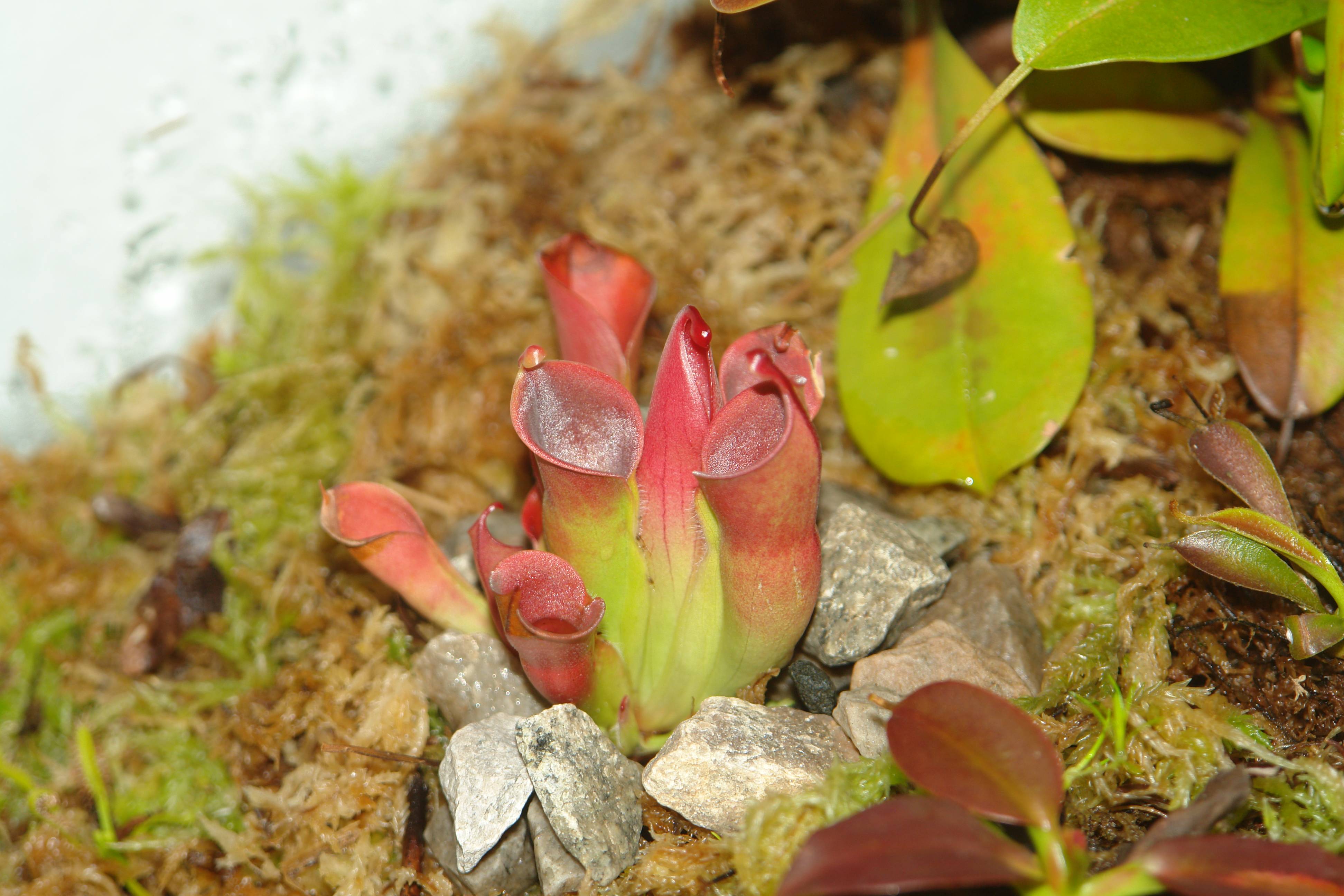 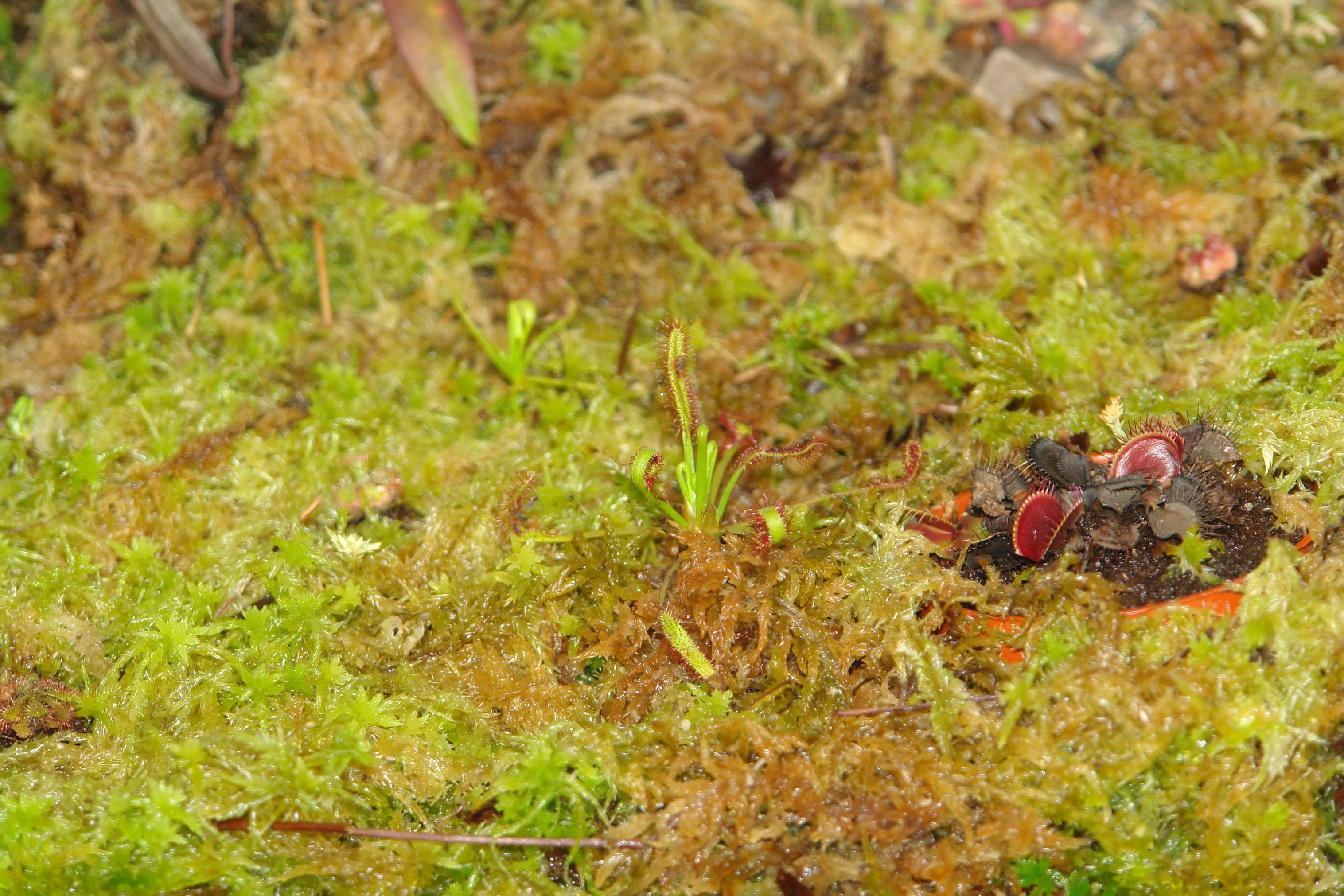 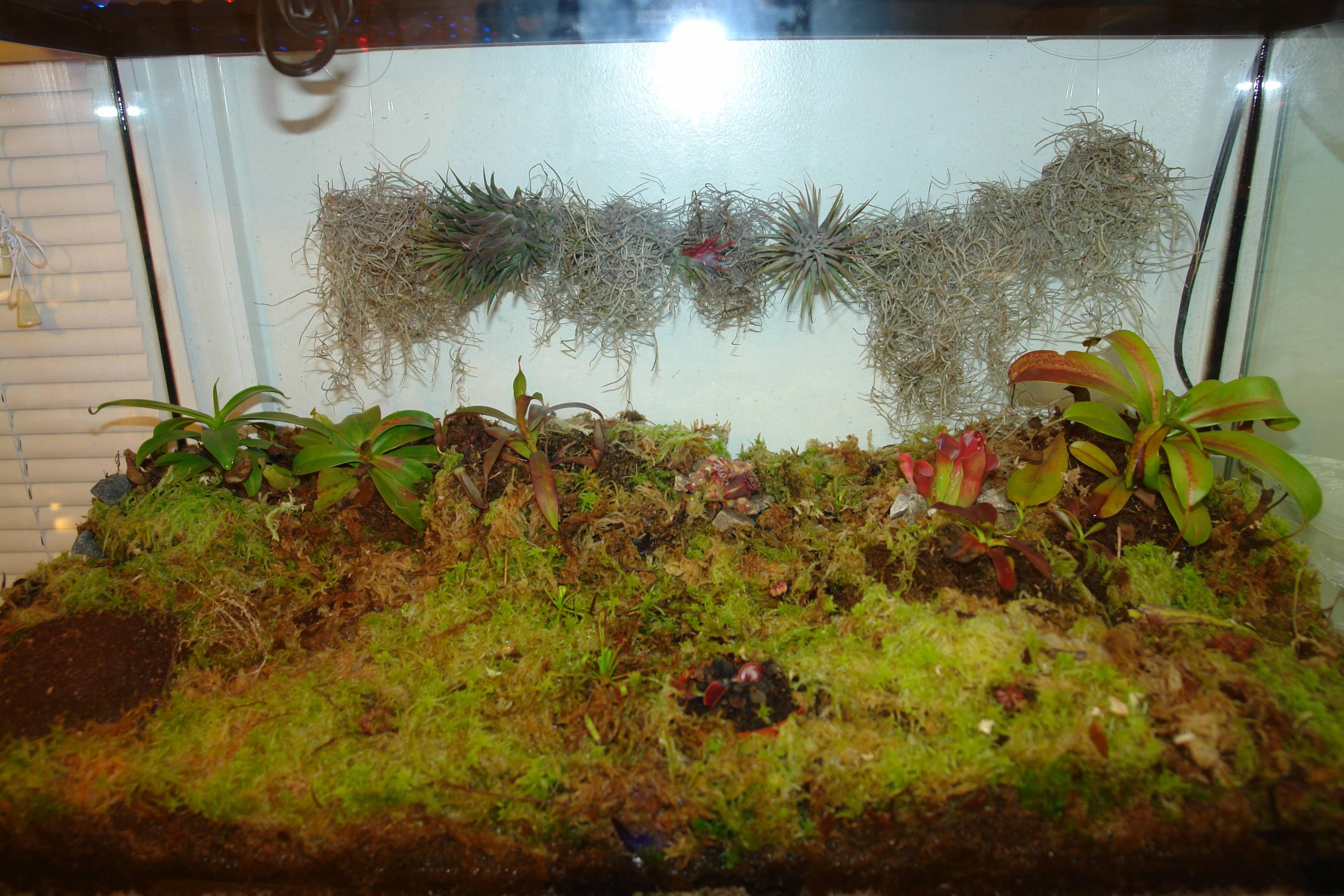 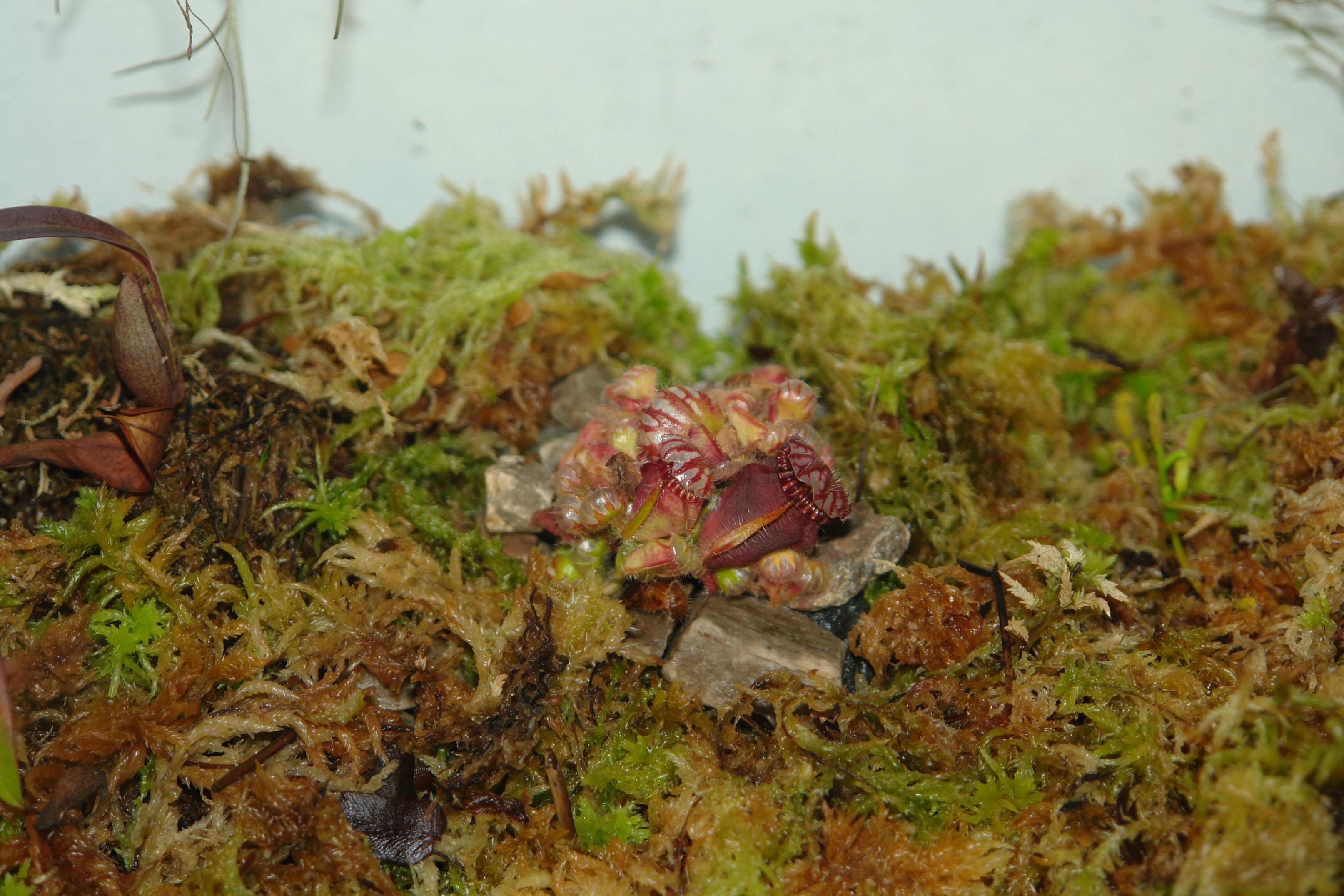 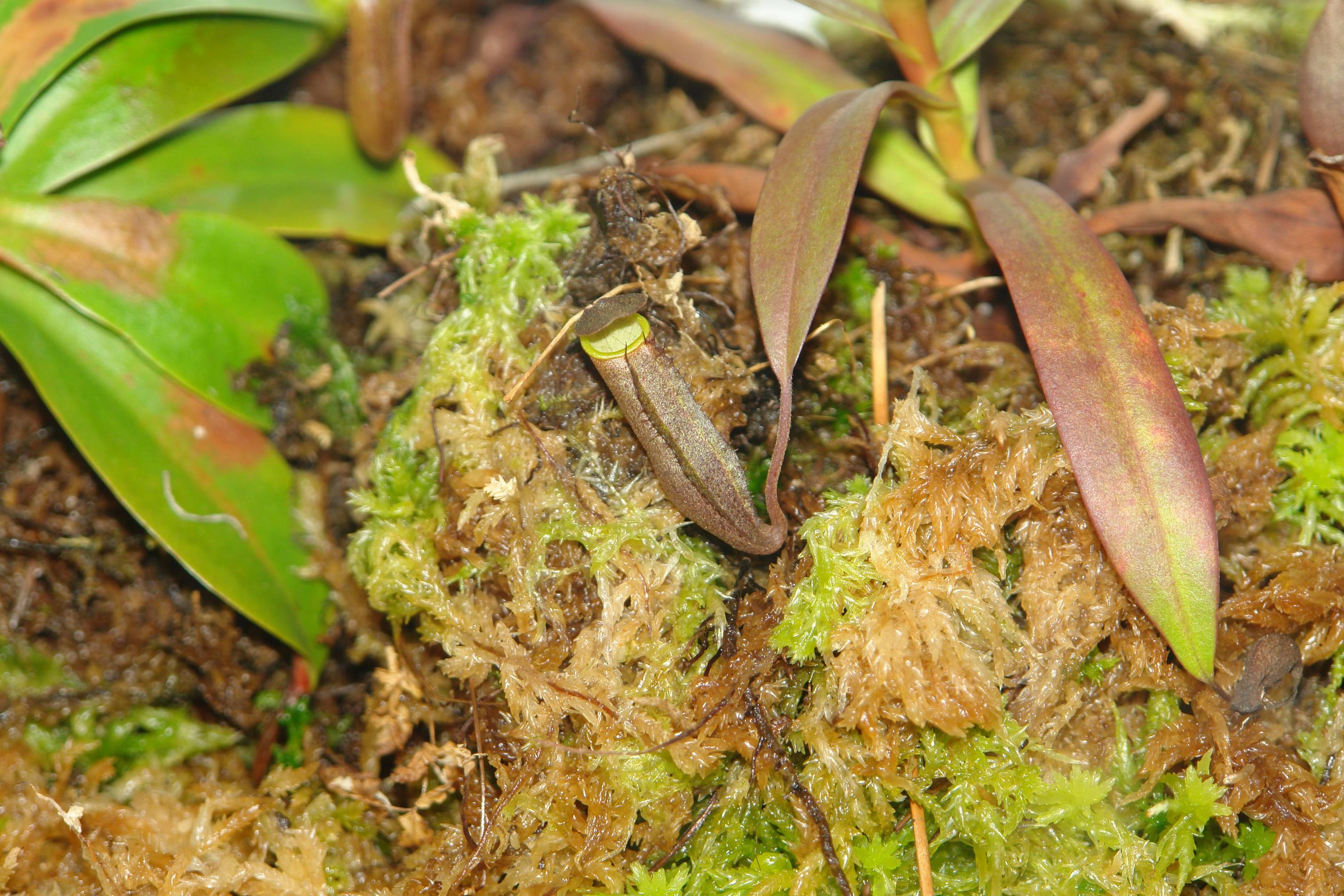 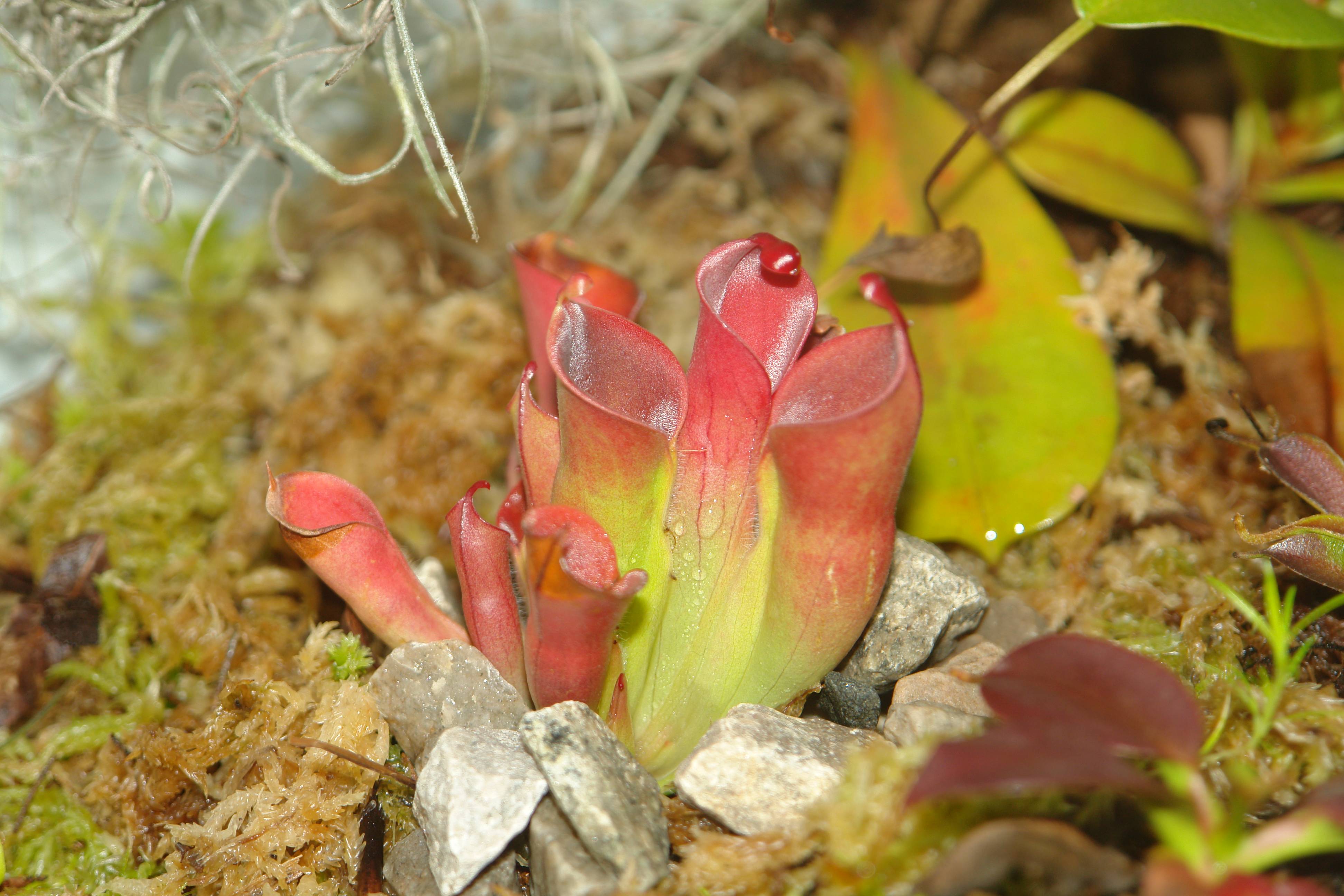 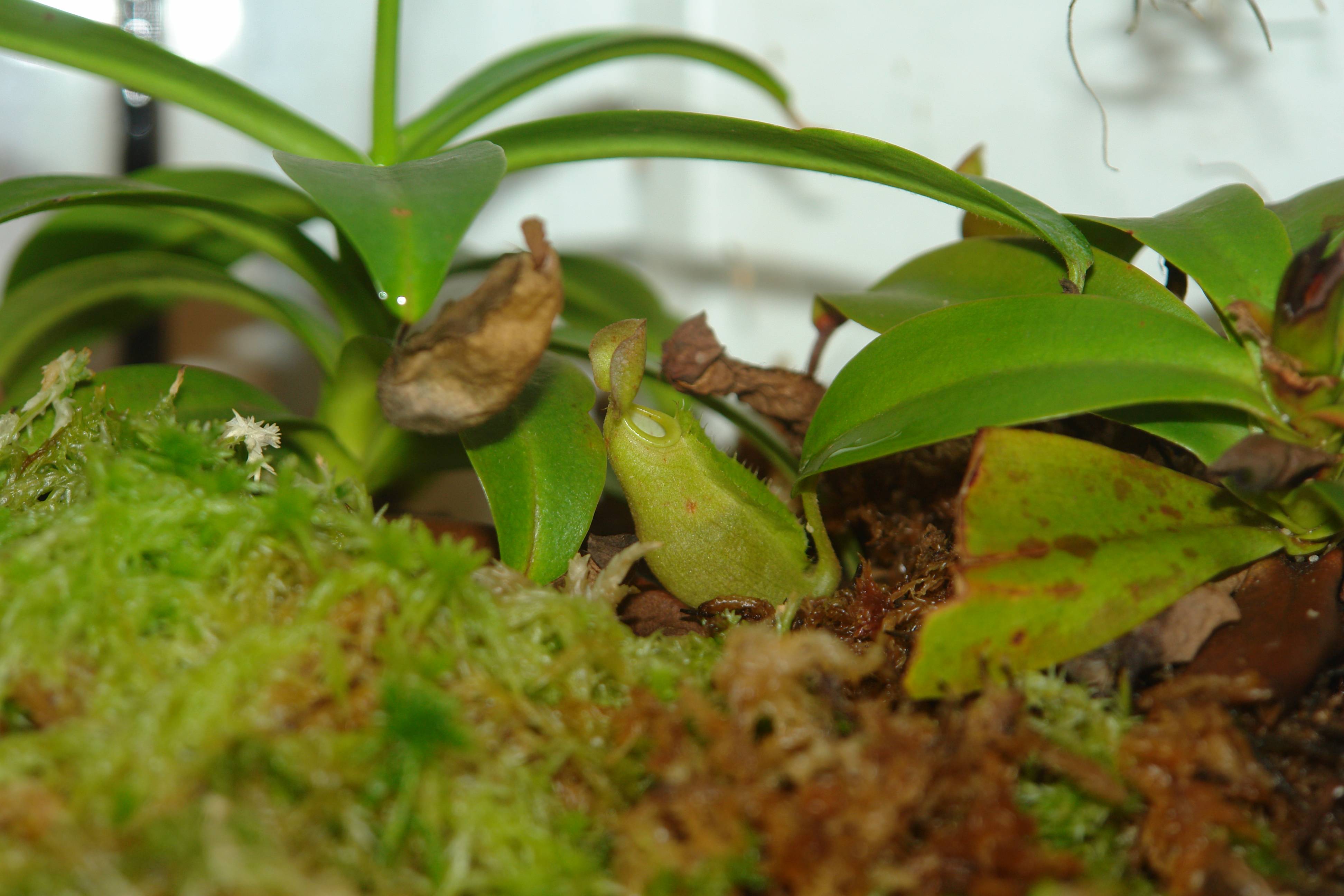 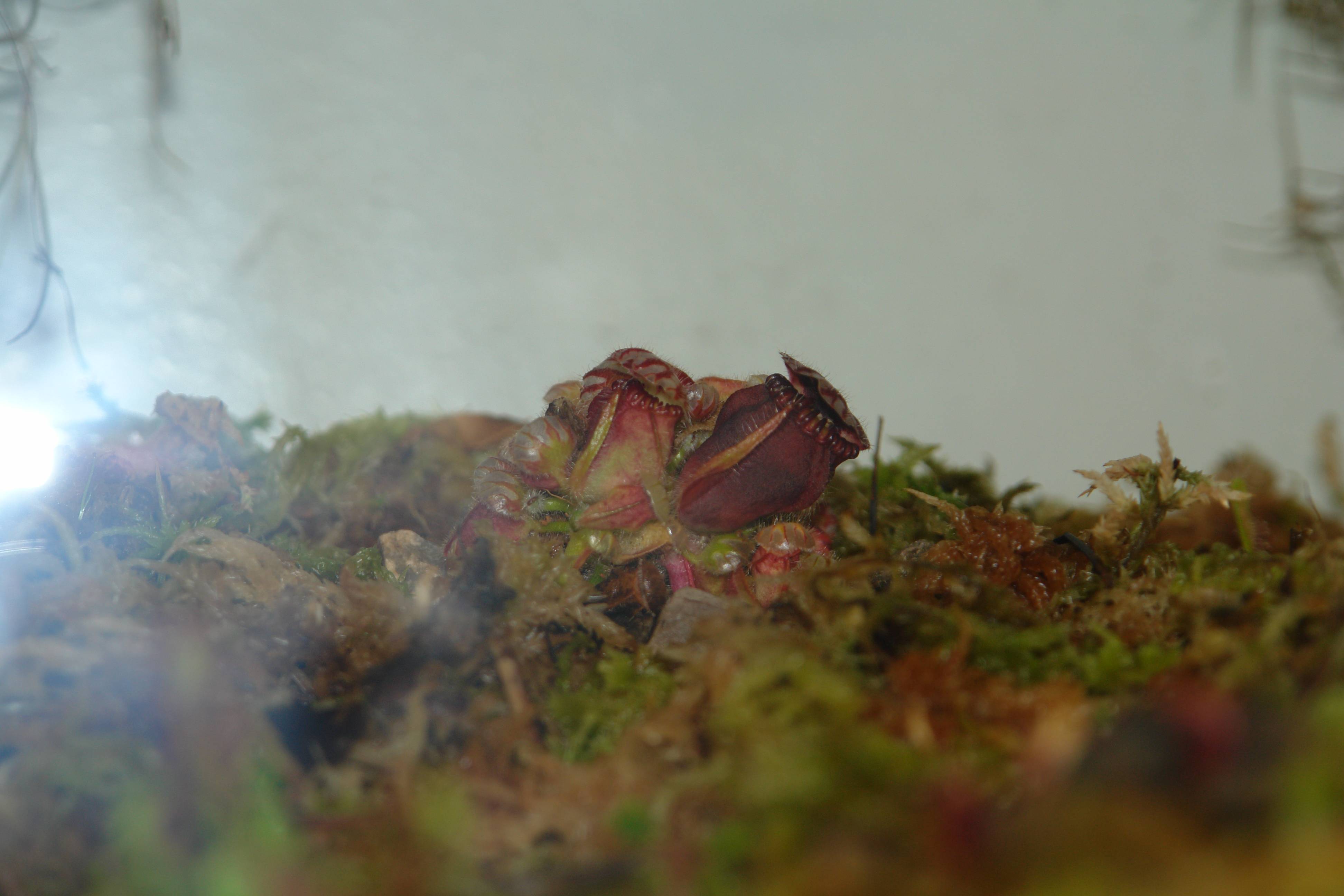 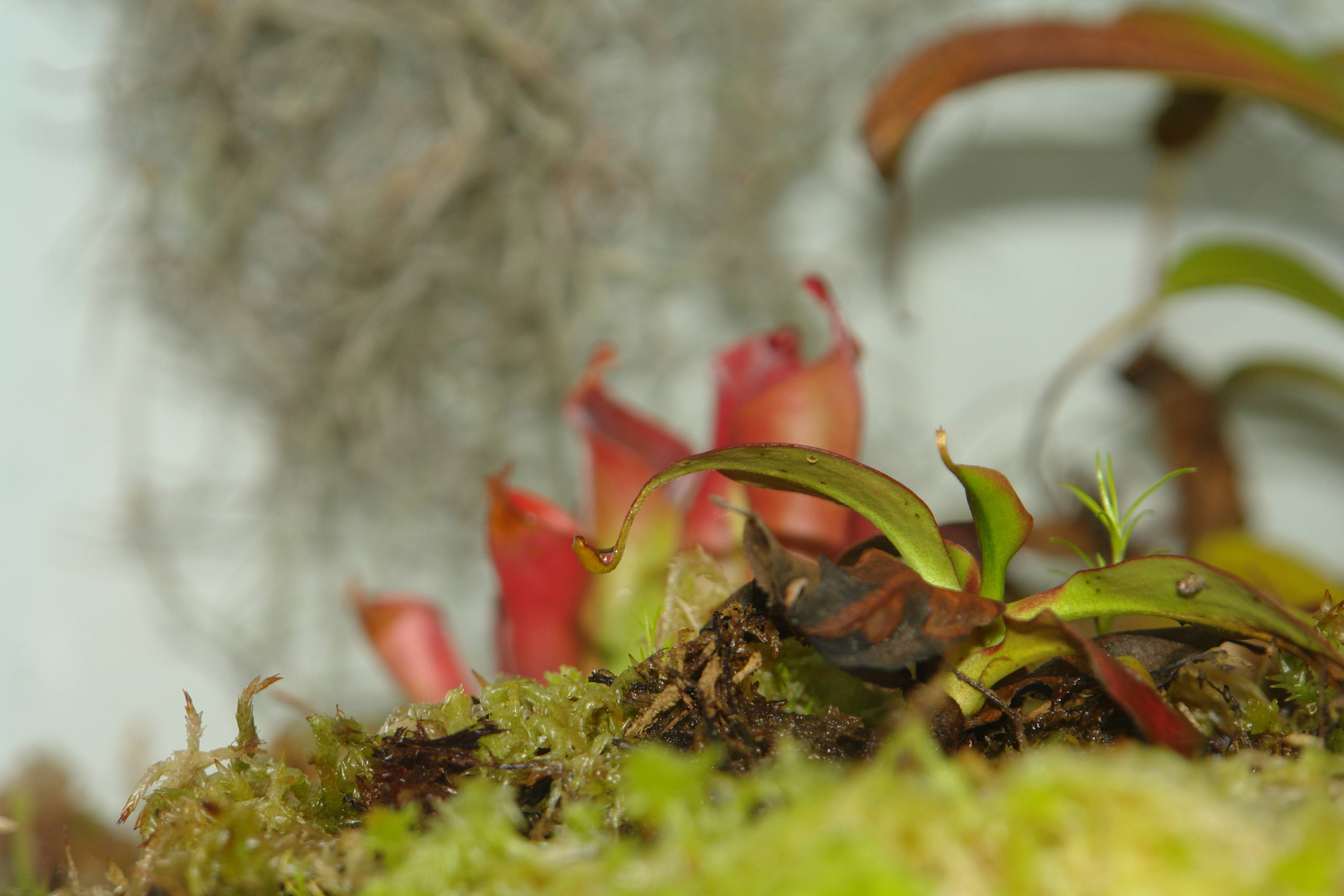 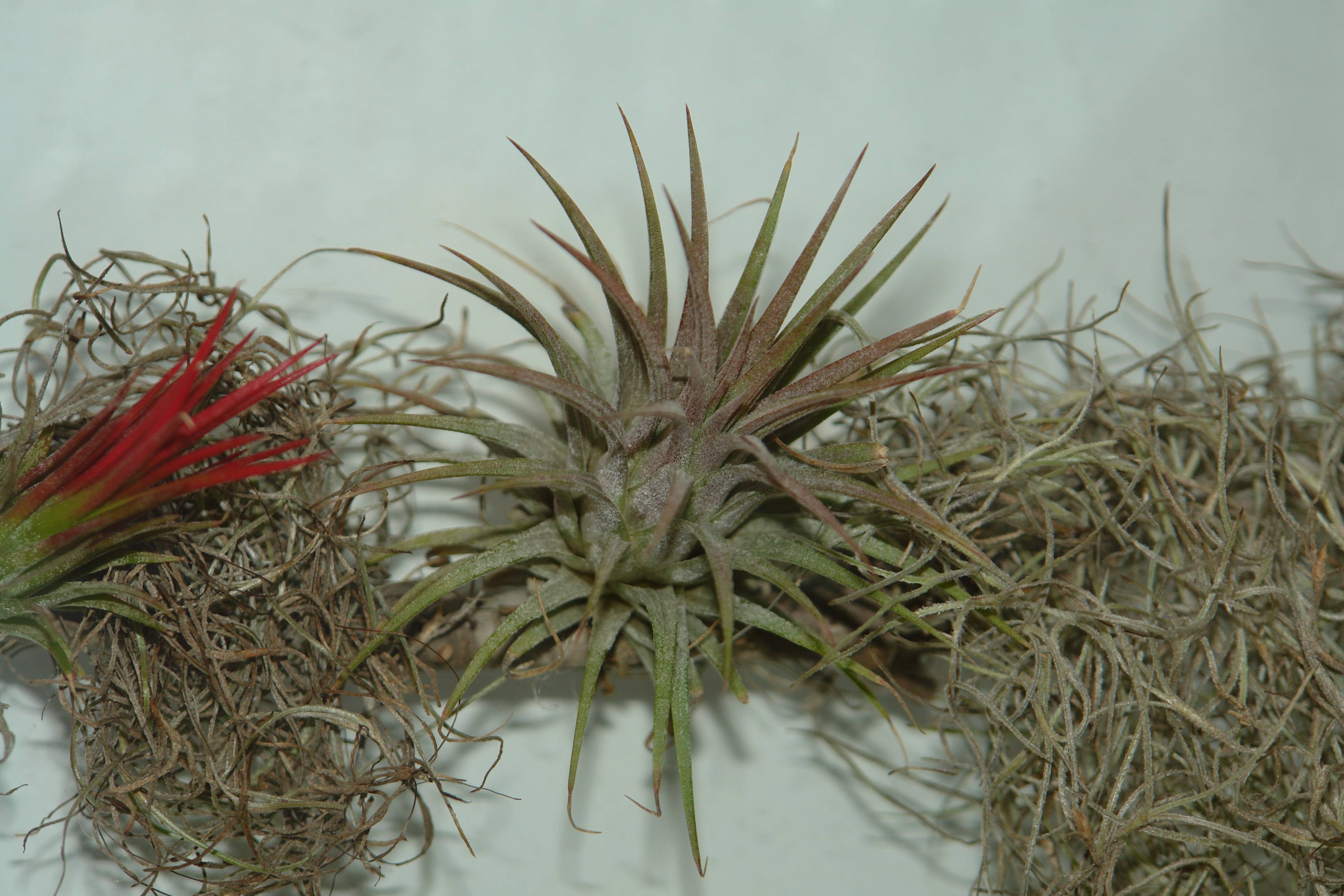 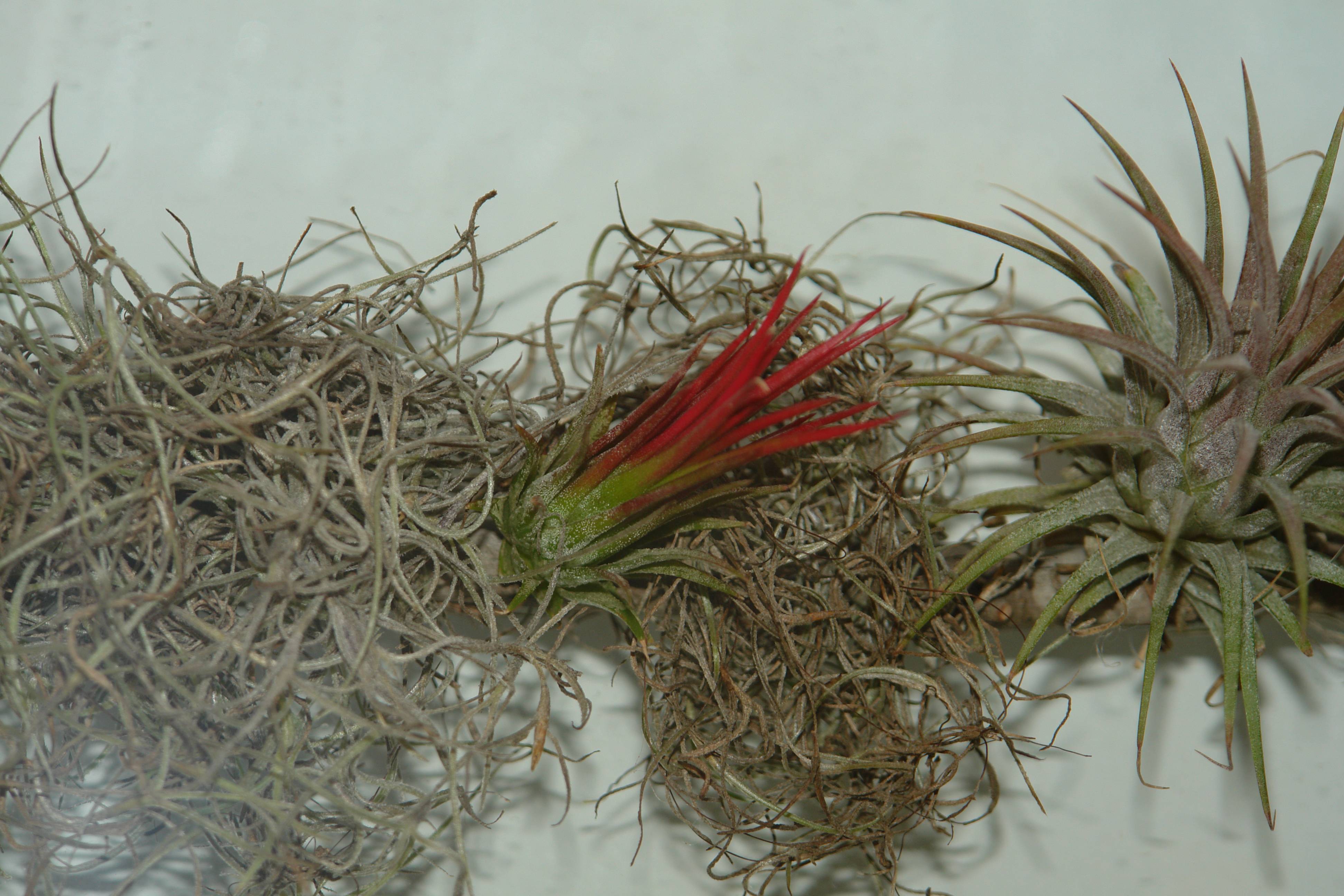 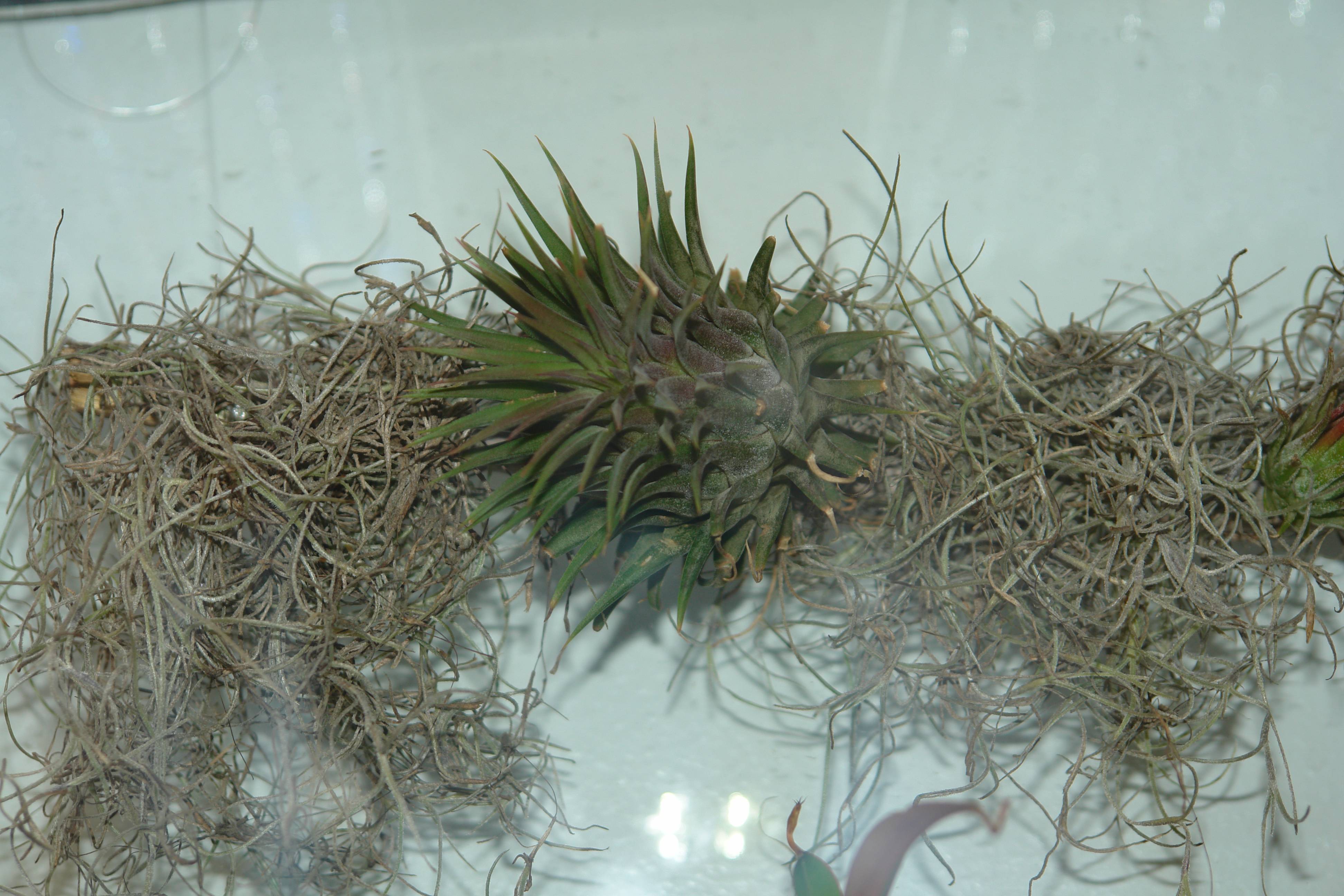 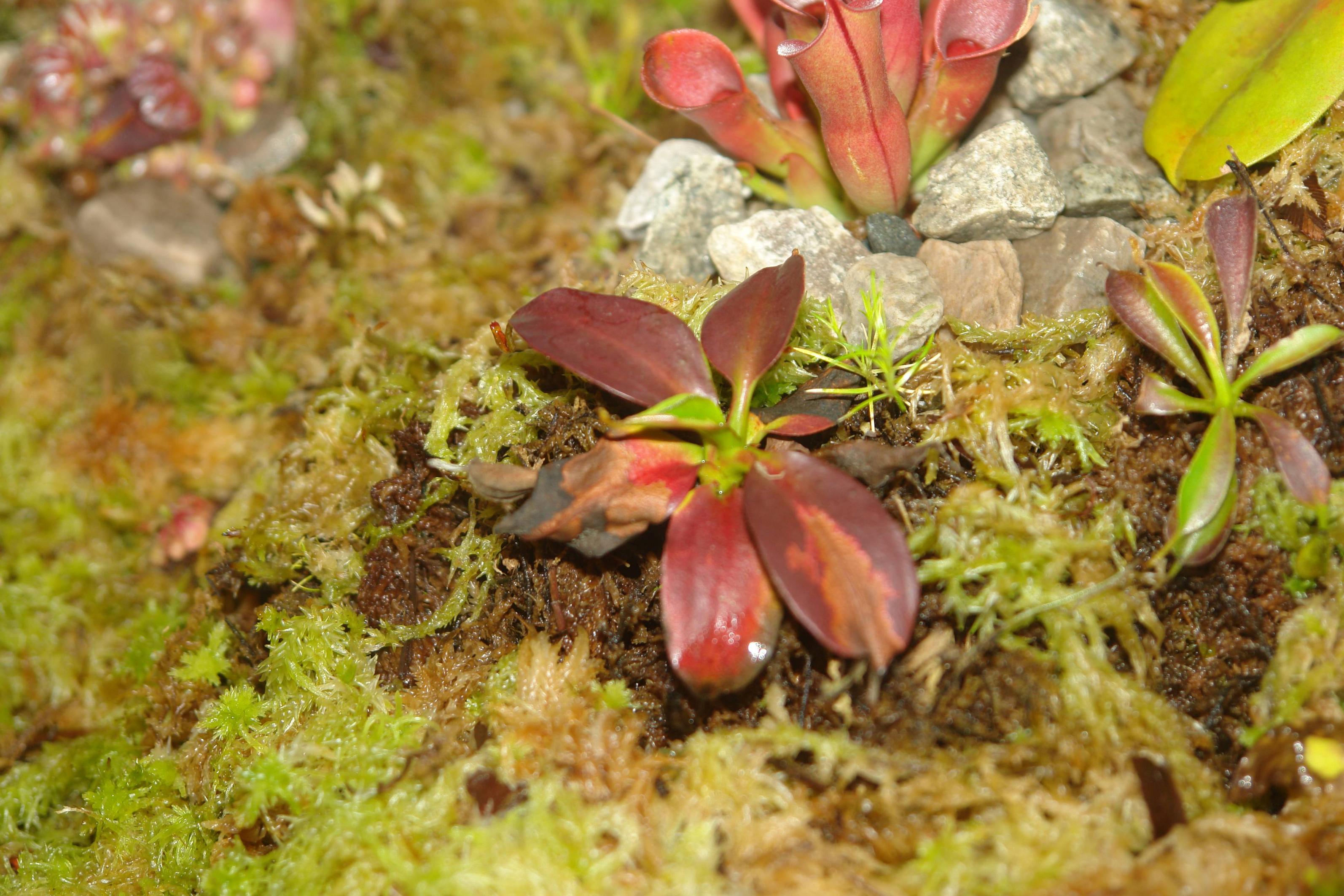 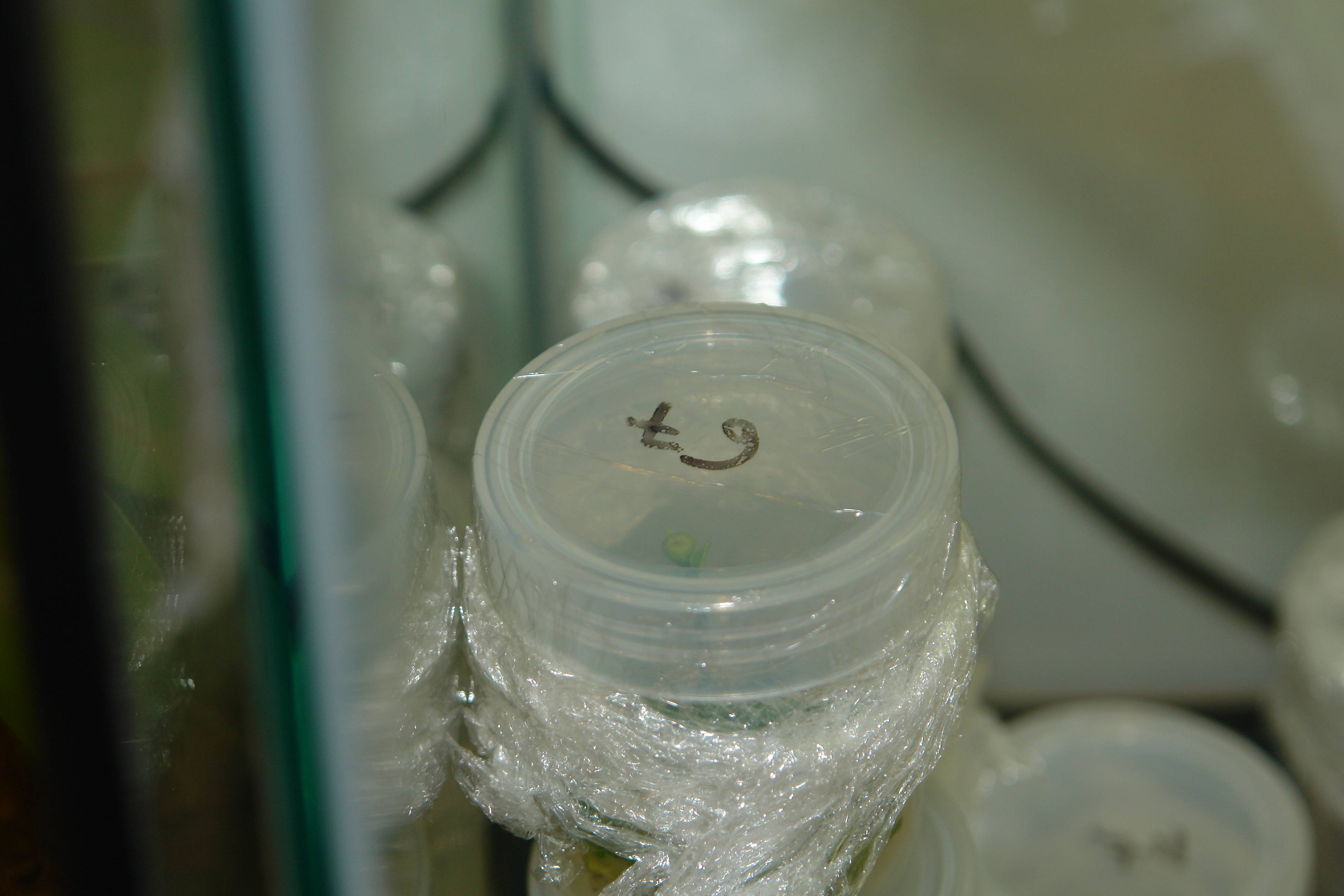 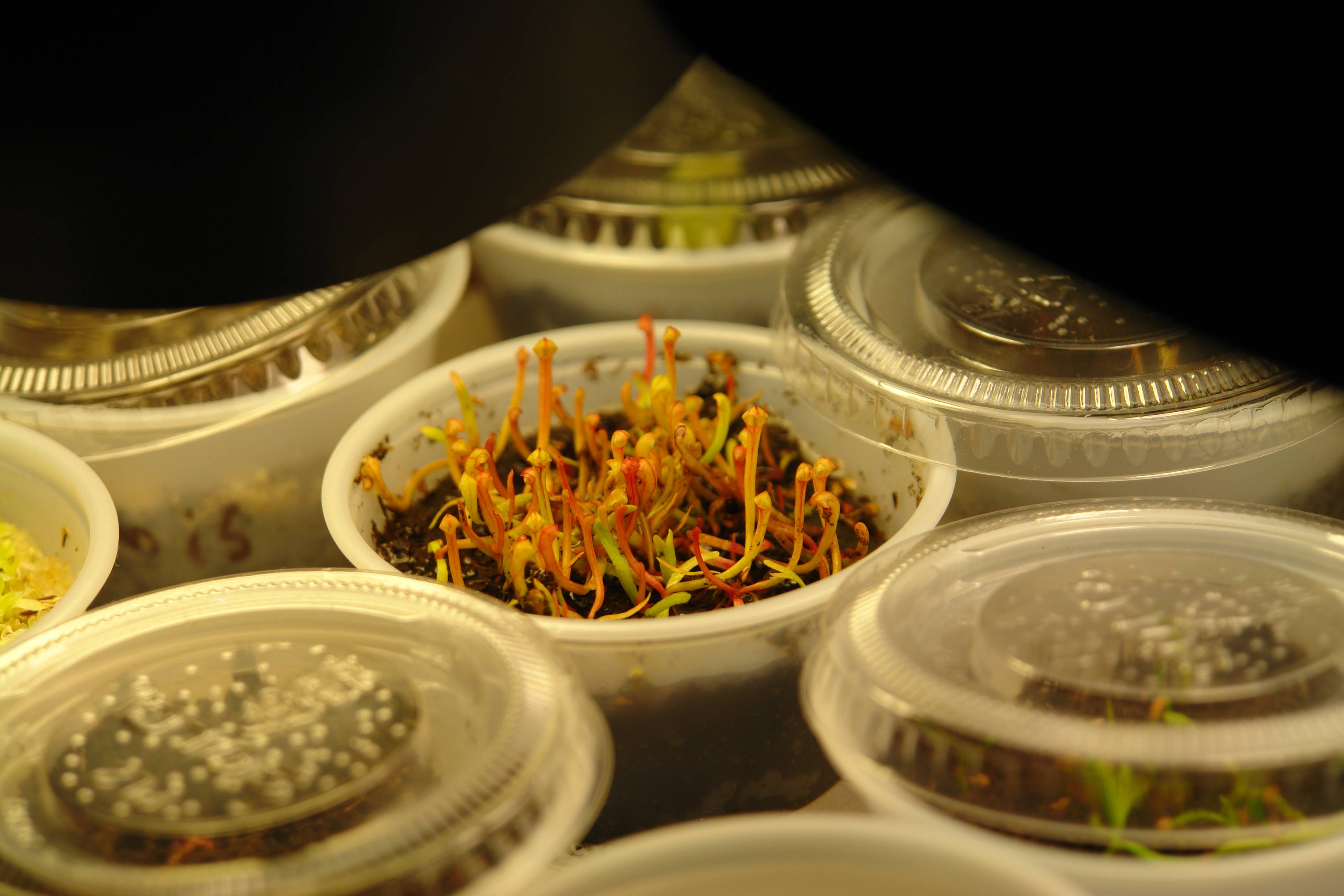 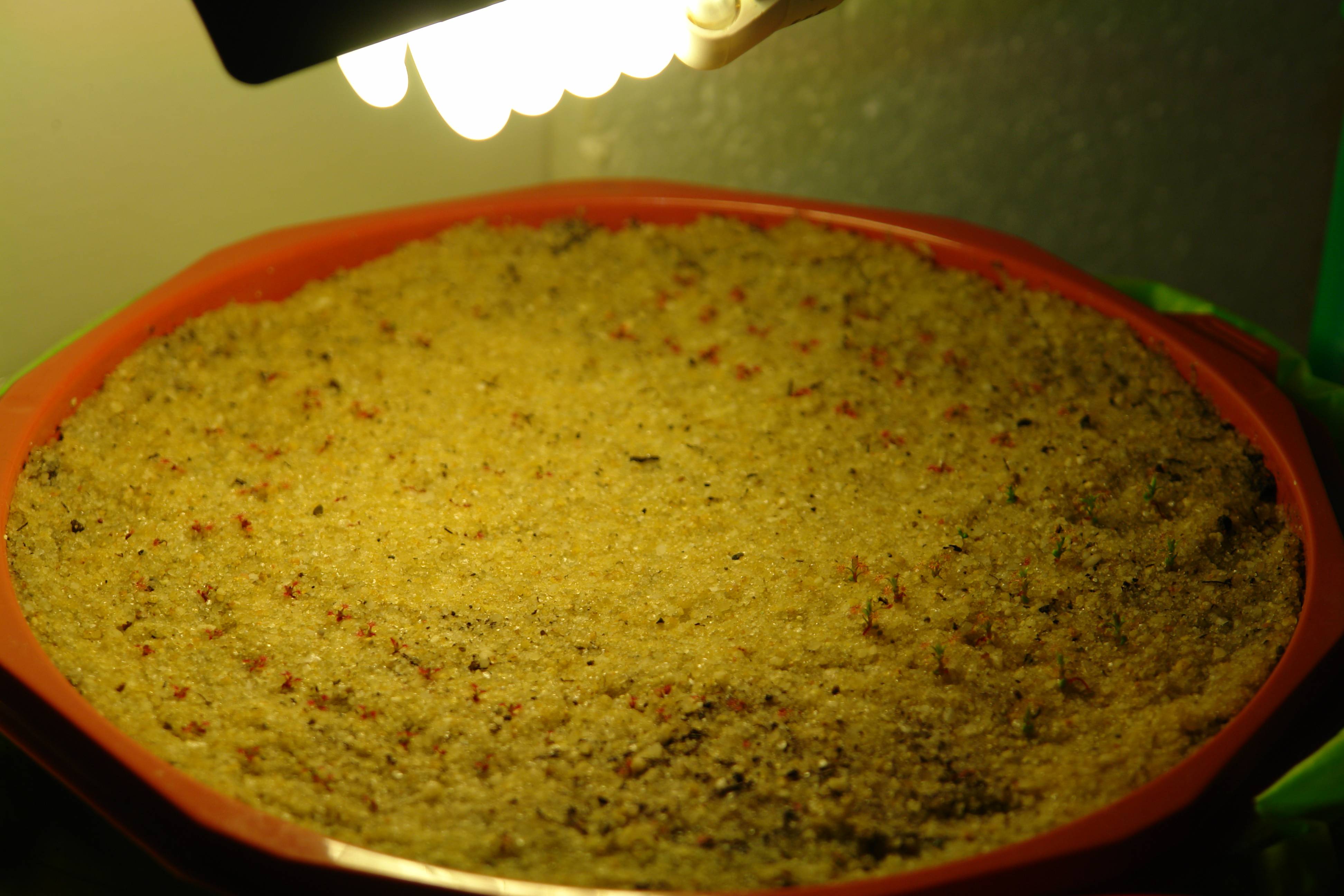 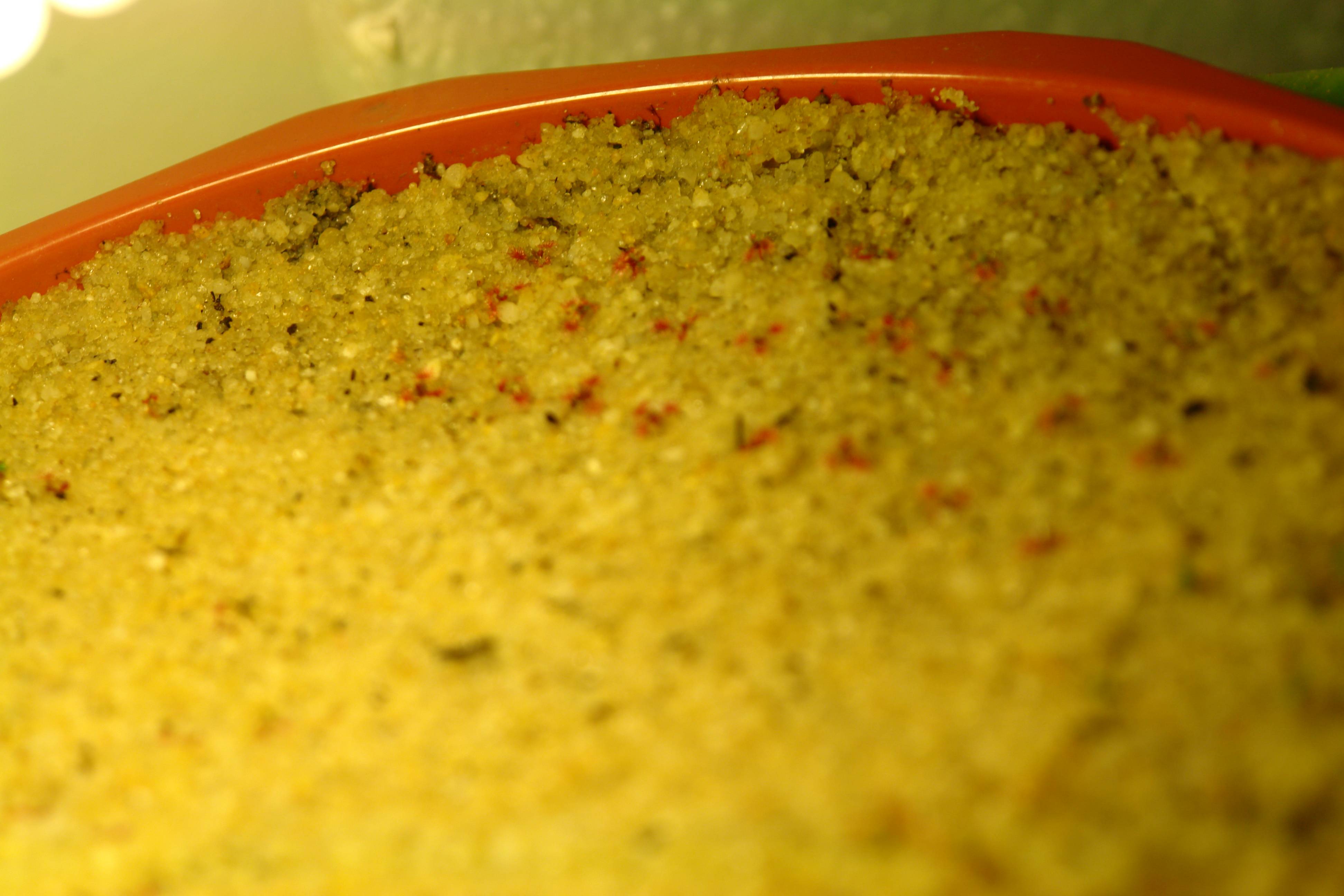 Live moss growing outside in temps of 50F-25F: 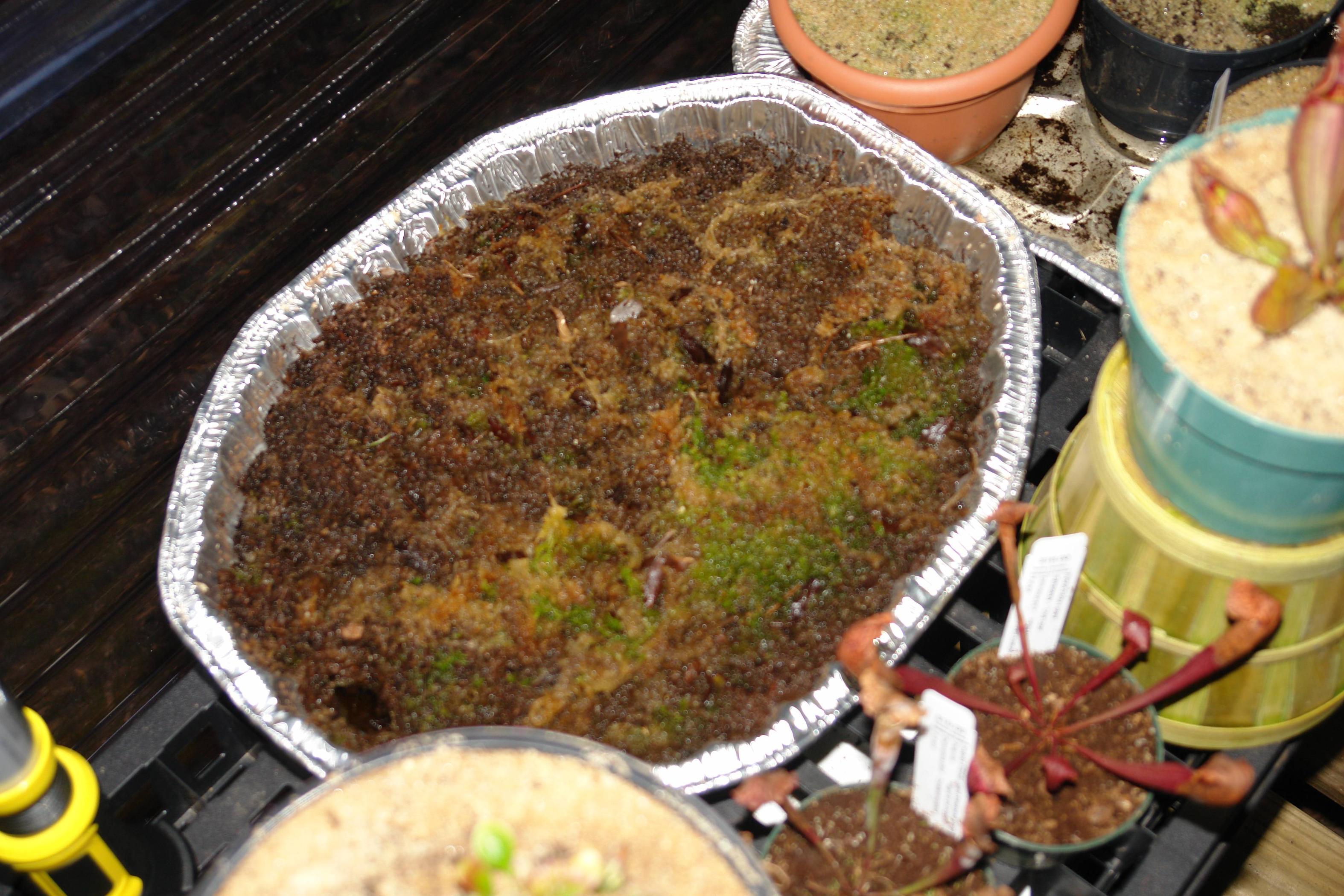 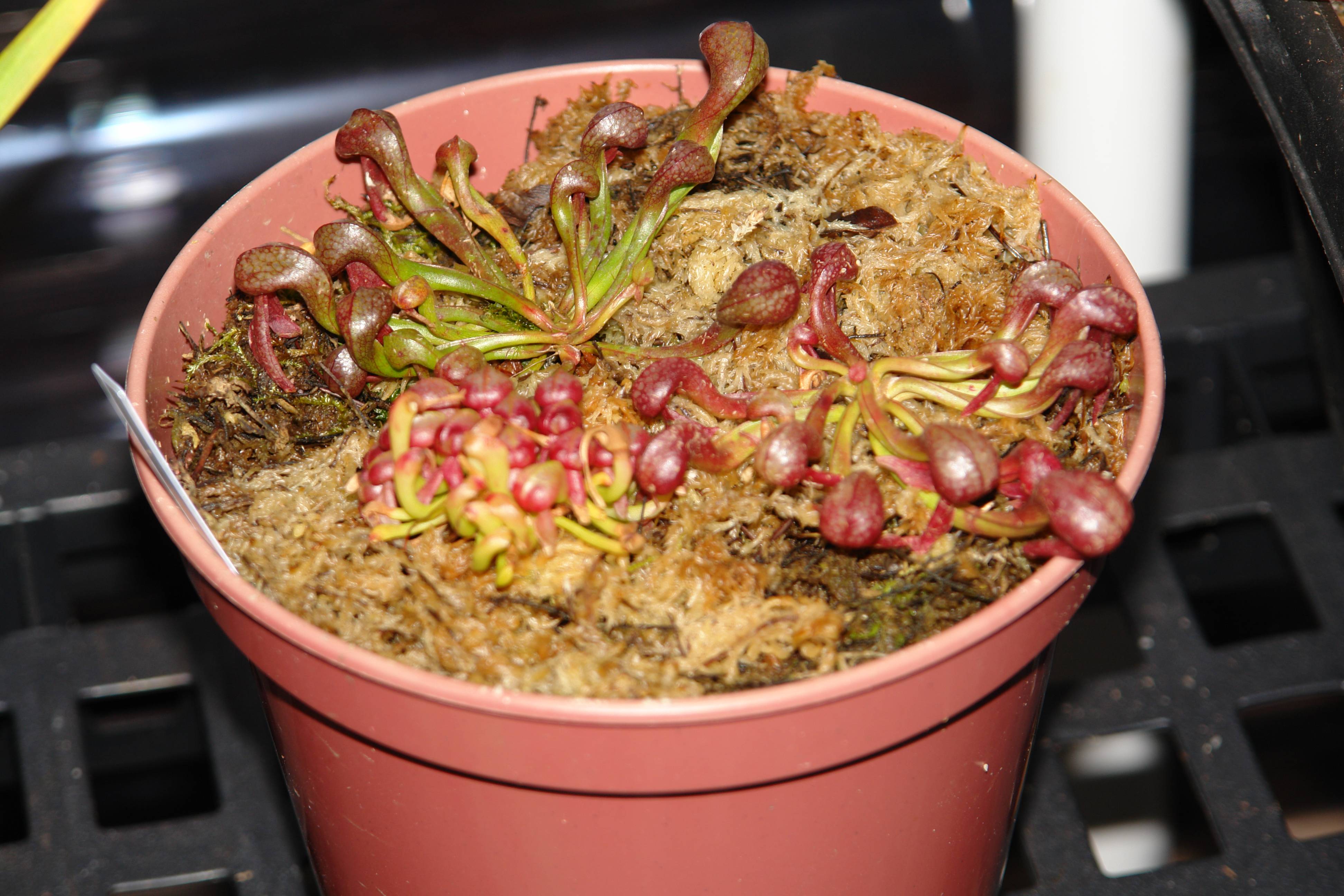 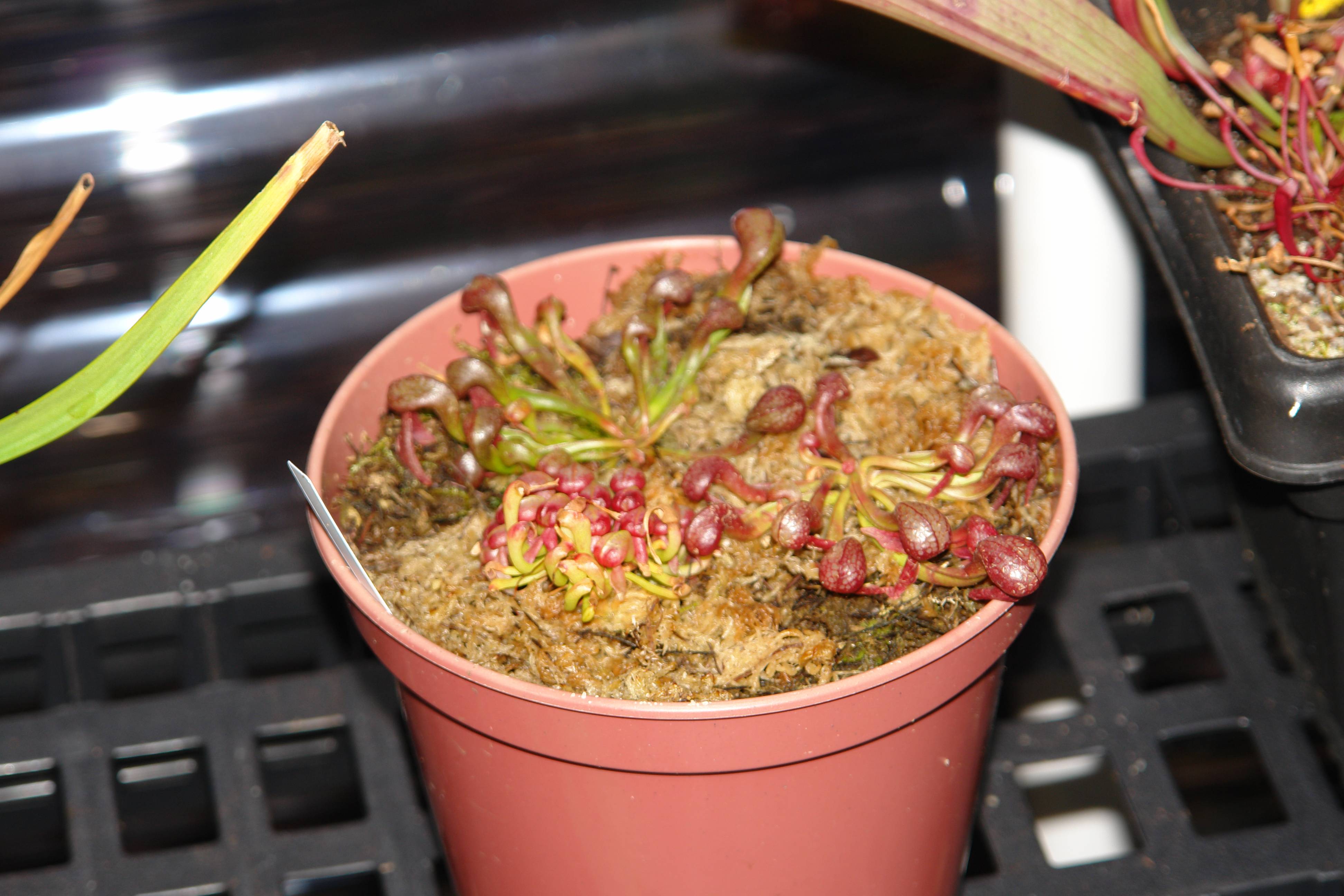 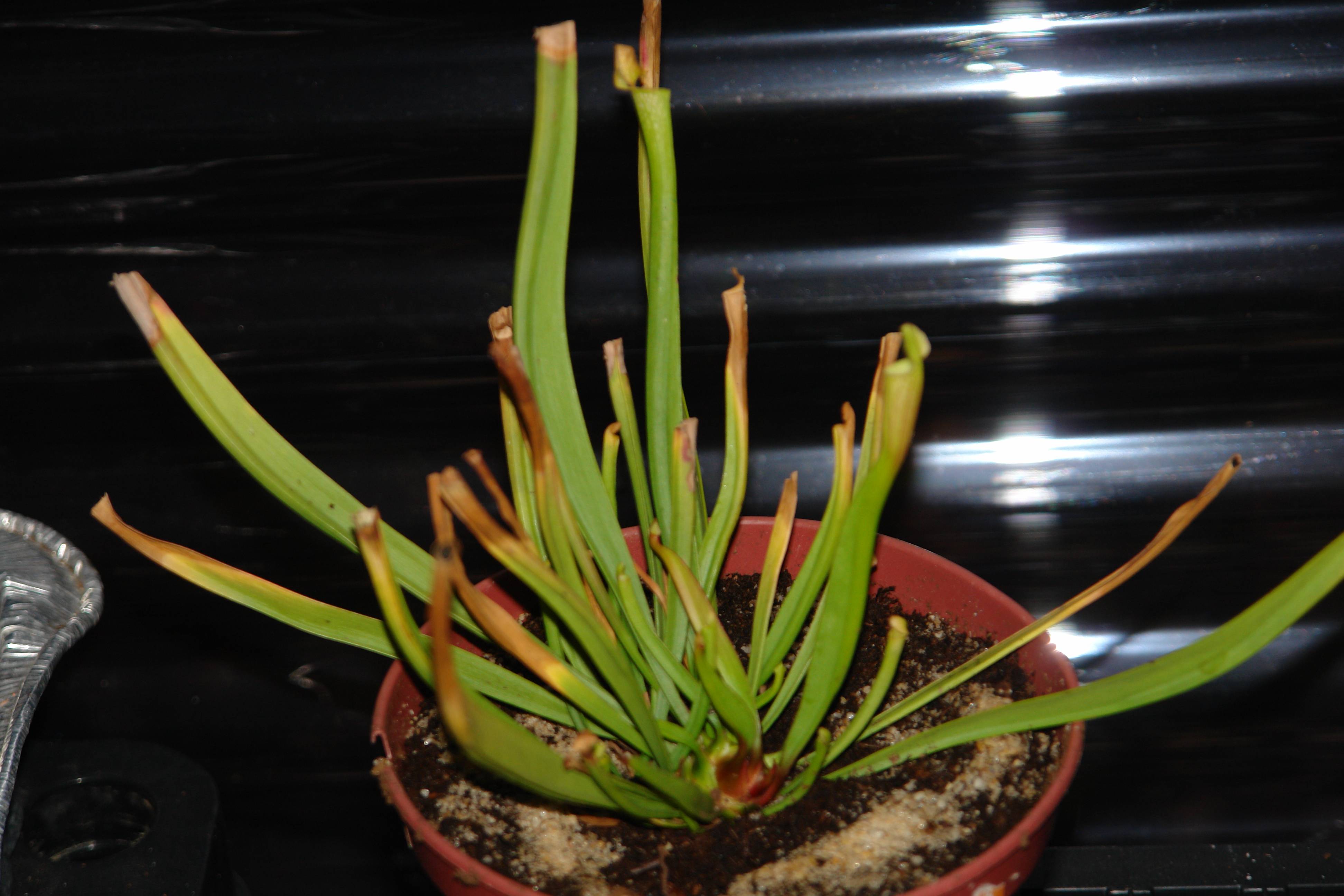 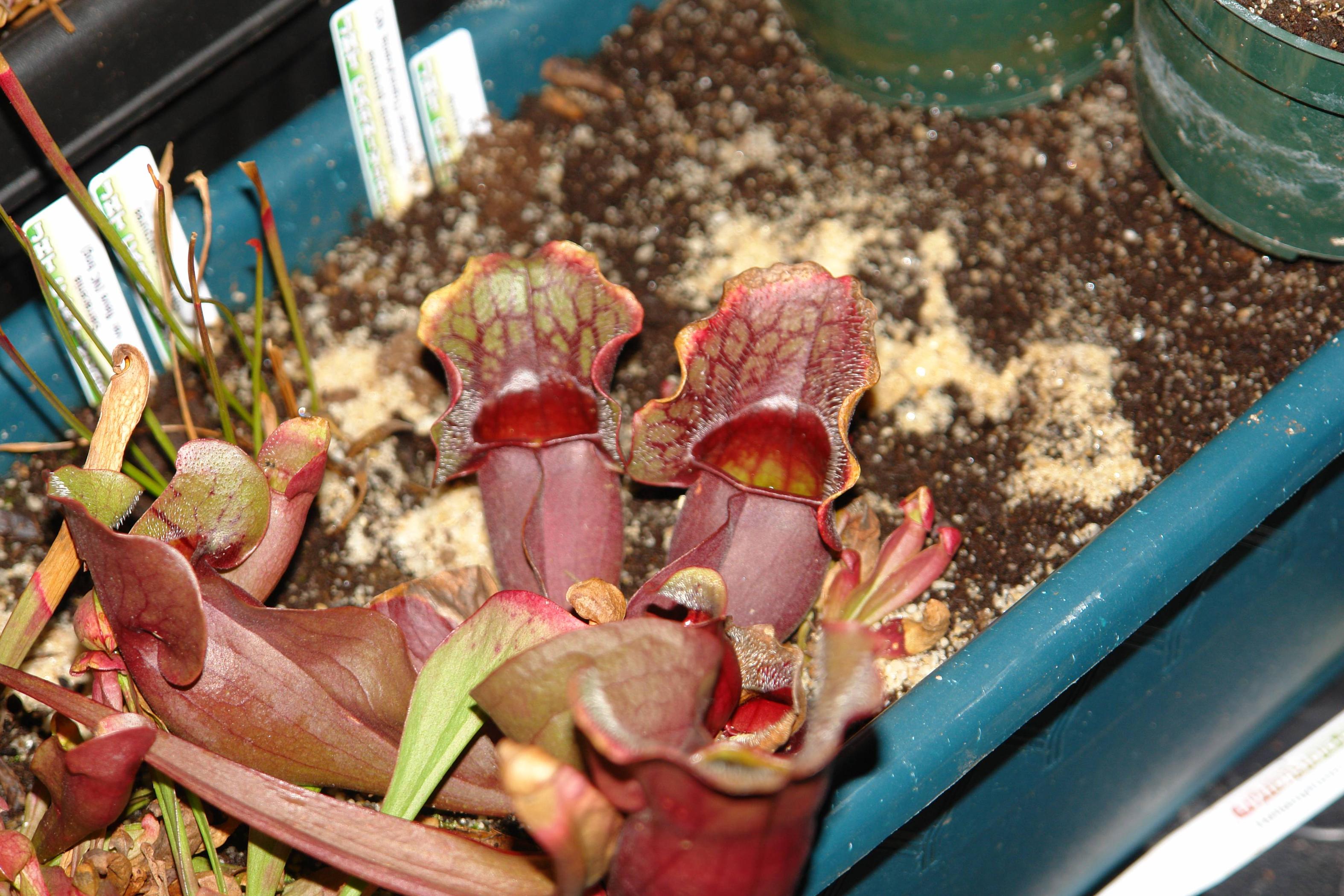 Looking real good jht! Looks like youve been really busy over the last month. Whats the small nepenthes with the red leaves? Love that purp and those little cobras.
J

Thanks! I finished the terrarium in a day, but then putting the plants in, and designing the area for each, and making space for more was hard.
The small nepenthe with the red leaves is a nepenthe Rajah, and there's also a smaller one next to it and that is n. lowii.

Thank you, that sarra purpurea is one of the biggest i have and the one with the most color at this time of the year. The cobras i'm new to growing them, but they seem to grow pretty well. They should be suitable for my location ( based on information i'ved gather about them). They are growing in all LFSM.

like the way you are growing such a large range of plants in one tank,i hope it works out for you,looking good

I hate bugs. Carnivorous plants get me.

Wow, quite an interesting mix!
J

Thank you, all the plants inside with the exception of the vft are tropicals, so they should thrive pretty well in there.

Nice, dude. I hope it all works for you in the coming seasons.
H

Nice lookin terrarium. That's a huge range of plants. Can't believe your flytraps are out of dormancy already. I still have another 2 weeks here.
J

mato77429 said:
Nice, dude. I hope it all works for you in the coming seasons.
Click to expand...

I hope so too! The real issue will be once summer gets here, i guess i will have to turn on the air, or use that little fan i have.


hazedshaman said:
Nice lookin terrarium. That's a huge range of plants. Can't believe your flytraps are out of dormancy already. I still have another 2 weeks here.
Click to expand...

The vft's arent out of dormarcy yet, they are all dormant, even the one inside the terrarium, i can tell is dormant by the growth it has, also temps go down to the 60f or lower during the night. And i think you meant 2 months.
You must log in or register to reply here.