I suppose it's about time so I'll start with some recent pictures. Quite a few actually. 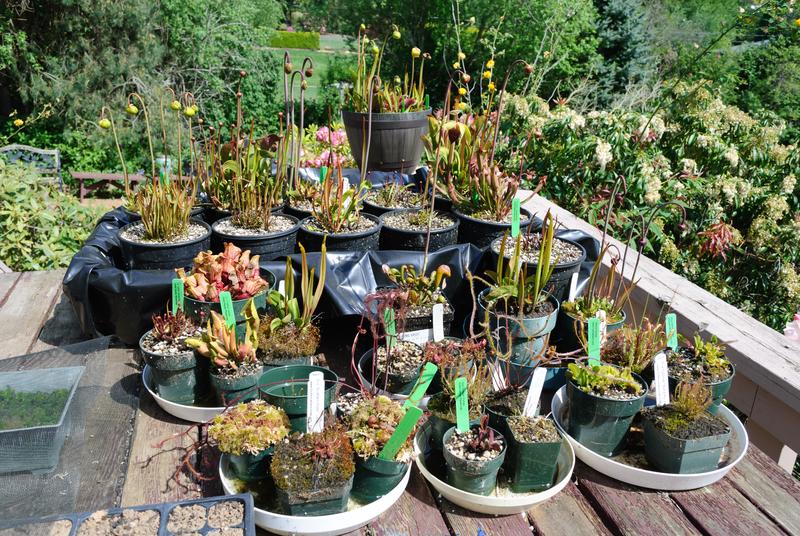 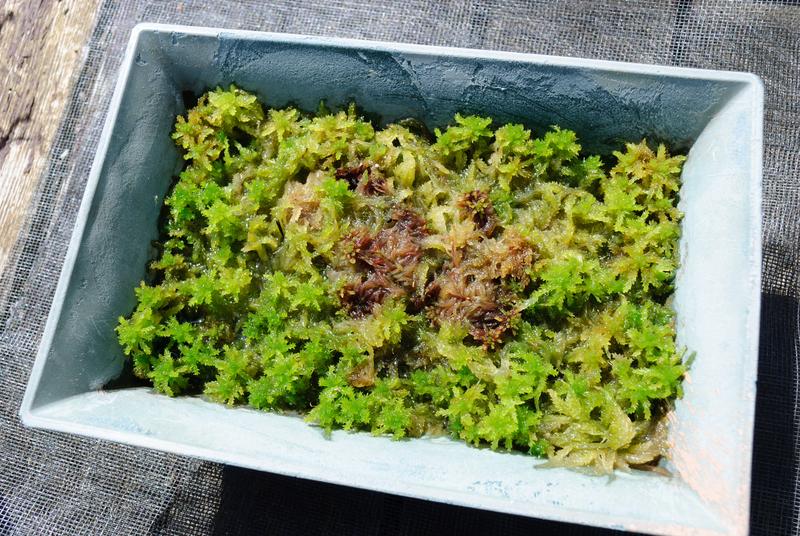 Some native Oregon sphagnum I'm growing with the outdoor plants, covered with netting to discourage those pesky birds. 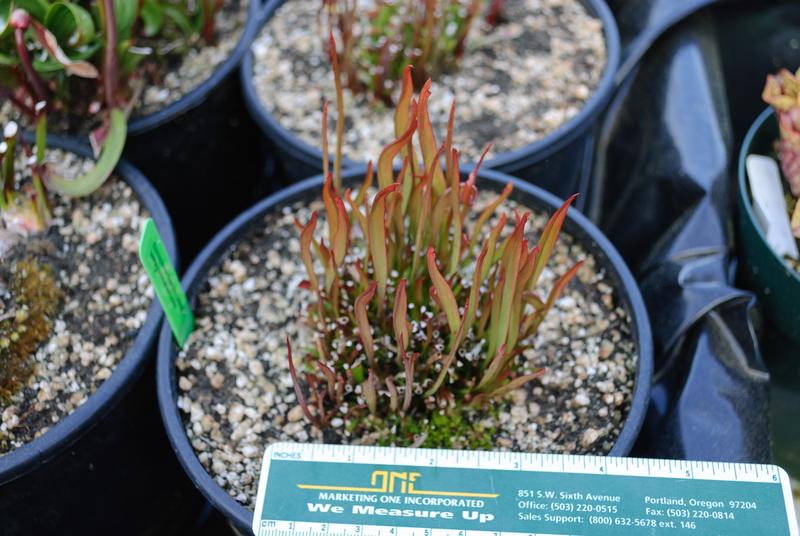 My crazy S. "Daina's Delight" growing more than 100 pitchers at a time from its 3" rhizome. 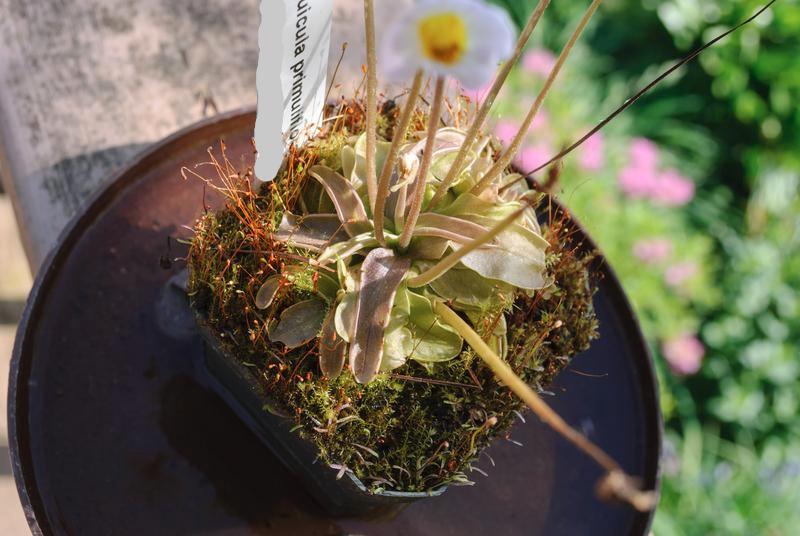 P. primuliflora enjoying being outdoors with some nice color developing on the leaves. 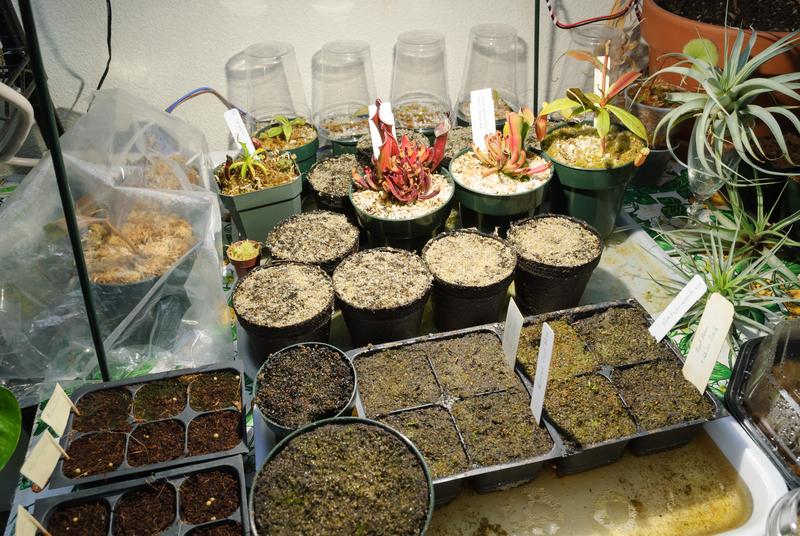 Plants and lots of seeds under my new LED light. Plenty of CPs, but also airplants and a few vegetable seeds. 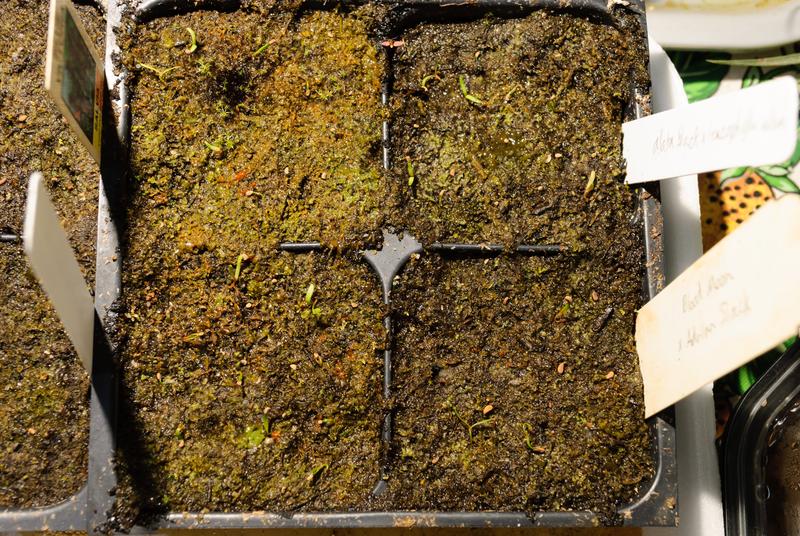 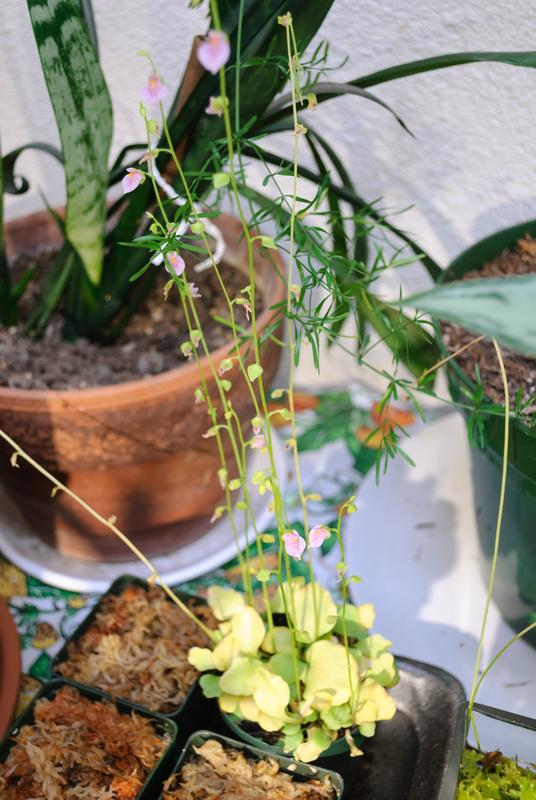 U. calycifida 'Asenath Waite' is a profuse flowerer, despite being grown for a while in too strong of light as you can see by the yellow leaves. 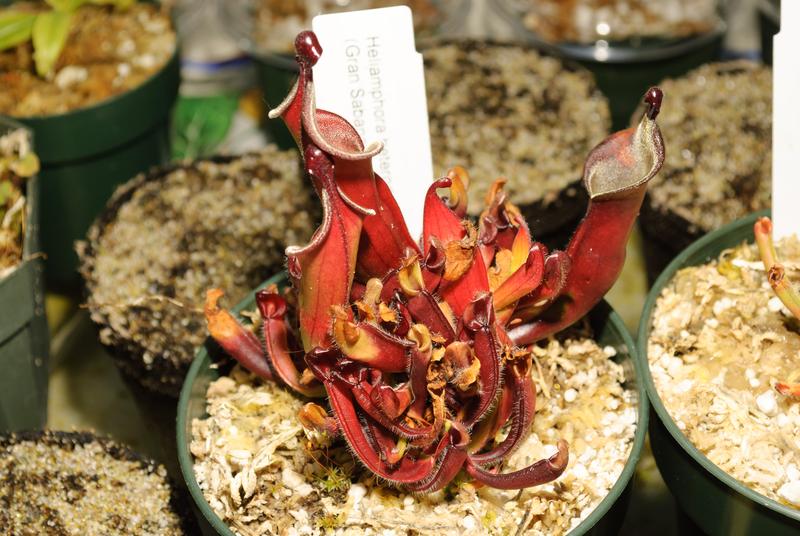 H. heterodoxa being grown at ambient humidity under extremely strong LED light. It's apparently supposed to be lime green. 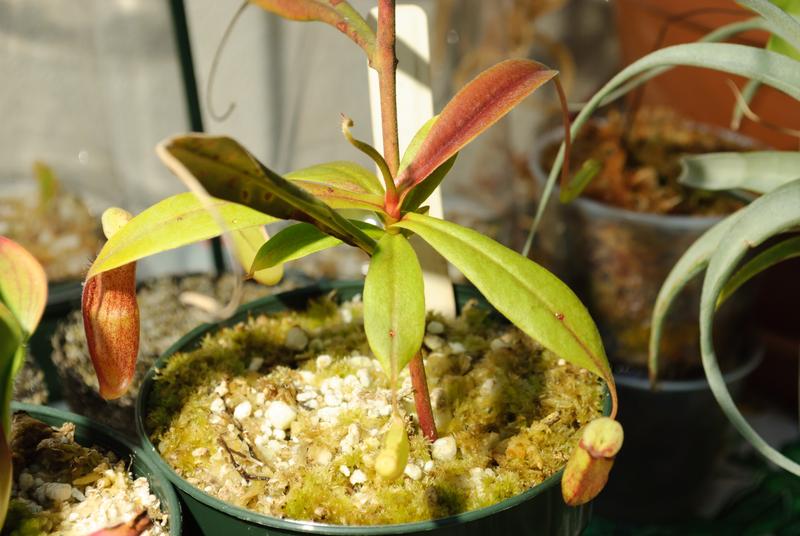 A Nepenthes grown from a cutting I received last year. Unfortunately the tag got lost and I haven't figured out what it is yet. It's pretty easy to tell which leaf grew after I moved it under the LED... 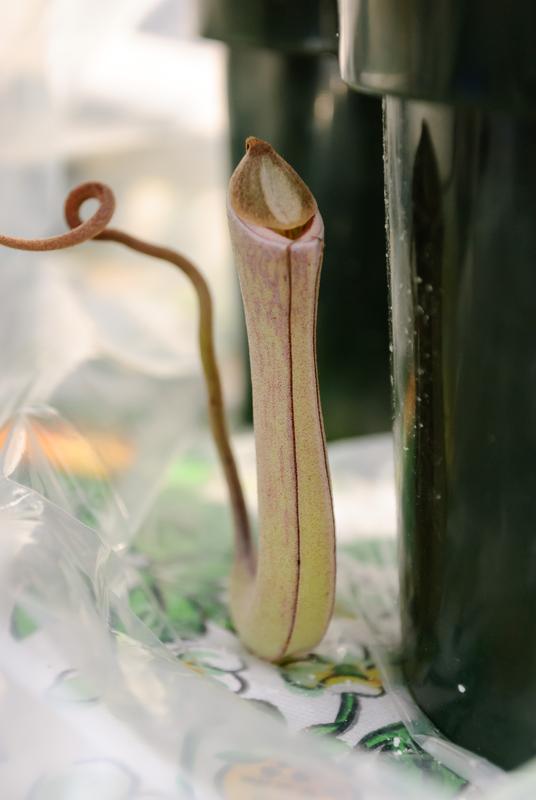 A N. albomarginata pitcher on a newly rooted cutting. It was just starting to develop when I received the cutting and I was expecting it to die back, but it continued developing and is now opening. The new growth point hasn't even grown 1/4" yet. Those are 4"x4" pots for scale. 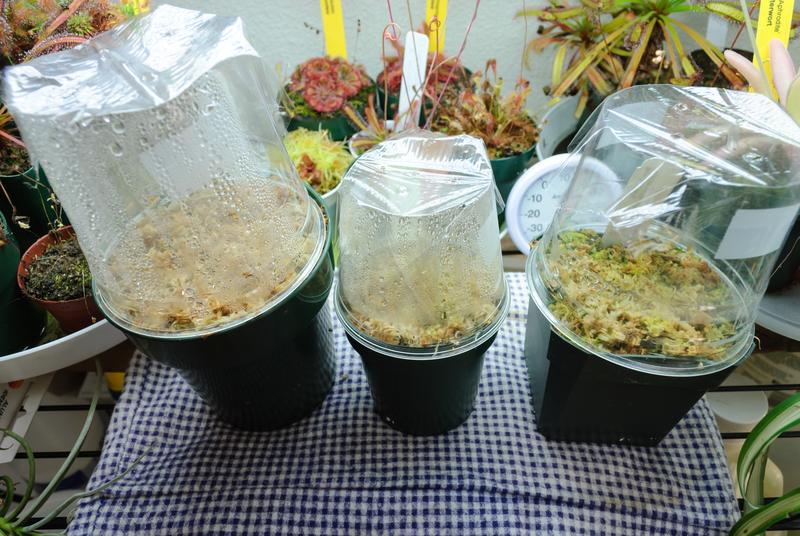 Attempting to germinate some Nepenthes seeds, surrounded by many sundews. 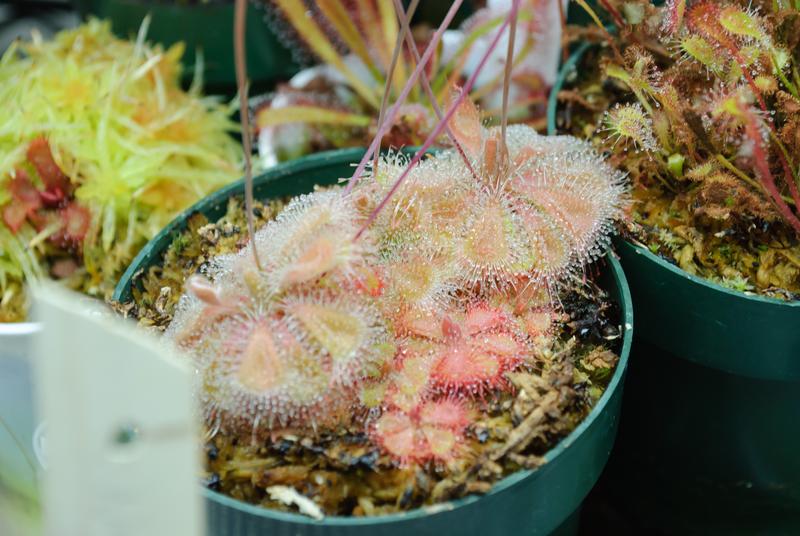 My profusely-flowering D. burmannii pot, about a year old at this point. 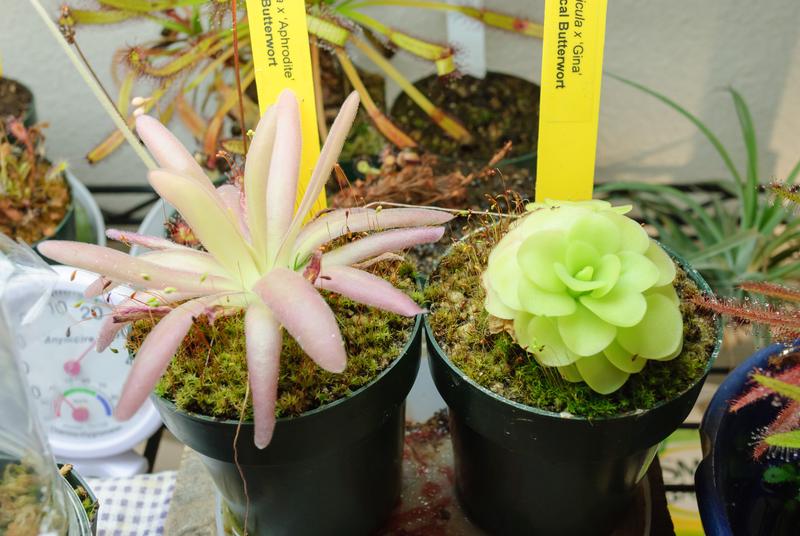 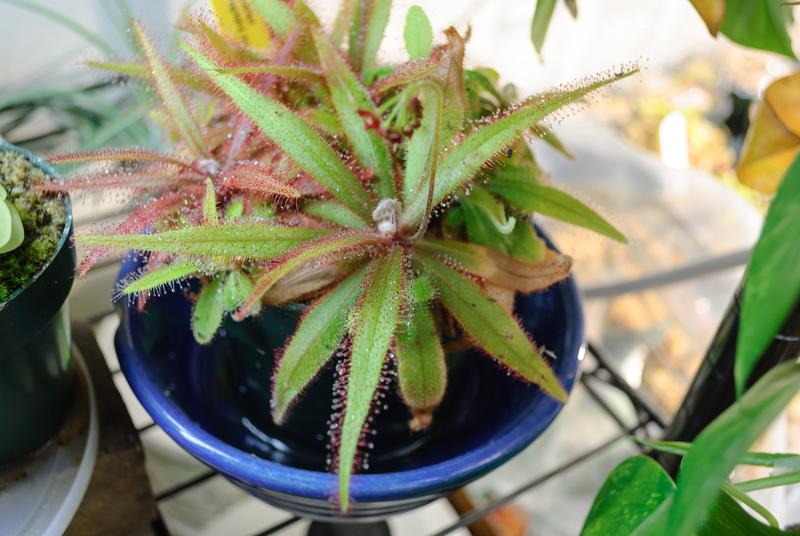 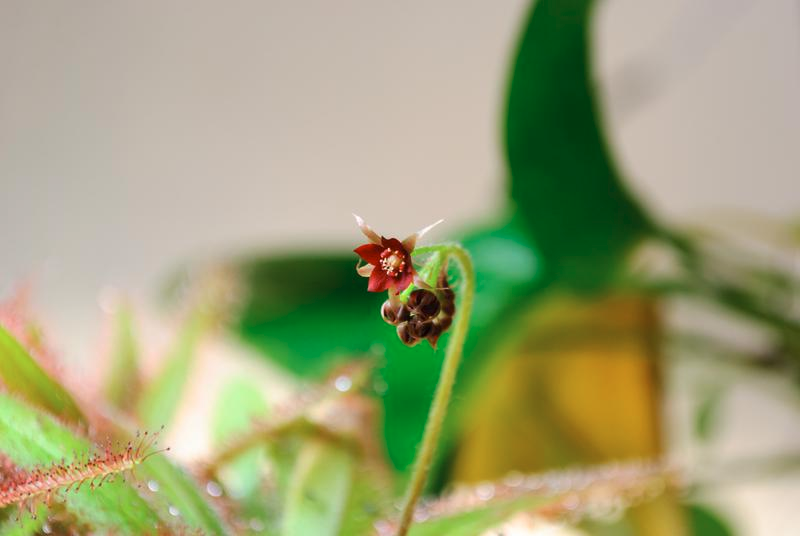 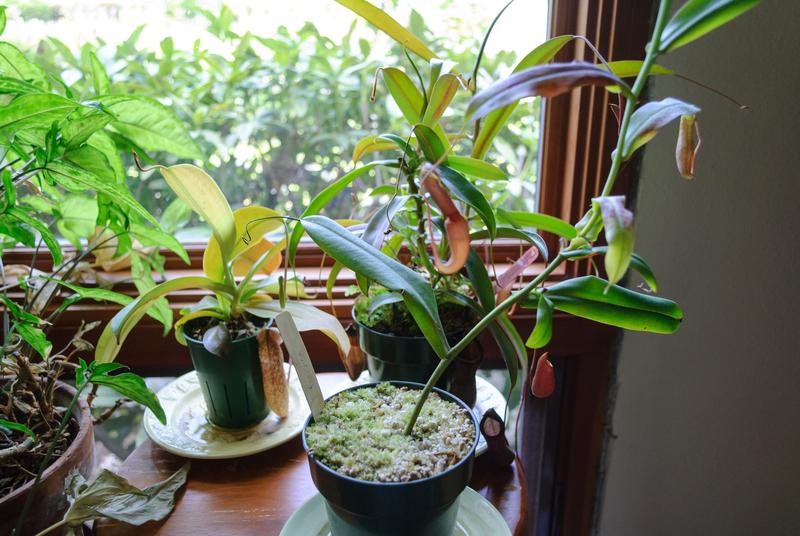 The current windowsill Nepenthes: N. ramispina, N. 'Miranda', and a poi dog. Unfortunately the N. ramispina has seen some abuse, with some light burn before moving it here and a fertilization accident. 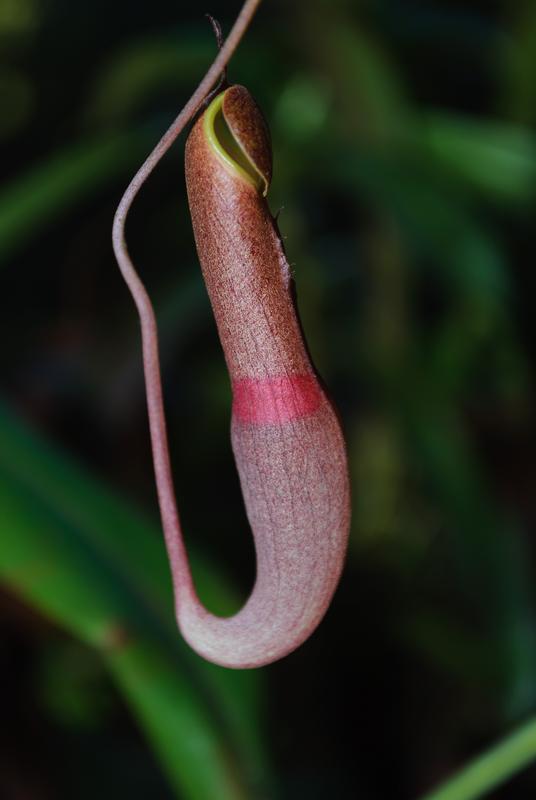 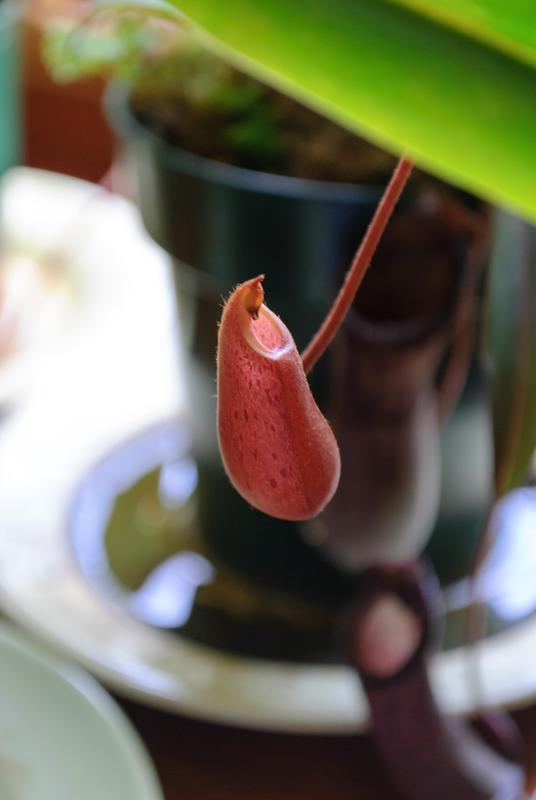 One pitcher on the poi dog failed to develop a lid for some reason. It's never happened before and I don't see any signs of it on other developing pitchers. 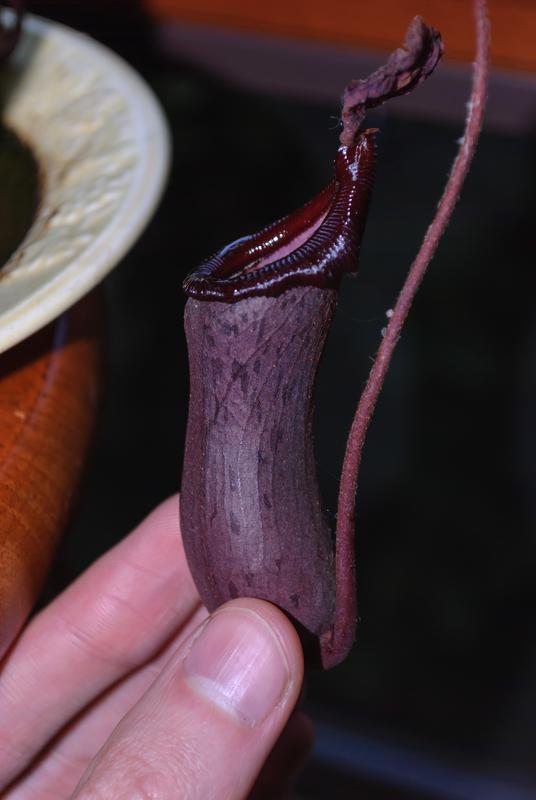 Some of the pitchers on this plant still look very good after more than a year. 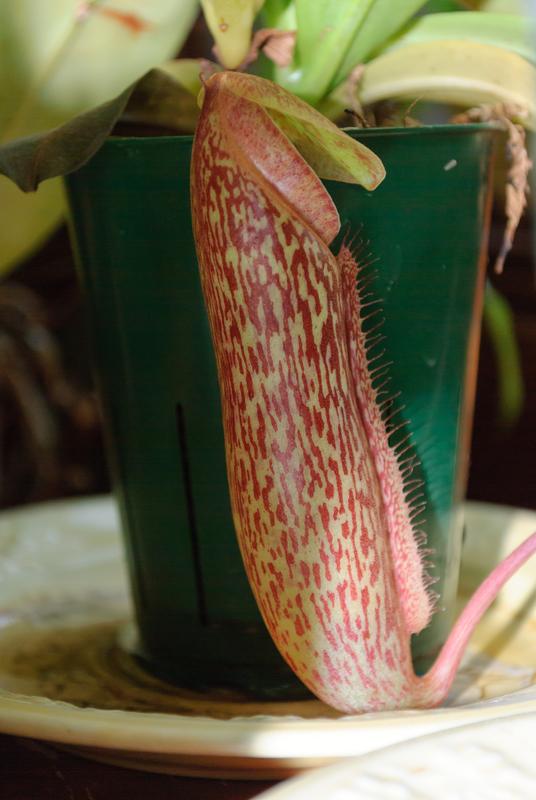 A newly opening N. 'Miranda' pitcher. It may be common, but it still looks very nice. Getting started with winter-growing sundews. D. hookeri and D. cistiflora. Not pictured is a D. zigzagia which already went dormant (hopefully it didn't just die) and some D. auriculata seeds I have waiting for fall. 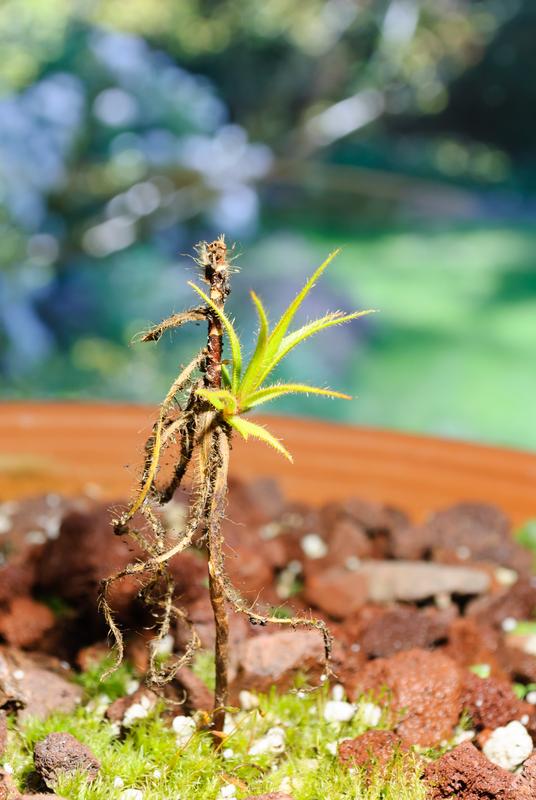 Roridula gorgonias, recovering from me finding out the hard way not to let it get rained on constantly. Botrytis is nasty. 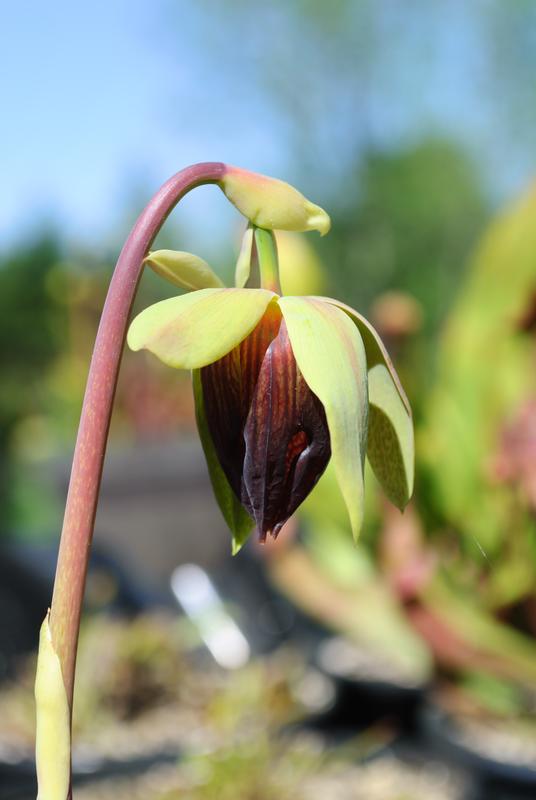 My first flower of the year, Darlingtonia californica (barring my Pinguicula primuliflora which never stopped flowering all winter.) 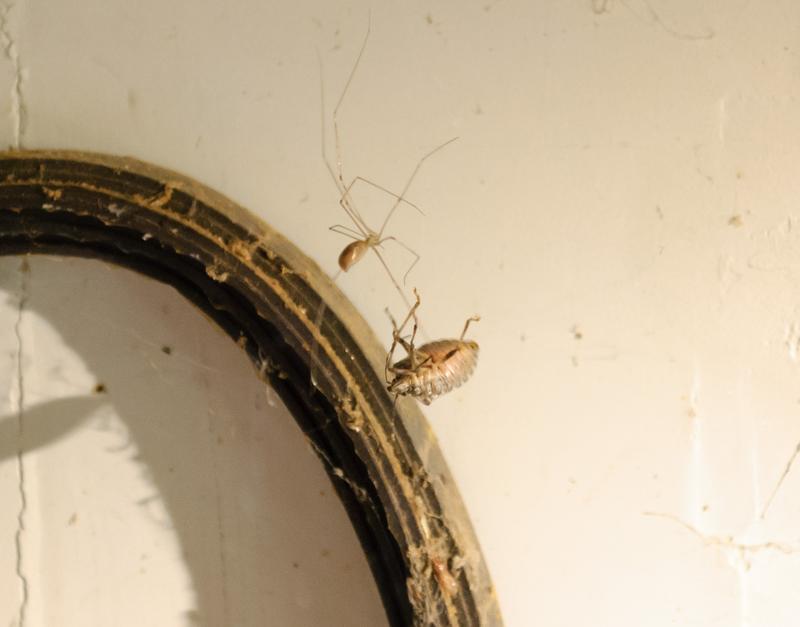 Very nice collection John! The outside setup seems to be working great. Your sarr seedlings are at about the same stage as mine. Exciting to watch them grow.

Yes it will be, though the germination rate hasn't been very good so far. First germination was several weeks ago and there are still quite a few ungerminated seeds, especially of the "Blood Moon" x 'Adrian Slack' cross.

How I started 3 years ago: 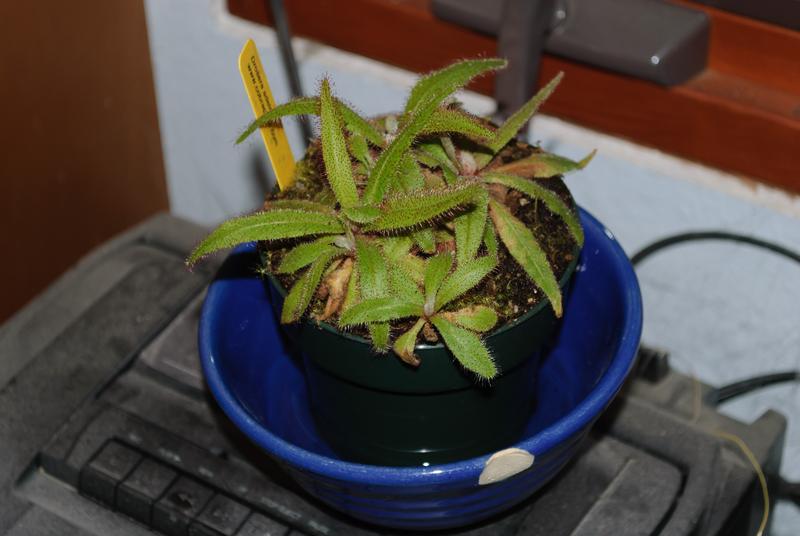 My first plant, which I got hoping I would be able to keep it in a north window. It's not enough light, even for D. adelae. 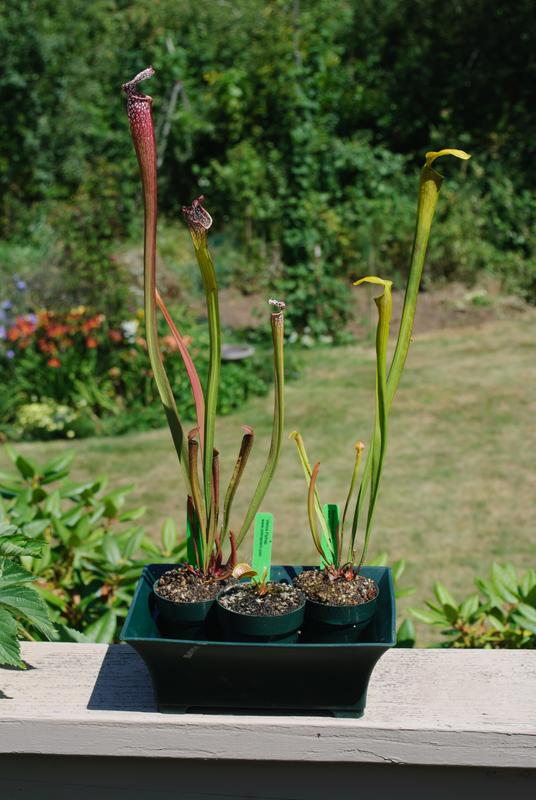 My first temperate plants I got a couple months later. I got a bit of a bonus here: The S. leucophylla turned out to be a 'Tarnok' as well as having a second S. rubra complex rhizome (I still haven't positively identified this one) buried underneath it, and later a D. rotundifolia seed germinated in the pot. 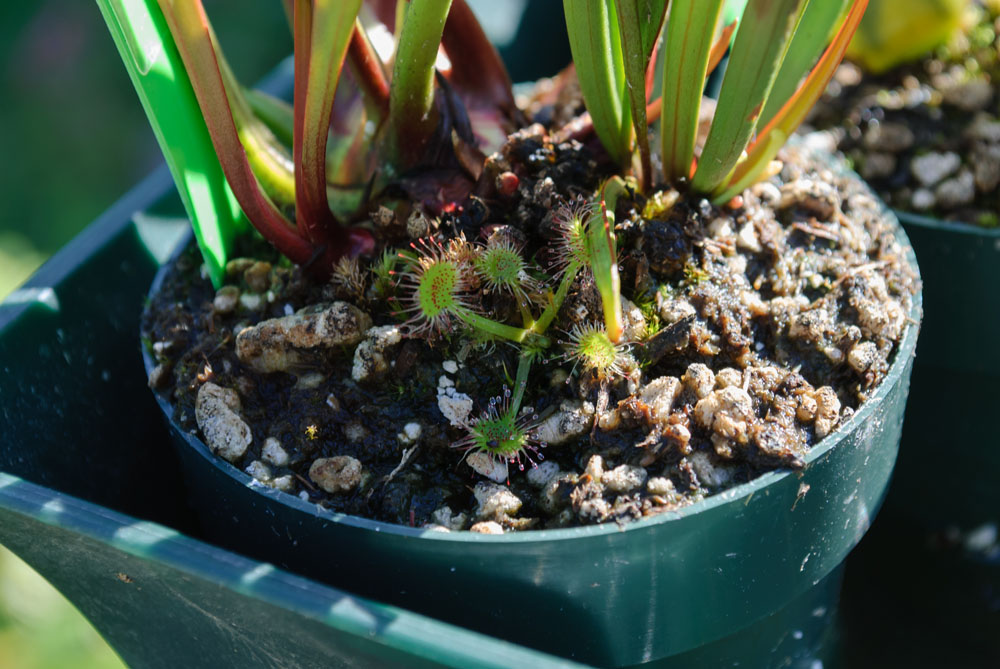 nimbulan said:
Yes it will be, though the germination rate hasn't been very good so far. First germination was several weeks ago and there are still quite a few ungerminated seeds, especially of the "Blood Moon" x 'Adrian Slack' cross.
Click to expand...

Give them time, don't give up on them. I have had some sarr seeds not germinate until closer to summer and some not until the following year. I never kept track if it is specific species/hybrid mixes that do this, but wish now I had to see if that has anything to do with it.

I'm actually wondering if it has to do with me stratifying for too long since I had those outside for 3 months. I've read that some Sarracenia, especially leucophylla crosses, can have lower germination rates with longer stratification periods.

If it makes you feel better, I just had quite a few seeds that have germinated this year... that were sowed last year

Nice. Good variety of plants. I swear U. calycifida has got to be one of the most vigorous of all carnivorous plants.

Thanks guys! I agree, Dexenthes. It has definitely been one of the quickest-growing plants I've owned, up there with Drosophyllum lusitanicum (which I managed to kill last year.) 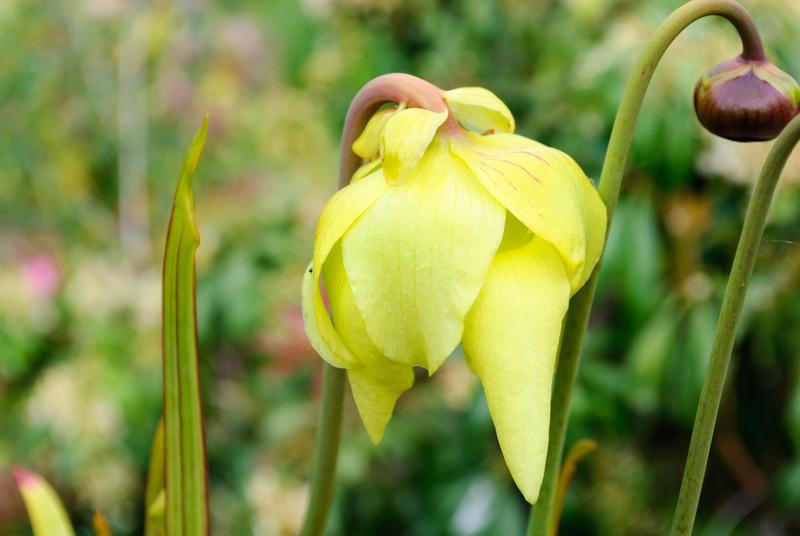 so beautiful! thats one thing sarracenia have over a lot of other CPS is their wonderful flowers.

Utricularia are certainly the only genus that can compare to orchids for spectacular flowers, and not that many species either. Sarracenia and Darlingtonia flowers are certainly unique though.

True, they do have flowers more unique than any other cp. My point was that there are lots of CP's with nice flowers, not just sarracenia and darlingtonia.

Its all subjective, but I love the how they (sarracenia) have such complex looking upside down flowers. What makes them even cooler IMO is that they are native to NA.

Awesome, man. You've got some great looking plants. I really like those dews and pings.

'Looks to be a very nice collection. I am glad that your Roridula is recovering.

I personally think that D. prolifera and its close allies have some of the best flowers of all CP's.

However, congrats on the lovely Sarracenia bloom. I am somewhat envious of your Oregon climate. I have yet to ever bloom a Sarracenia in Alaska.

Roridula are tough plants, but they sure don't agree with the rain here. I'd like to put the plant back outside, but I'll need to figure out a way to protect it from the rain this time around. It's in a huge pot so it takes up a lot of space and is hard to fit under lights - a problem that will only get worse as it grows.

Dexenthes, I wonder if the shorter growing season there doesn't give the Sarracenia enough time to build up energy for flowering?
You must log in or register to reply here.