Picked up a death cube at Lowes few weeks ago and let acclimate to my conditions. Found some new growth on the rhizome tonight and the old growth is beginning to brown so I decided it was time to repot. I dug up an old zen fountain and decided to make a make shift root cooling pot with a few spare parts laying around. Ripped out the under water pump from the fountain, added a large empty death cube, tubing, silicone glue and a pot with some LFS and voila!
We'll see how it holds out...

what is the large sarr in the back with the red top? so beautiful. nice darlingtonia too, hope it does well

I've got a magic window!

I have found over the years not only does Cobras not like the heat (Another idea on this later), they do not like to be waterlogged.

I have tried Cobras outside 2 or 3 times. They always perish for me during the summer. They where always potted in plastic pots. I decided to grow them indooors and have had much better results with this...... What I have done a time or 2 with growing them indoors, is around the beginning of fall, if I kept the pots too wet I would rot the roots of the plant. Again in plastic pots.
What I've been doing with them now is have them growing in orchid pots with a lot of lava rock added. They have been doing great this way. In fact I was looking for a death cube today when I was at Lowes because I want to try one in an orchid pot and place it outside. Maybe with the roots not getting a lot of air it contributes to overheat them.

Small Cobra I bought from a death cube about 2 years ago starting to come out of dormancy. It was 1 plant when I bought it. Now I have 3 growth points. 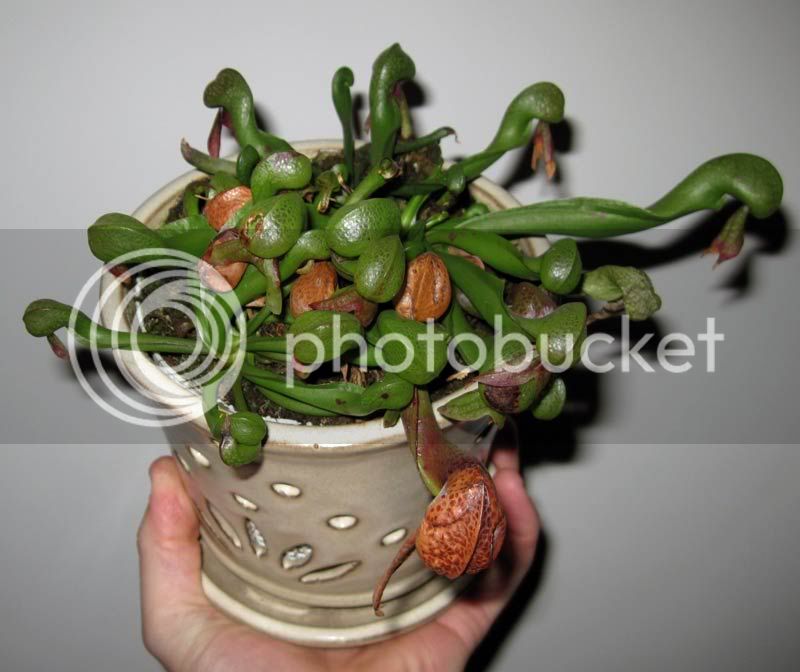 I've given up on Darlingtonia. I received mine last summer, and it has not grown at all. The tops of the pitchers are brown, but the bases are still green. But it's been in suspended animation for half a year and it will likely die when the summer heat kicks in. Heck, it doesn't even produce digestive enzymes for such a complicated plant.

Cephalotus on the other hand looks really awesome and appears to be more successful in growing for me.
F

elgecko said:
I have found over the years not only does Cobras not like the heat (Another idea on this later), they do not like to be waterlogged.
Click to expand...

Beautiful plant gecko, is that a ceramic pot you're using in the picture? I was under the impression that Darlingtonia was actually extremely heat resistant, able to take direct sun and heat into the 100F as long as it's roots are able to be kept cool. Which is why it has been found growing so well on the banks of running rivers where water continually washes over it or at least it's roots. It's soils have also been found to be quite alkaline in comparison to the usually acidic soils generally found with CPs.

My first D. californica was indeed waterlogged and did not receive fresh flushing of water and sat in a rather bog like environment and did poorly. This time I wanted to try continually running water so that the conditions are not stagnant and air reaches the roots. The only thing I may change is that I may add perlite to the mix to air out the roots even more. Worst case this will become a $5 learning experiment

CPsam said:
what is the large sarr in the back with the red top? so beautiful. nice darlingtonia too, hope it does well
Click to expand...

Thanks, that is my S. "Avatar". It lagged last year but really took off this year. I posted these in an another thread not too long ago.

F R e N c H 3 z said:
Thanks, that is my S. "Avatar". It lagged last year but really took off this year. I posted these in an another thread not too long ago.

Shouldn't It Be Blue?
What's The Parentage? It looks nice
F

awgaupp said:
Shouldn't It Be Blue?
What's The Parentage? It looks nice
Click to expand...

The parentage is unknown but it's believed to have some S. flava var. atropurpurea in it. As for the name, the person who coined it did so before the movie, quite possibly even before it was in production.

I was forunate. I received one from a hobbyist and put it in a planter and kept it outside for ~7 months of the year. Once established, the plant was indestructible. The following year, after a proper dormancy, the plant sent a stolon and sent up two flowers. The year after that its ent out more stolons and flowered. Our temps did exceed 90 F a few times, enduring 70's & 80's for the summer. They all died, along with several VFT's & Sarracenias, from an ill-fated dormancy in a co-worker's unheated apartment.

I don't know if the Darlingtonia will really need that cooling system if it's going to be grown indoors. I don't think it will ever get that hot.

I live in a mild climate, so I guess I can get away with murder, almost, with these plants. I have killed several, but I got two now in a huge 10 inch glazed pot that are doing quite well. I do put them in the house during a heat wave, and they seem to appreciate the break.

While reading issues of the Carnivorous Plant Newsletter from the 70s it says that Leo Song and other determined that 21°C was the maximum root temperature that this species will tolerate. As long as you keep the root temperatures below 22°C the air temperatures could be significantly higher. How you keep the root/soil temperatures low enough is a matter of choice affected mainly by the growing environment. What works in the high desert of the southwestern United States may not work for someone in Malaysia.

The mountain populations have an affinity for serpentine seeps while the coastal groups can usually be found in Sphagnum bog with water flow. The roots may want oxygen which they'll get less of in standing water.

Of course, it helps to EDIT first, before hitting "post"--- "hose" should be "house".

I found a nifty temp conversion chart, for those permanently stuck in Fahrenheit: http://lancaster.unl.edu/food/ciq-celsius.shtml
You must log in or register to reply here.