Several years ago, I set up an experiment to see if D. schizandra had a preference with media. I posted my results over here & based on my results as well as other's comments, I swapped all of my D. schizandra's into non-peat media's (and today all of my schizzies are very happy in 100% live LFS).

Last September (09.12.09), I set up an experiment to see if D. prolifera did better / worse than it's cousin with varied media. While the plants went through various stages of growth, here they are as of a few days ago: 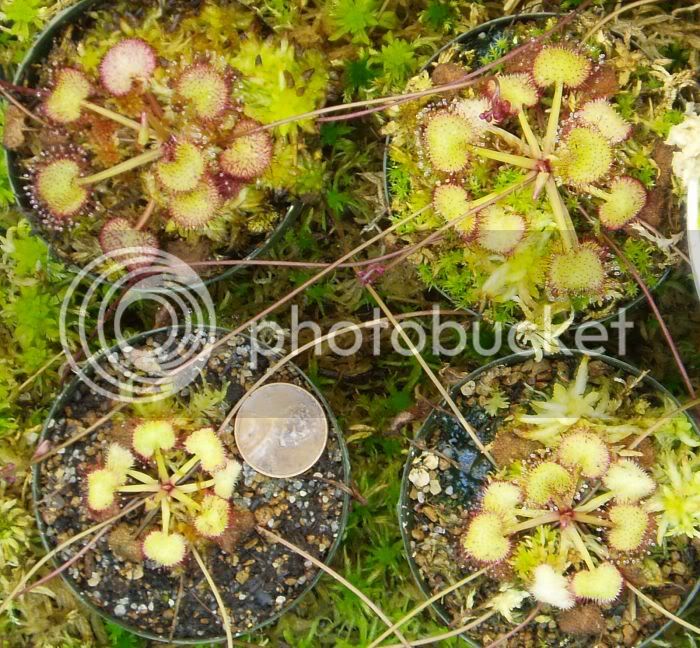 All plants were almost exactly the same size when I started the experiment (my apologies for poor pic quality). Media in each pot:

Fairly soon after I potted the individual plants, the original leaves on each died back. However, the leaves in the 2 peat-based pots died back first and a week or two later, the leaves in the LFS-based media died back (but more gradually). Other than this period of a few weeks when the peat based pots were regrowing and the LFS pots were dying back, the LFS-based plants have always appeared healthier than the plants in the peat-based media. The leaves are a darker color and generally larger - both in pad size and overall petiole length. I found that both plants in the peat media had pads that were always somewhat lighter than the other two - giving a bleached appearance.

IMO, the peat-based media's were consistently inferior during the seven months of the experiment with the pot having the highest concentration of peat (lower left) being the worst performer. The two LFS-based media pots were similar in their growth patterns. Some differences could be seen on a week to week basis but overall they appeared roughly equal. Each of the plants put out a significant number of runners (flower stalks...). Since I didn't notice any real differences in the runners, they didn't seem to be an indicator of health.

All 4 pots were housed in a 10 gallon aquarium under T-8 shoplights in my basement for this period. This environment, in general, has been very conducive to good growth for all three sisters (translation - they grow like weeds down there). To maintain a good level of humidity, I generally keep a layer of live sphagnum growing in between the pots of the various Neps, Dews, Utrics & Heli's growing there. In this layer, I've allowed feral prolifera to spread at will & there are anywhere from 2-3 in some tanks to 10-20 in others.

Although, just as my media experiment with D. schizandra couldn't really be considered truly statistically significant or valid, this may provide a starting point for others who are pondering what media mix to use...

I'll have to do some repotting.
I assume dead LFS works equally?

Help! Hard white substance on the base of D. Multifida Extrema arm