Claims that Cannabis is Para-Carnivorous

This thread is in no way intended to be an endorsement of illegal marijuana use. Indeed, one could infer from this discussion that consumption of trichome resin is harmful.

One internet writer showed photos of cannabis trichomes, claiming: "There is no other plant like this in nature". 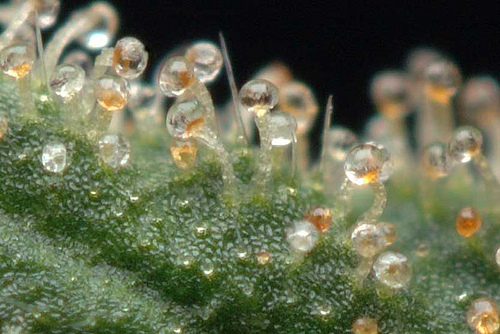 I immediately thought of the trichomes of Drosera.

I found another writer claim:

Trichomes containing sticky oils are what defines Cannabis and Hops from other forms of Celtidaceae. In my research on Trichomes, I came across many plants the contained parallels between them and Cannabis in the sense that they all contained trichomes with sticky residues contain within them. The term that is used to describe plants that contain Trichomes with sticky residues is proto-carnivorous. A proto-carnivorous plant (sometimes also para-carnivorous, sub-carnivorous, or borderline carnivore), according to some definitions, traps and kills insects or other animals but lacks the ability to either directly digest or absorb nutrients from its prey like a carnivorous plant. The morphological adaptations such as sticky trichomes or pitfall traps of proto-carnivorous plants parallel the trap structures of confirmed carnivorous plants. A 1995 paper published in the Journal of Biosciences detailed the evidence that the glandular bracts played a distinct role in the defense of the flower.
...
It is thought that these plants that have evolved protocarnivorous habits typically reside in habitats where there is a significant nutrient deficiency, but not the severe deficiency in nitrogen and phosphorus seen where true carnivorous plants grow. It is my belief that Cannabis falls within those guidelines. Cannabis has the exact same relationship with its prey as the Roridula group of proto-carnivorous plants does when left in the wild. The plants in this genus produce sticky leaves with resin tipped glands that look similar to those of the larger Drosera plant. However, the resiny trichomes are unable to carry digestive enzymes.
Click to expand...

A fly on cannabis trichomes: 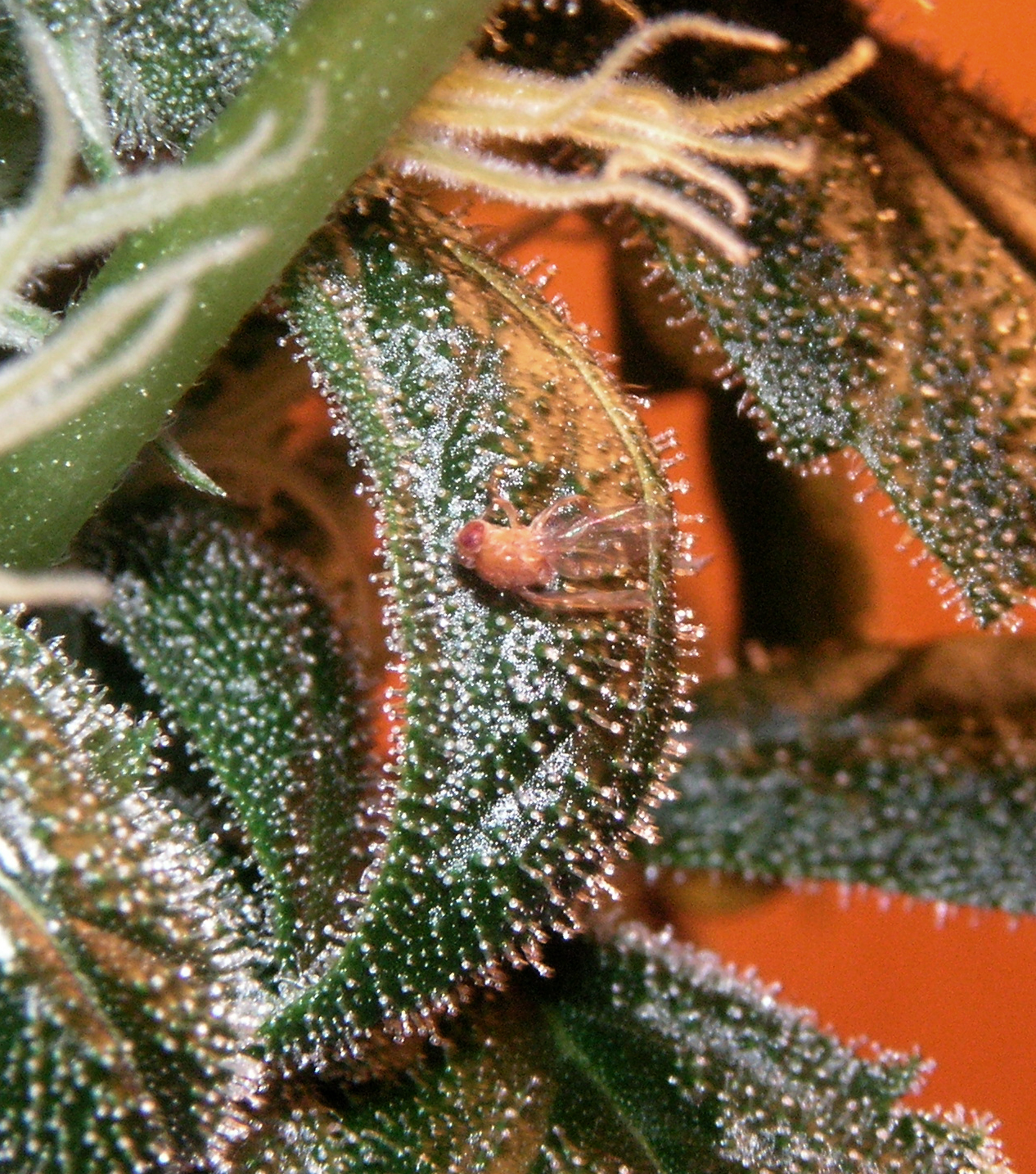 "Gnats are one of the few insects commonly seen stuck in resin whether indoor or outdoor grown. This is Bubba Skywalker outdoors. "
Images tagged with #MelFrank on instagram

As we know, carnivorous plants' secretions incapacitate or retard their prey's neurological systems. This could be a good reason to avoid consuming the chemicals from the cannabis secretions.

I think the author confused his own munchies with carnivory in plants....

You could argue that spruce trees are paracarnivorous, because they trap insects in their sap and save them for later.

Im always very skeptical about "paracarnivores" because the boundaries on this classification are generally unclear and
Left to situational speculation.
However, I have wondered the very same question for a few years now. They do have a striking resemblance To drosera, but they do not move like them, and there is no conclusive evidence that the glands can absorb nutrients, Nor secrete digestive juices. Most likely these plants produce the resin as an animal deterrant, maybe it works on a small scale with insects too. Either way, its a really interesting theory and Ive wondered the same.

Now, all we must smoke our droseras to see if the same principal applies backwards..
Last edited: Feb 7, 2016

Particularly With regards to insects, don't forget the nicotine itself -- a poisonous substance which makes for a highly effective insecticide.

I read that roridula was discounted as a carnivore for years until its symbiotic relationship with the assassin bug was observed , I wonder if such a relationship could exist with wild cannabis and other sticky plants , as many can absorb nutrients through the leaves and may be able to use insect poop
Last edited: Feb 7, 2016

Trichomes are just glands. In cannabis they are used to produce both various cannabinoids and terpenes. The purpose of this is, as far as I know, thought to be defensive but not in a carnivorous or even protocarnivorous sense. Terpenes can be found in many plants, they are essentially the oils that you smell when a plant has an odor. Terpenes are capable of temporarily altering brain function which is why we use them in aromatherapy practices (lavender, rosemary, etc.) Anyways terpenes evaporate during the day releasing their odor and warning potential threats to the plant to stay away.

I believe the occasional stuck insect is just a coincidental side effect. Cannabis is wind pollinated so it doesn't need to attract insects. Also given the vast geographical range in which cannabis grows and is capable of growing I think it would be hard to say for certain that it tends to grow in nutrient deficient areas. It has been established in almost all parts of the world fairly readily.

I suppose someone will be adding Petunias to this list before long......
C

Does this tomatoes and other plants that are fuzzy are protocarnivores too, because insects get stuck, die, and fall off where the plant absorbs them through the roots even though there isn't any evidence that the point of the fuzz is to catch insects for eating as much as it is to keep insects from eating the tomato.

Cruzzfish I think if a plant traps and kills an insect in defence its classed as a paracarnivore , but if that's the case there must be many. Interesting thread to me
Last edited: Feb 7, 2016

The pertinent point is for want of a better term, "intent". Evolution is result oriented, and the point raised on the other forum about the timing of trichrome production is the most compelling evidence that the trichomes serve a different function.

Axelrod12 said:
I believe the occasional stuck insect is just a coincidental side effect. Cannabis is wind pollinated so it doesn't need to attract insects. Also given the vast geographical range in which cannabis grows and is capable of growing I think it would be hard to say for certain that it tends to grow in nutrient deficient areas. It has been established in almost all parts of the world fairly readily.
Click to expand...

I agree. Just as with sap, some insects accidnetally get stuck and die. Its only inevitable with sticky substances.

Also, it is generally regarded that the cannabis genus originated from one of the Himalayan valleys.
Many other landraces have been observed and recorded in Nepal, pakistan, afghanistan, morrocco, and lebanon.
Im not sure if the sativas came from the indica lines, or vice versa, but they also have record of landraces being found in Africa, Panama, Vietnam, Hawaii, and Thailand. I wouldnt really say any of those places devoid of nutrients.

Related question:
If the plants make these chemicals as a defensive mechanism to disorient and retard prey, wouldn't it seem not very helpful to ingest these chemicals in significant quantities?

rakovsky said:
Related question:
If the plants make these chemicals as a defensive mechanism to disorient and retard prey, wouldn't it seem not very helpful to ingest these chemicals in significant quantities?
Click to expand...

If human and insect physiology were the same you'd be right........and then there's alcohol, which can disorient and retard humans. But if you don't ingest a significant amount, why bother ingesting at all?
Last edited: Feb 7, 2016
You must log in or register to reply here.