I thought it would be useful to start a thread about growing Begonias from seed, and Begonia dregei, in particular, for a couple reasons. Begonia seeds are tiny, and I think a lot of people assume they are near impossible to grow successfully. Begonia dregei is a really fun Begonia, and one of the easier ones from seed, in my (limited) experience. I also have a few extra seeds (free/postage/trade/whatever), if anyone is interested.

Here' one of my favorite Begonia dregei pictures, illustrated how bizarre this caudex-forming species from South Africa can be: 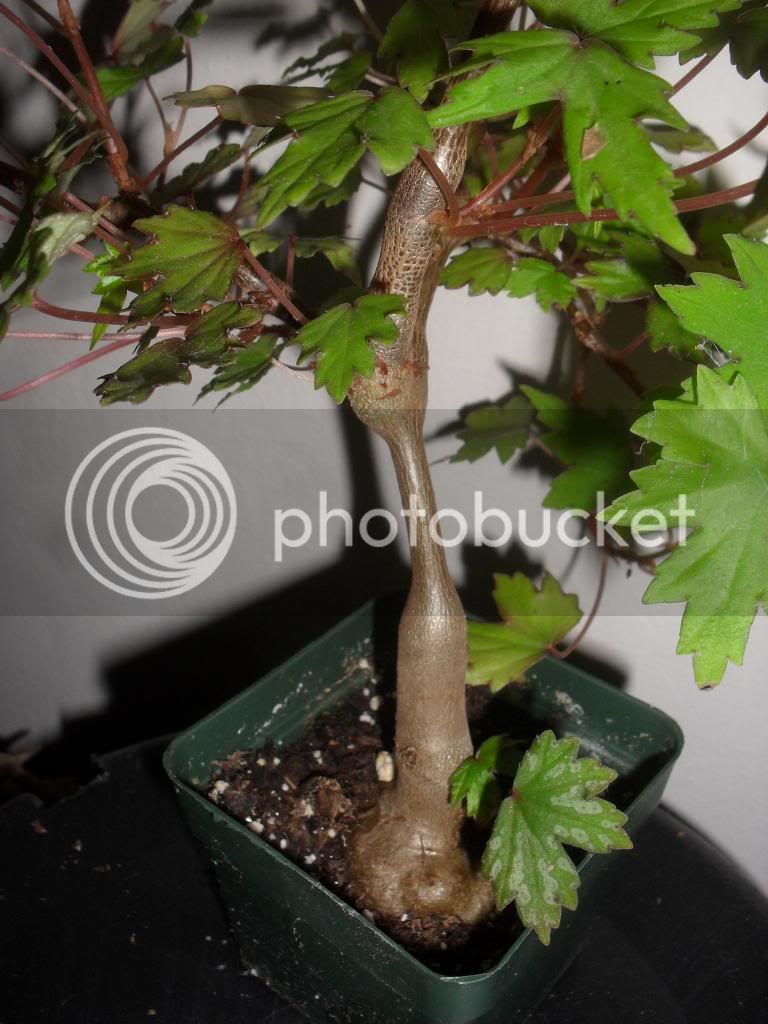 And here are four plants of mine. All are seed raised, except for the one 2nd from the right, which I received in a trade, and is likely a rooted cutting. It's the same plant as the one above, although the previous photo is older, before a couple rounds of shedding some of its growth. The plant goes semi-dormant for me, dropping some of it's branches, mostly in the Fall. 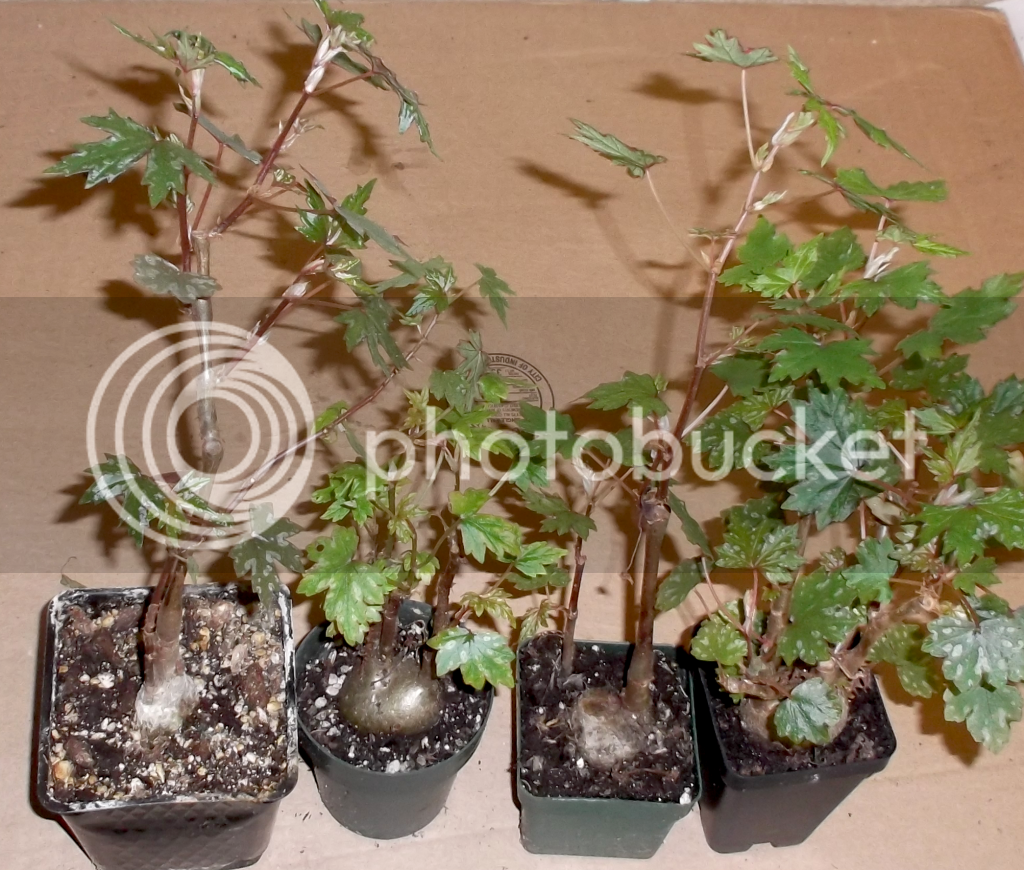 I thought it would be useful to show the progress of seedlings in (mostly) real time, so people could get an idea of how long the process takes. However I did start some seedlings a month ago (Jan. 17). They are tiny, and it will speed up the process by a month.

I just got some new seeds yesterday (from my mom's plant, also a seedling of my original). So I want to test those for viability anyway. So I'll show the steps I go through to sow the seeds.

I use a 50:50 mix of peaterlite, get it pretty moist, and microwave it for several minutes to kill some of the pathogens. I don't make a huge attempt to be sterile, and after cooling, I put it by hand into a small pot, in this case a 3 inch plastic pot. I usually use a fresh pot, but I'm out, so I sterilized it by soaking in a bleach solution. If the soil is not moist enough, now is the time to do it.

Sowing too many seeds can be a problem, and I usually shoot for 30-50, pouring just that many onto a small sheet of paper creased in the middle: 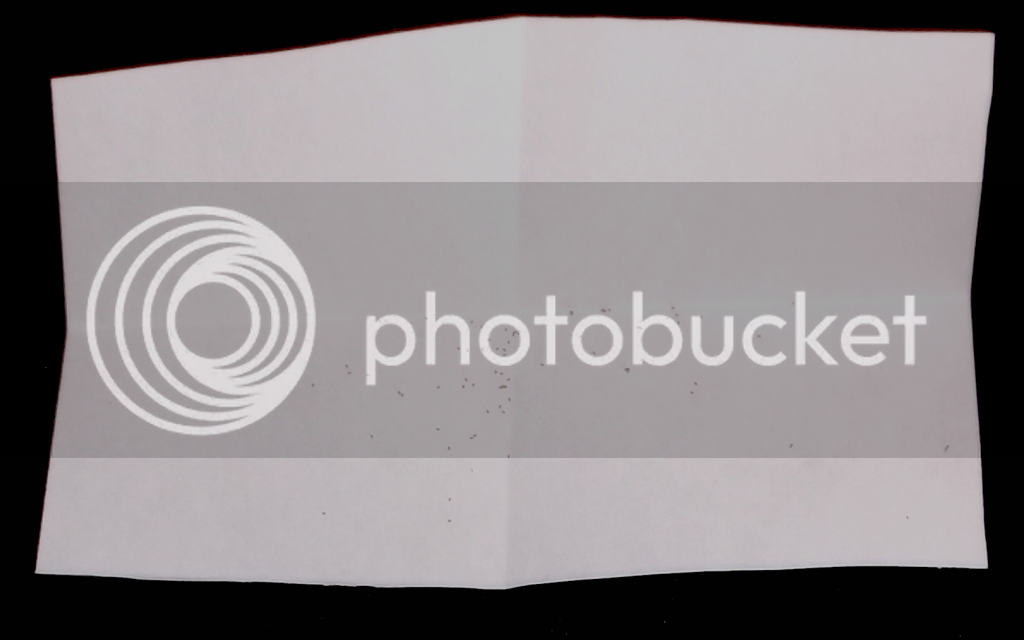 It's easy to tap the seeds into one of the creases in the center. Obviously, rather than losing valuable seed, these steps can be practiced on something disposable, such as sugar. 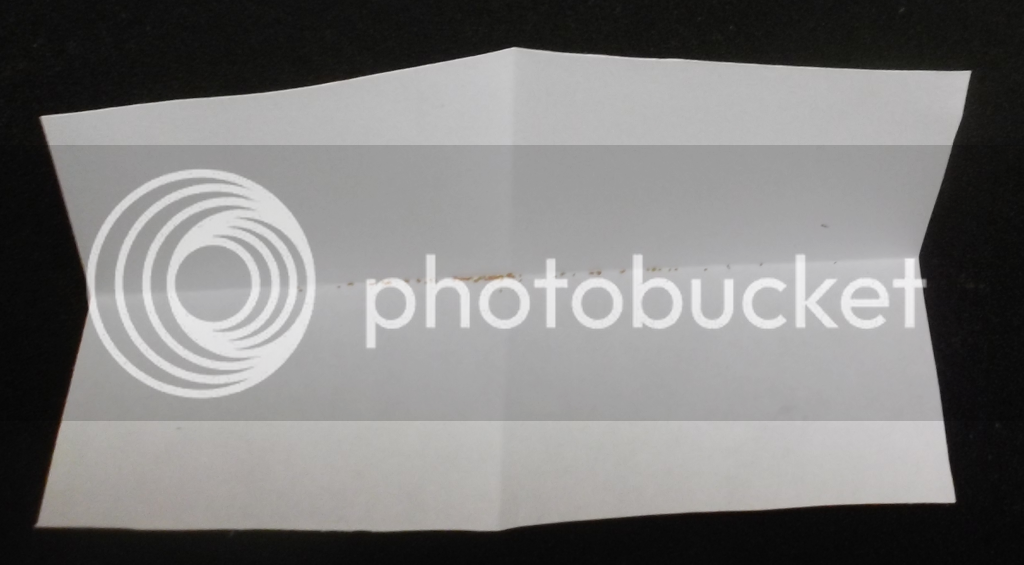 The folded piece of paper can then be held tilted over a pot, to serve as a chute for delivering the seeds. Gentle taps at the end can be made to make the seeds travel gradually down this chute, as the exit area is moved over the surface of the pot: 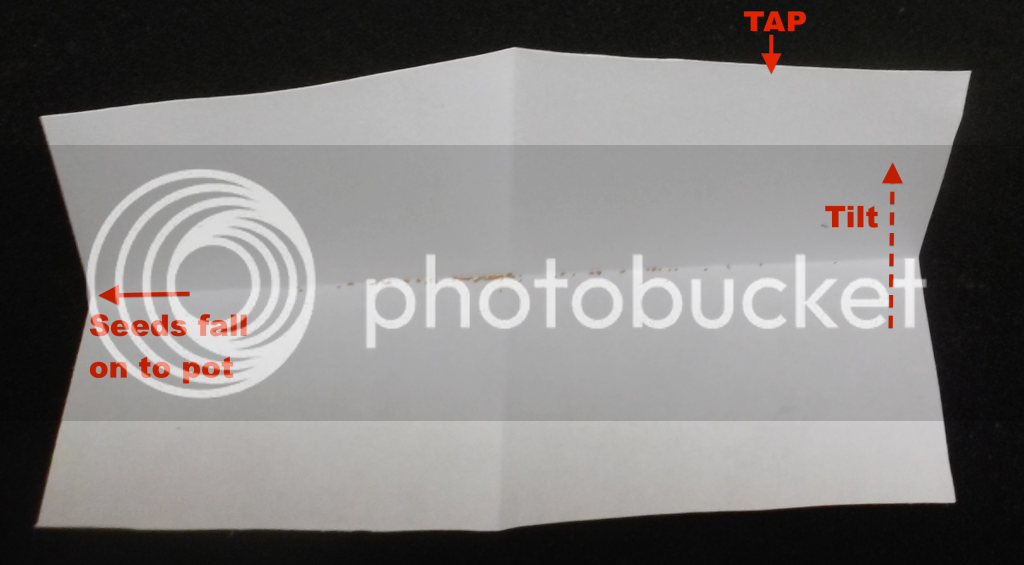 This next photo does a poor job of showing holding the paper chute over the pot. Unfortunately neither the crease nor the seeds on the paper are visible: 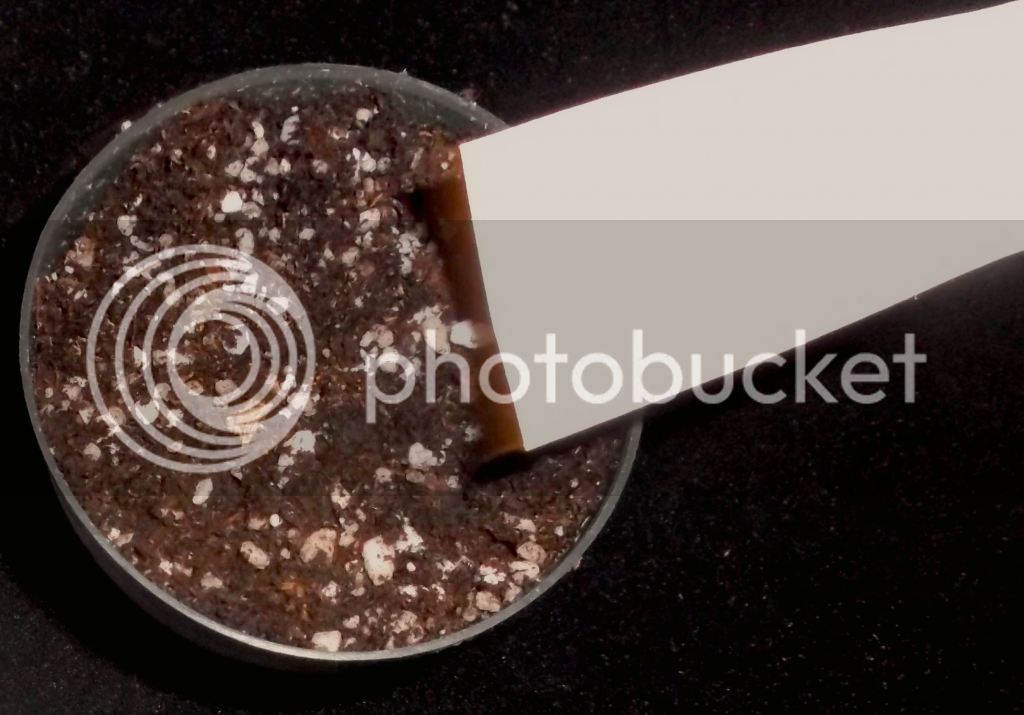 At that stage it's all done, and the pot can either be covered with plastic, put into a plastic bag, or what I prefer, an inverted 10 oz plastic cup can be used as a dome. That sort of cup fits perfectly on top of a 3 inch round pot, and it can all be sealed with tape. 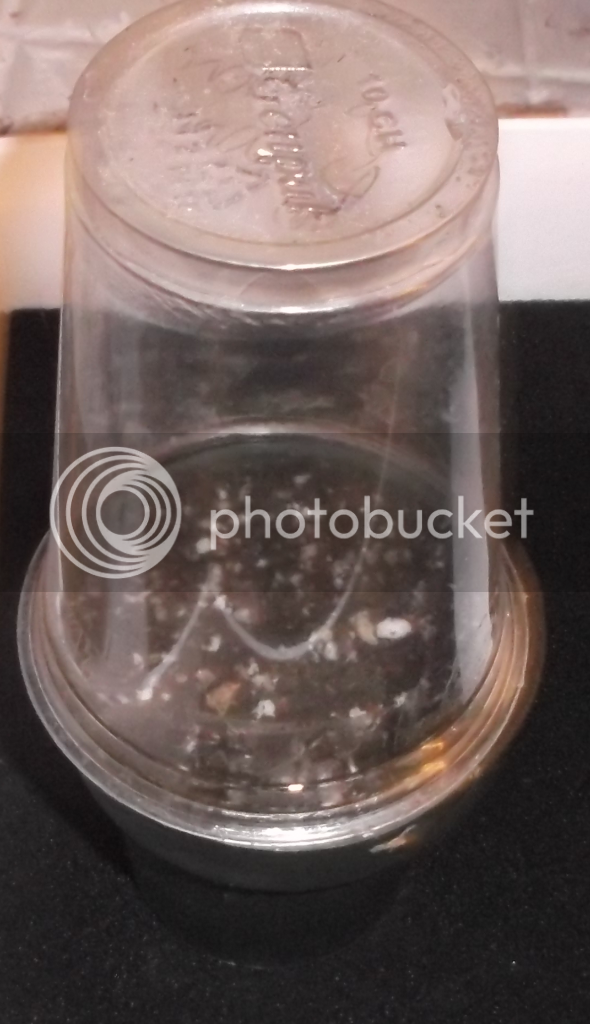 Then, under lights... 2 weeks later (I think the range for almost all Begonias is 2-4 weeks) tiny seedlings appear. These were started January 17th. I counted about 40-50 in there: 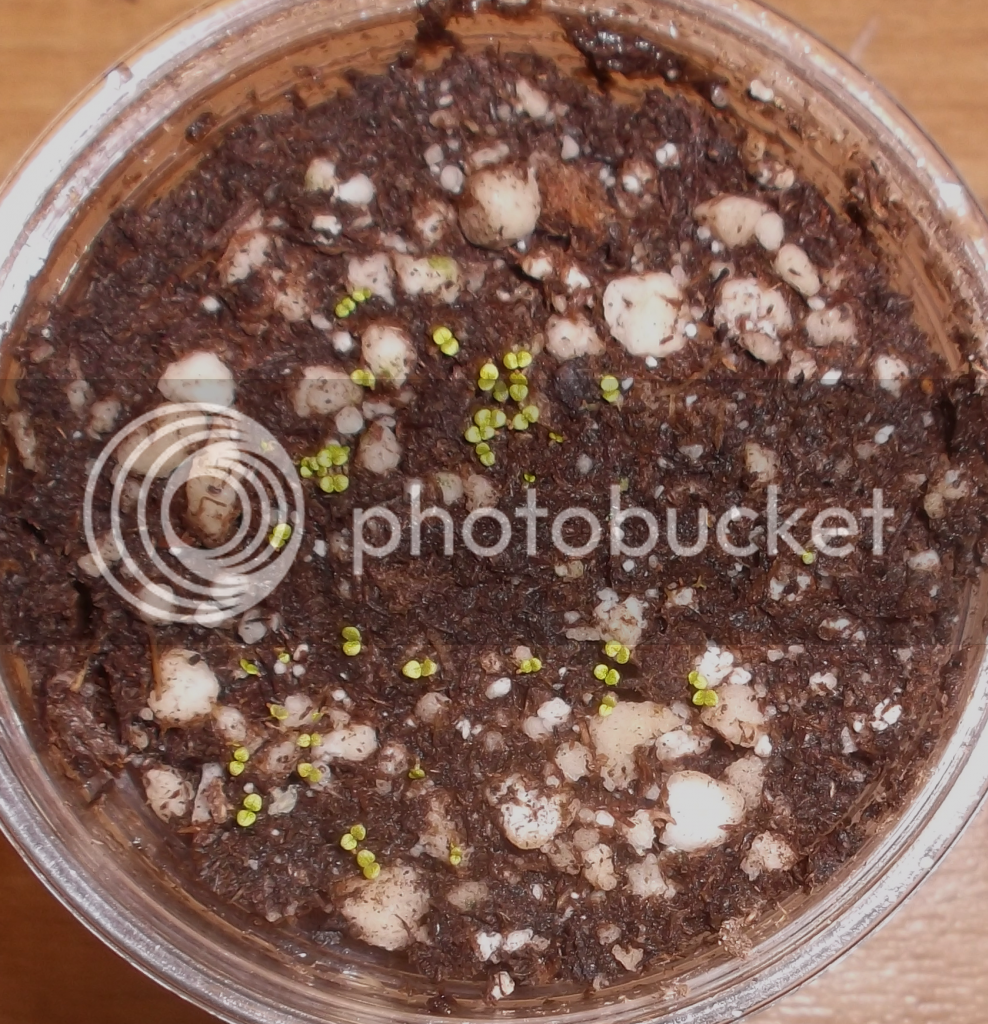 Given the size of the seeds, the are actually surprisingly large at this point. Soon they will start growing fast.
Last edited: Feb 13, 2015

Nice thread! Do they make flowers?

I was reading something about begonias that can handle sun. Any idea what species they are?

Usually the tuberous ones are cooler-growing and need a dry dormancy period when they lose their foliage. Most begonias prefer partial sun where we are.

Randy, thanks for all of these thoughtfully written threads. The information provided, as well as the generosity of the giveaways, brings a positive to the forums that has waned in recent years.
R

Dionae, they have small white flowers. Here's a photo of the original plant, I believe in August 2013

I think some "wax Begonias" (Begonia cucullata hybrids?) , which are commonly sold as summer annuals, can take pretty much full sun. I think Begonia boliviensis and Begonia venosa can take a lot of sun, but I suspect whether that's full sun might depend on the climate. I've seen Begoina foliosa, I think in full sun, in San Francisco, but that would be in a cool, foggy/cloudy climate. Actually, my mom grew it here in pretty much full sun and it's now happier in mostly shade.

theplantman, There's a nice description of some of the differences between the tuberous and the caudex forming Begonias on Brad Thompson's site. The caudex forming ones such as B. dregei are classified as "semi-tuberous" and lumped with the tuberous ones, but I'm pretty sure the grouping does not reflect relatedness. B. dregei does not necessarily lose its leaves/stems, and even then often only some of them. Another example of a Begonia that is in fact tuberous but does not necessarily go dormant is Begonia bogneri.

Randy, thanks for all of these thoughtfully written threads. The information provided, as well as the generosity of the giveaways, brings a positive to the forums that has waned in recent years.
Click to expand...

That looks very nice! Thank you for the info. I think they were called wax begonias.
You must log in or register to reply here.

A
For Sale Bioactive Substrate