Hey guys, I have 3 Nepenthes that I would like to trade out.

- Nepenthes hamata, fresh cutting from the shoot that is boxed out in the picture. Established growth point. I'm not entirely sure of the pedigree. I was told by the people at UC Davis that the mother plant was a gift to the conservatory from Ch'ien Lee. Looks fairly typical of the other clones out there, pitchers can turn dark purple under good light. Original was stolen from the conservatory in the recent years... hence why mine is a bit hacked up. Cutting will be taken at time of shipping.

- N. spathulata, rooted female cutting. Received way back in the early 2000s from another hobbyist. Supposedly from Exotica Plants, so it may look a little different from the BE clone out there.

All seem to be pretty easy growers. I grow them upstairs on the windowsill. I live in the inland east Bay Area and today was up into the 100s with 12% RH. These can take a bit of abuse for sure.

What I'm looking for:

Pic taken today of the mother spathulata, pitcher is about 7.5inches tall.

For some reason I never took a pic of my hamata at its prime... Here is an older pic (2012) of it with smallish pitchers under less ideal lighting.

Unfortunatly the ramispina i have is a baby and is recovering from being taken out of the bag to soon :\
But im sure someone will snatch these up asap!
Would luv a hamata but i don't seem to have much any one would like at the moment. Congrats to the trader who gets these! If i find something youd like I'll let u kno but the ones that are putting out basals aren't to uncommon i think... And I'm sure you'll get greater offers then i could. Goodluck

Alright replied to the people who had questions, for those with offers I'll reply to you guys middlish of next week. Once I review the other offers.

Anyone with N. ramispina to spare please please pm me!

I may have one in a few weeks i could trade u with..but by then im sure someone will have traded you one goodluck though

KATastrophe said:
I may have one in a few weeks i could trade u with..but by then im sure someone will have traded you one goodluck though
Click to expand...

Do you mean this one??
http://www.terraforums.com/forums/s...amispina-Genting-accumulation-help?highlight=
K

No my friend is sending me a seedling he has a bunch of because i asked him what i should do about mine, but it is doing much better now and i told him nevermind but he insisted i take it cause hes already got a few of them
I out mine back in the baggy and its pitchering like crazy. I think its all the rain we been getting knocking the humidity and that i may have rushed it out of the baggy a little early *shrugs* ill ease it out better next time 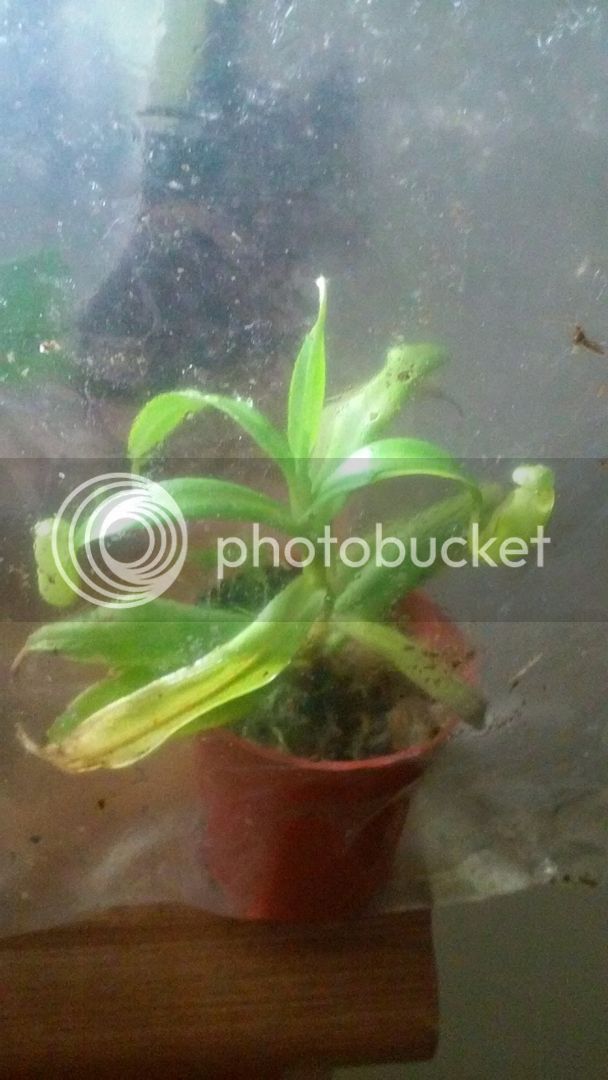 Sorry for crappy picture its in a bag that was misted

So when friends send you seedlings, the first thing you do is trade them away?!
K

No they are usually housed in the greenhouse for study and further exploration. But he suggested i should trade it or give it away or keep it as a back up. And i figured it would be nice to share it with someone who would like it and get something we don't have and would like to have or get something to give back to him for his generosity but like i said its most likely the trader will have gotton one before i even see the one my friend giving me.
Last edited by a moderator: Jul 4, 2015

I know this is real old, but are their still plants left? I never saw this thread...

ah no..., all gone sorry! looks like my links died too...
You must log in or register to reply here.