Stylidium debile pollination? how to get seeds

I did eventually get the plant to flower: 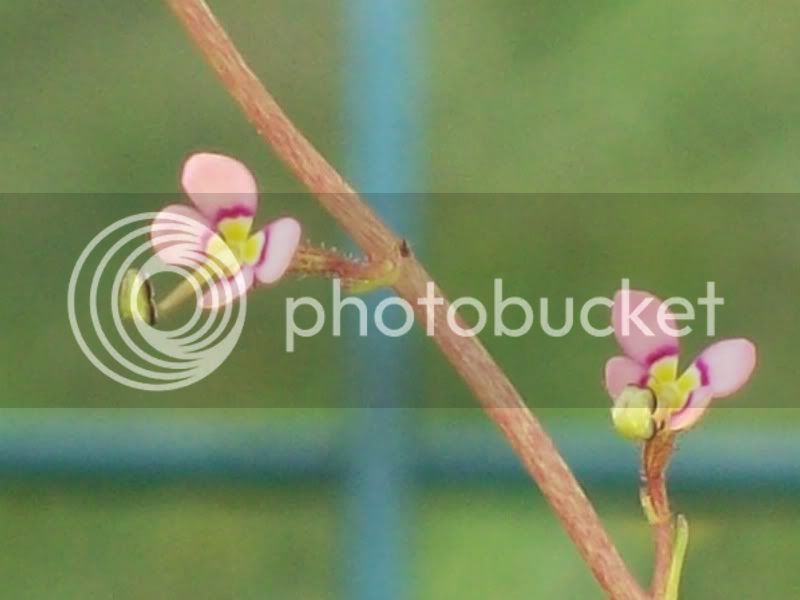 Sorry to butt in with this information on such an old post, but I was able to get viable seeds from Stylidium debile (at least seeds probably mixed with a little detritus) in this manner: I grew my S. debile outside during the summer in a sunny spot, where it flowered profusely, and I noticed that the flowers were frequently visited by those little "sweat bees" (it was entertaining watching them feed from the flowers and get constantly accosted by the columns). After all the flowers were spent, I sheared back all of the stalks and put them in an open Ziploc bag to dry further. After the stalks were completely dried, I massaged the stalks through the bag to release any seeds they possibly contained, disposed of the flower stalks, and kept the resulting powdery remains in the bottom of the bag. I tried surface sowing some of this powder (no smoke treatment given), and obtained S. debile seedlings in this manner (that's where my current batch of S. debile came from - the old colony, which provided the seeds, dried out and died a couple of years ago). I also noticed, while growing the old colony outdoors, that a seedling of S. debile popped up in an adjacent pot in a separate water tray. They'll definitely produce viable seeds without being crossed with an unrelated clone. I wanted to share this because Paul Riddell (of Texas Triffid Ranch) once told me (via email) that I should inform other triggerplant enthusiasts of this, because he was likewise under the assumption that S. debile would not produce viable seed without being outcrossed with a different genetic clone. In conclusion: Put 'em outside, let the sweat bees sex 'em up, save the chaff, then sow that ****nit.
You must log in or register to reply here.

Took some nice pics of my nepenthes Garden

Apr 7, 2019
ShoalCreek
S
A
Give Away FREE Veggie Seeds All Kinds!