Well, after several false starts and stupid mistakes, I got an N. tobaica several months ago, and it's been doing very well. In fact, it's been doing a bit *too* well. Quite a while ago, the growing point just spontaneously died, and as a result at least 4 new ones formed, and all have been going crazy. It's best to just show you all what I mean: 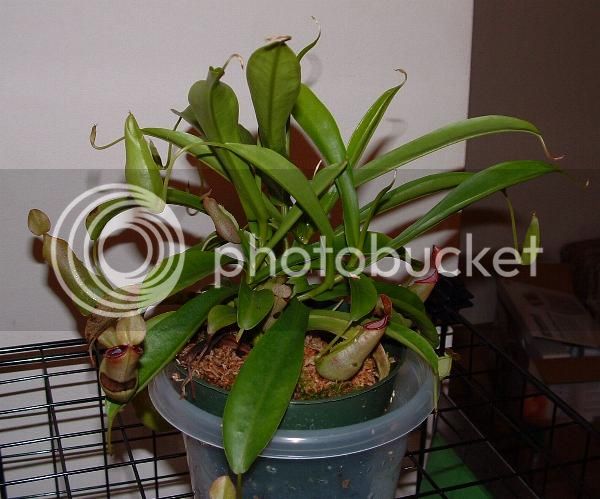 I've over-fed a few pitchers, but generally it's flourishing. The length of stem between the leaves has been increasing, which I gather means it's vining. Which brings me to my question:

Should I
a) cut it back, and try to root the cuttings or
b) leave it be and move it to a bigger tank with things for the vines to grip?

Any advice? In the case of the former, I've never done cuttings with Neps before, though I picked this species both for it's ease of cultivation and ease of propagation via cuttings.

My vote would be to take cuttings.

I think that your plant isn't big enough for cuttings, it's a lot easier when the branches are longer. And actually the plant isn't that big, it just has lots of side shoots...

If you wan't to cut some of them of, cut them with a very sharp knife. When it is a brach, cut right above the leaf that you don't wan't in the cutting ( and try to take at least 3 leaves for each cutting, just to be sure. ).
Then put your cutings in an open media or even pure water. For me rooting them in live Spaghnum moss works best...

I hope that I could help you.

I say leave it and let it become a monster.

If you do take cuttings, you can take the lowest leaf off of each cutting to provide a little more stem to stick in the soil (assuming, of course, that you have cuttings with more than one leaf.) I'm able to get away with making cuttings from dense plants like that, but I've found - at the suggestion of more experienced growers - that they root better if you have a longer bit of stem and make shallow cuts along the length of it before applying rooting hormone. Your plant isn't super big, but you could just take the growth tips (plus the top few leaves) off as it gets taller. That'll encourage a lot of side growth and formation of more basal offsets. I'm always reluctant to let my houseplants climb on things because plants are surprisingly good at latching on to things and entangling themselves. I haven't let any of my Neps get that big yet, but my more mature Neps get themselves into enough trouble just by growing into hot lights and other hazards.
~Joe
You must log in or register to reply here.

Cause of black in Nepenthes stem?