I wanted to wait before I said anything concrete, but as I ended up trading away most of my test subjects, it looks like things are on hold for awhile until the next batch of seedlings are large enough, and anyone who knows me, knows that I can be impatient with certain things...

This began with a simple thought, and cascaded into something much larger, complicated, and completely unnecessary, though with great potential, if it were anyone but myself doing it.

"Is there anything better than bloodworms / mealworms that I could manually feed my Sundews / VFT's? And if not...could I make something?"

The original idea was to simply use additives, such as liquid fertilizer, when rehydrating ground insects, but that seemed to defeat the purpose. I was still using fish-food, which is what I'm trying to get away from.

Enter Gelatin; a collagen (protein) based compound that is high in organic nitrogen, amino-acids, and is readily susceptible to proteases. Except, instead of modifying it with vodka...I'm going to modify it with fertilizing additives.

Since I don't have access to lab equipment, nor educated enough to perform pyrolysis and gain anything useful from it other than, "Ooh! Pretty fire!", the results will likely be limited to the two most simplistic results; Leaf-Response, recorded as the approximate amount of time it takes for a leaf to react and curl around it's food, and Diameter; as in, how large the plants are at each measuring.

Two different controls will be used; Plants that are not fed at all (Redundant, since feeding them practically -anything- is helpful), and plants fed only ground and rehydrated mealworms which, along with bloodworms, are the "industry standard" for the manual feeding of plants.

Once I'm situated with enough plants to begin testing (now hoping to use 30-40 D. capensis seedlings), I plan on using between 6-10 different formulations of gelatin-based food and recording the results weekly.

Of course, this all hinges on whether or not gelatin is actually digestible by a sundew, which is about to be tested in a proof of theory over the next couple days, by a random adult D. capensis or two, just to make sure that the leaves respond at all, and that an appreciable loss of mass is evident, which will be compared to a similarly-sized piece left in the open air to dehydrate.

What I hope to achieve is a (possibly marketable) food that out-performs the application of "fish-food", taking into account the nutrients that -plants- need, rather than fish.

If nothing else, in the next couple days, you'll have a pretty picture of a Maxsea jello-shot. (Being used to test whether the leaves respond, since I had it on hand.)

(Edit) Also...I might be the first person to ever try this. I can't for the life of me find any pre-existing information on such a technique...so...hooray for making history!?

This could be interesting. Looking forward to seeing the progress/results.

That's quite an interesting idea. I would think you'd need a pretty high concentration of gelatin to keep the food reasonably solid at room temperature and I'm not sure if it would hold up in a terrarium environment. Only one way to find out!

nimbulan said:
That's quite an interesting idea. I would think you'd need a pretty high concentration of gelatin to keep the food reasonably solid at room temperature and I'm not sure if it would hold up in a terrarium environment. Only one way to find out!
Click to expand...

That's actually a really valid point, and one that I didn't even consider. After a little searching, (and the simpler method of letting some small pieces sit out on a piece of wax paper), it looks like I'm good at temps below 90F. Even at excessive temperatures, it may still do it's intended job, especially with flat-leaved 'dews like spatulata, aliciae, etc.

The concentration I used was on the high-side, but still within the limits of the manufacturer's recommendations, equal to 1 packet (2 1/2 teaspoons) per 1 cup of water.

Another consideration is the high liklihood of bacteria growing on the gelatin. Not sure if there's a way to combat this, or if new batches will need to be made weekly / bi-weekly. The addition of ferts may make that worse. 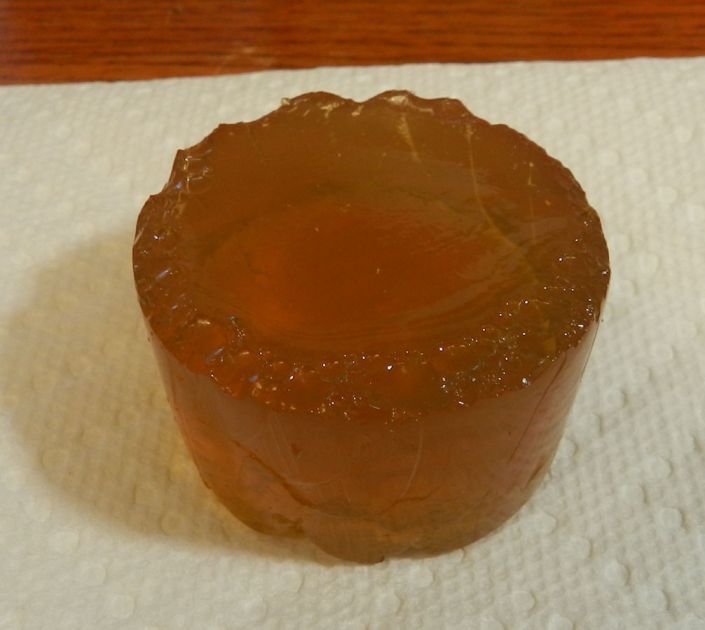 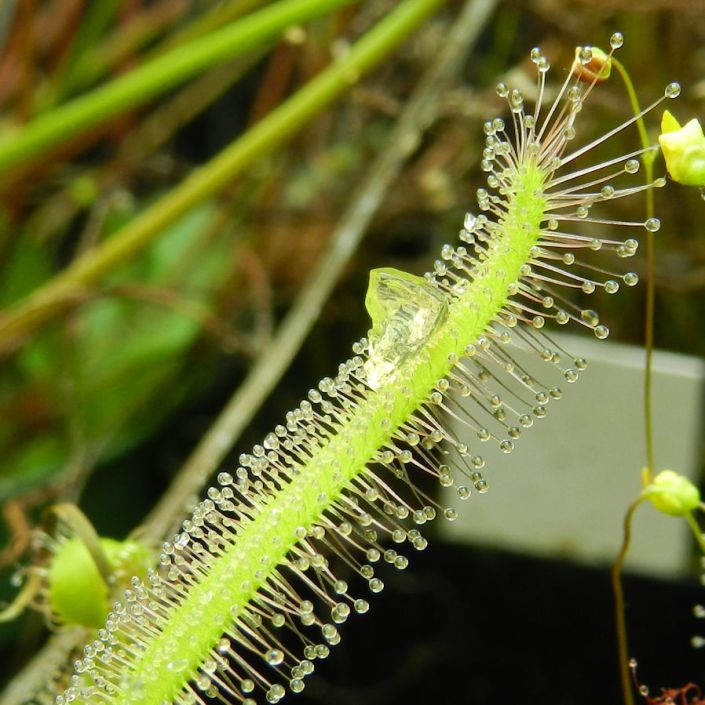 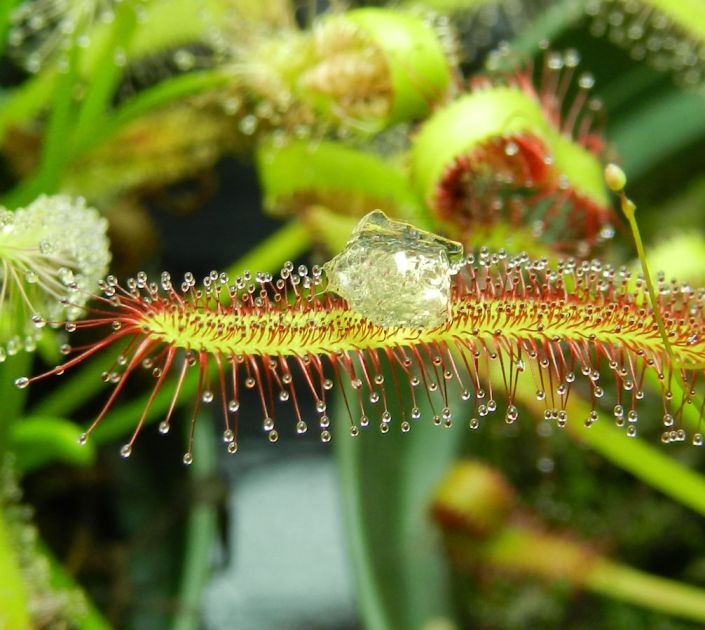 Among the tests for "carnivory" is using gelatin or cooked egg whites (albumen) to see if it is absorbed/digested by the plant leaves. These go back to Charles Darwin's experiments in the 19th century

Gelatine.—I used pure gelatine in thin sheets given me by Prof. Hoffmann. For comparison, squares of the same size as those placed on the leaves were left close by on wet moss. These soon swelled, but retained their angles for three days; after five days they formed rounded, softened masses, but even on the eighth day a trace of gelatine could still be detected. Other squares were immersed in water, and these, though much swollen, retained their angles for six days. Squares of 1/10 of an inch (2.54 mm.), just moistened with water, were placed on two leaves; and after two or three days nothing was left on them but some acid viscid fluid, which in this and other cases never showed any tendency to regelatinise; so that the secretion must act on the gelatine differently to what water does, and apparently in the same manner as gastric juice.* Four squares of the same size as before were then soaked for three days in water, and placed on large leaves; the gelatine was liquefied and rendered acid in two days, but did not excite much inflection. The leaves began to re-expand after four or five days, much viscid fluid being left on their discs, as if but little had been absorbed. One of these leaves, as soon as it re-expanded, caught a small fly, and after 24 hrs. was closely inflected, showing how much more potent than gelatine is the animal matter absorbed from an insect. Some larger pieces of gelatine, soaked for five days in water, were next placed on three leaves, but these did not become much inflected until the third day; nor was the gelatine completely liquefied until the fourth day. On this day one leaf began to re-expand; the second on the fifth; and third on the sixth. These several facts prove that gelatine is far from acting energetically on Drosera.

Thanks NaN for providing the link. So much for making history, I guess.

Speaking of inflection, though. I would say the response to Maxsea-infused gelatin was resoundingly positive: 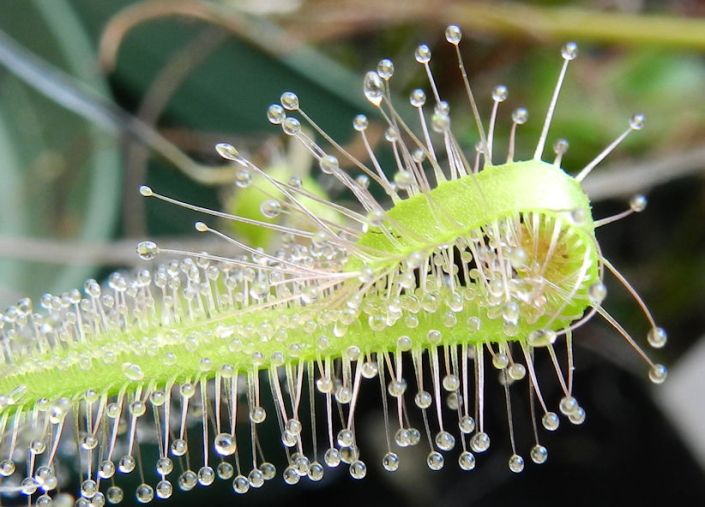 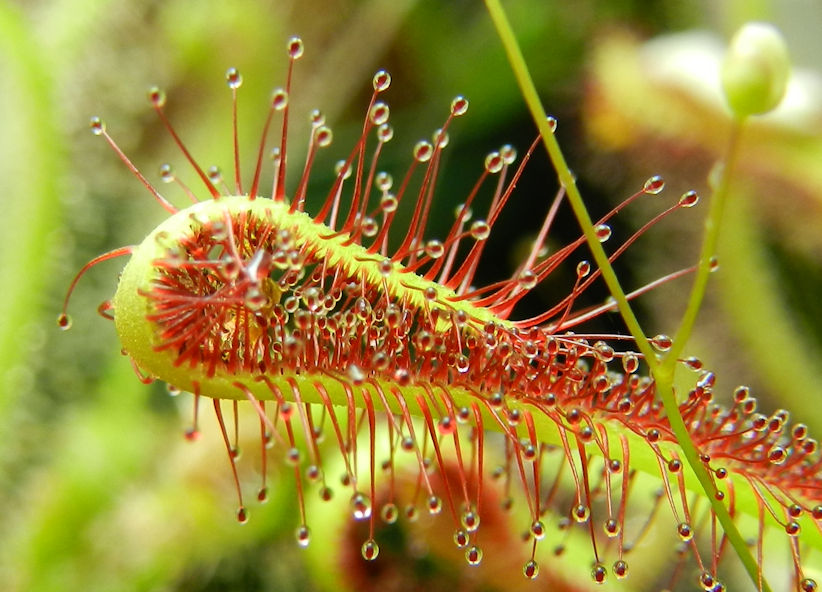 Very encouraging. The variations on what can be used are many, with gelatin as the base. Really excited to move on to other formulations.
H

Good work m8 this is ingenious

Sent from my SM-T210 using Tapatalk
You must log in or register to reply here.

Have you installed the TerraForums app yet?

Have you seen the chat box?