What is wrong with my sarracenia

I have had this Sarracenia purpurea ssp. Venosa for a while (close to three and a half years), but it is my only temperate plant and I'm still a complete noob when it comes to sarracenia care. Now in the first two years I had it, it followed a 'typical' growing season, ie. grew from March to November, slept, woke up in March, rinse, repeat. But just this last year, it flowered twice for me, once in the spring before growing new leaves (as expected), then again in the fall, right as the old leaves were dying back. The spring flower only had three petals and was small and deformed, but the fall flower was large, perfectly formed and fragrant. Now, my sarracenia is still apparently dormant despite the fact that it would have normally started growing right around now. The plant itself is still alive since the rhizome is still green, and I can see new pitchers poking above the ground, but should I be concerned? Image of it is from September/October-ish. The flower is still green and starting to dry out. 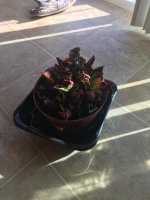