Easy to see how this plant would rapidly become a noxious weed if released into a compatible alien environment like Florida or tropical environment. While it would have been better to use a larger tank from the start, considering the speed of growth, I would not worry overly much about setting it back to any critical degree by replanting now.

Such rapid growth! After so few days the plant seems to be approaching something like maturity. I could see where this species could become invasive without the natural controls of its native environment. It would make a cool specimen for a home-made pond, maybe even providing good cover for some fish species.

Update: The Bicornis nut has been moved and transplanted to a 40 gallon tank.
After fighting a 3 day battle with Sand, Soil, and waterborne debris, the tank has finally cleared up enough to take pictures.
Unfortunately, Pictures from this point on will probably not be as clear as the ones before, as the sand has added a nice mud-Hue
to the water quality that shows no signs of settling, even with a filter running.
(Please excuse the mess as the tank is still a work in progress.) 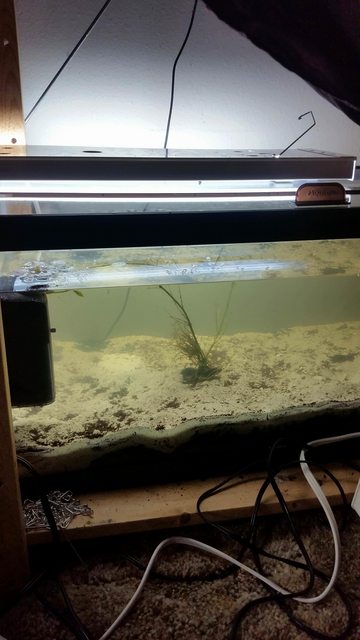 Note: The browning Shoots / roots are now seeming to "wood" over, and produce even MORE roots, with no signs of stopping.
This plant is a root machine. It also now feels firmly anchored to the bottom of the makeshift swamp pond. 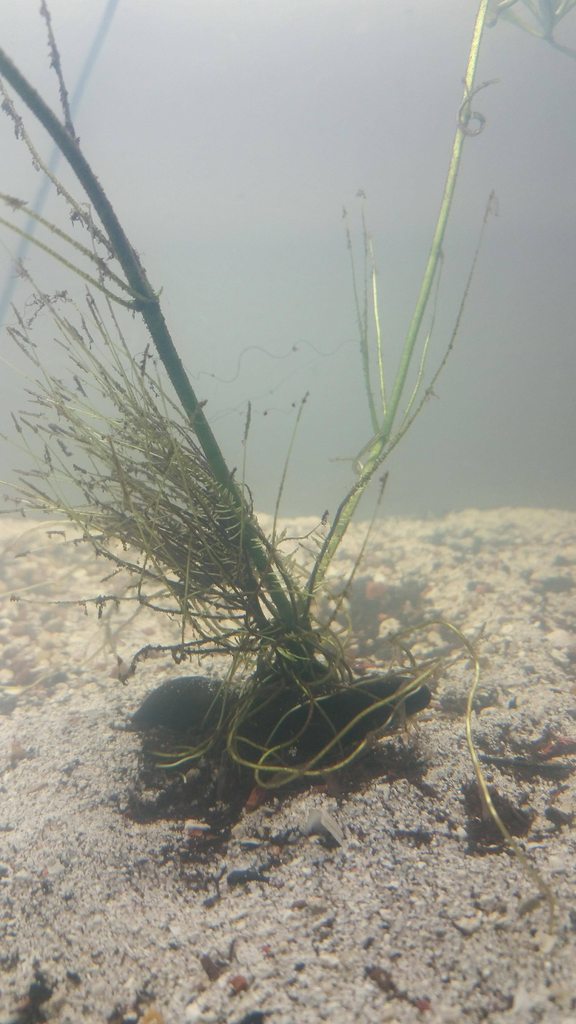 The floating Primary rosette has doubled in size since moving tanks. Air nodes have not yet formed on the leaves, as this plant
is still considered juvenile. 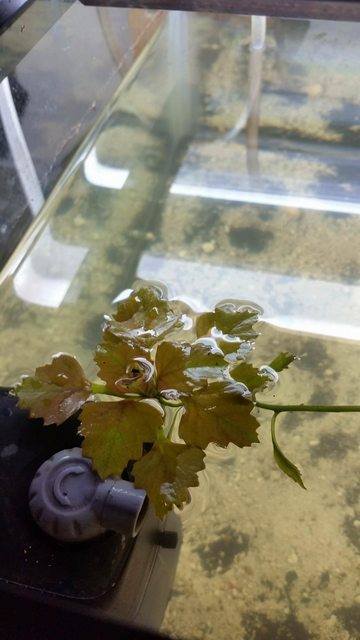 Day 16 - New roots are spreading like crazy. every root grows 200 more. these small pins were not here 3 days ago. 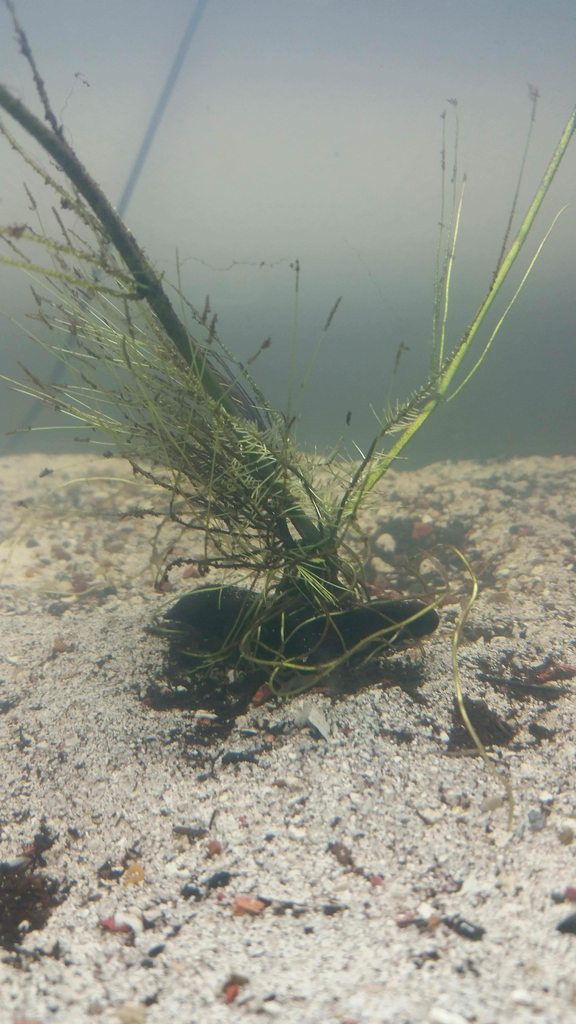 The stem leading to the rosette. The Bi-lateral spikes along this stem will also soon turn into mechanisms of mass root-ation. I swear they were smaller yesterday. 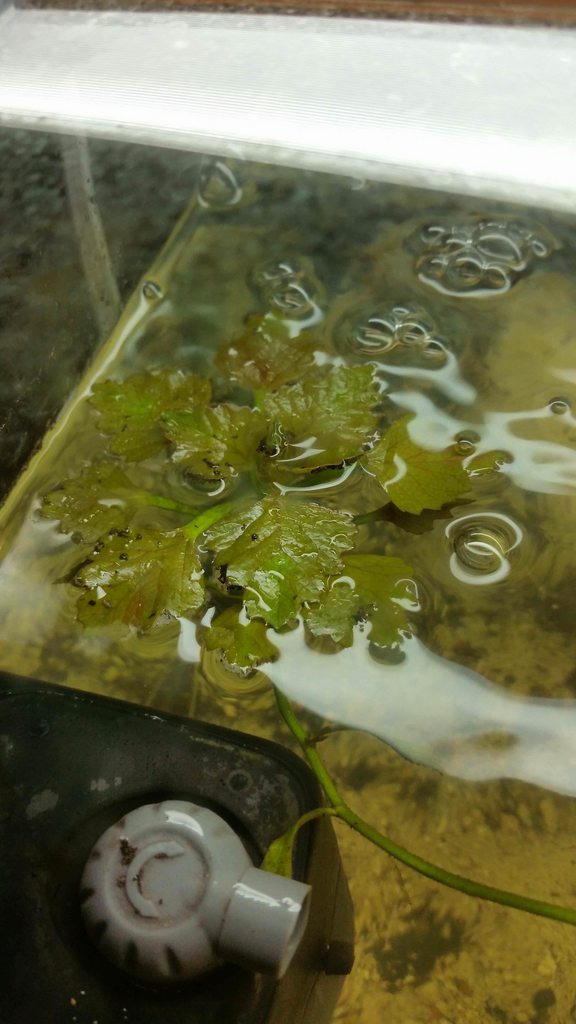 Also observed is that this plant has begun ballooning. 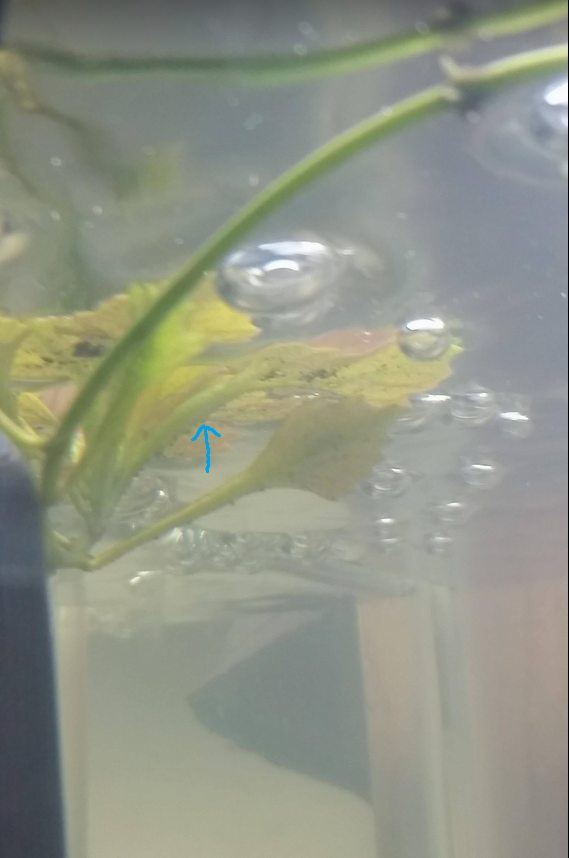 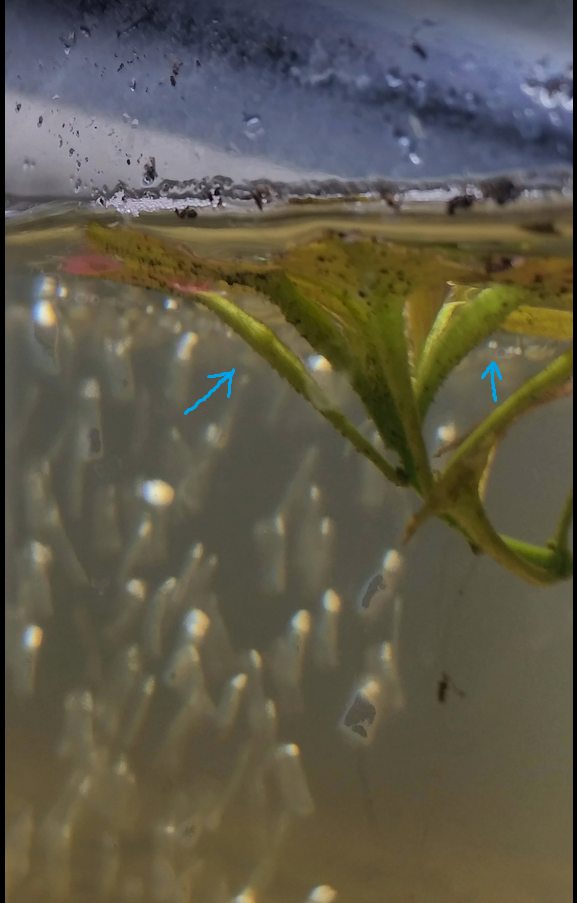 Also Of interest while poking through the internet, I found these. 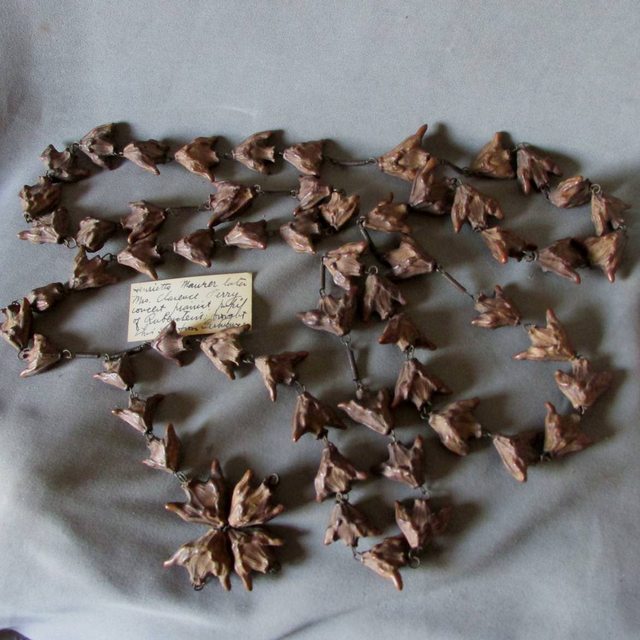 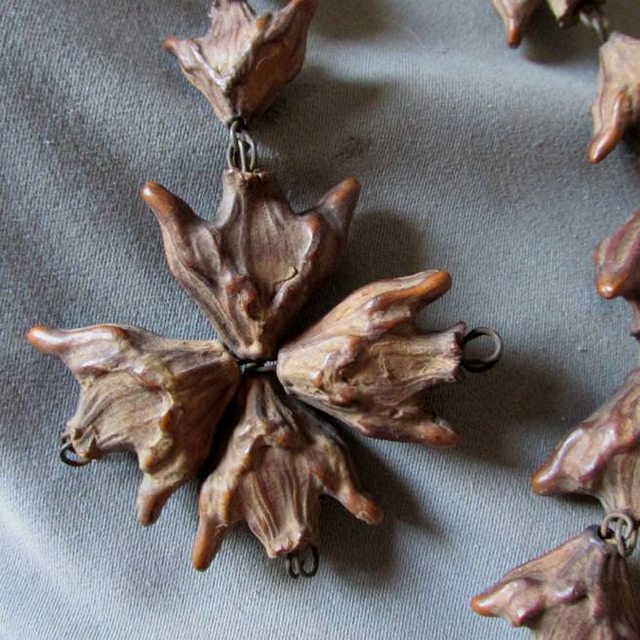 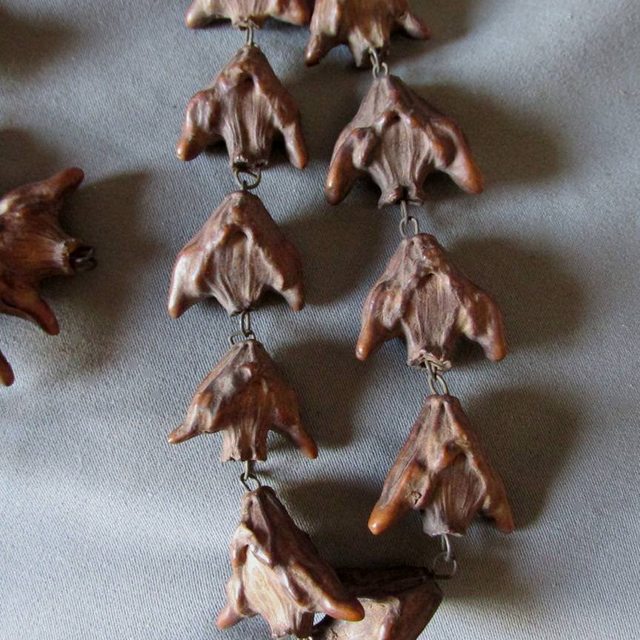 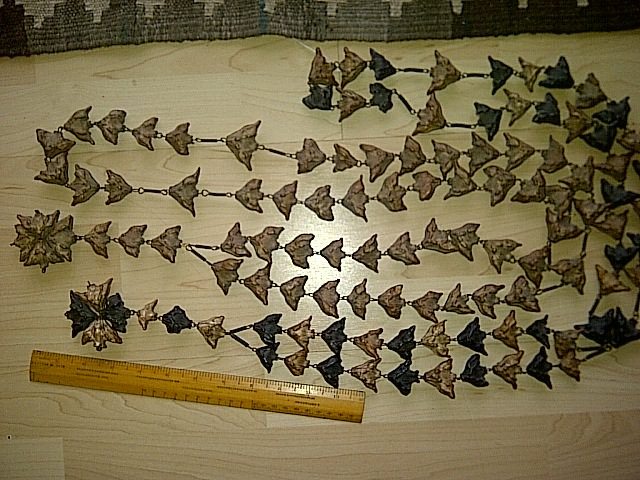 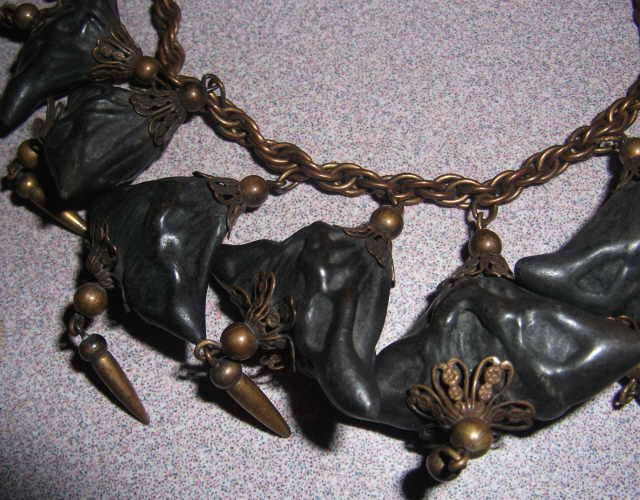 These are Trapa Bicornis Rosaries, Dated from 1870. Note how the seeds have the same face/structure,
however they are almost completely missing the horns. Could this be evolution of the species evident in roughly 147 years?

Also noted from the paper in the first photograph, with additional information - "Henriette Maurer later Mrs. Clarence Perry, Concert Pianist, pupil of Rubenstein: brought this set from Germany last of 1870s". Mrs Perry was from Boston and studied in Russia under the elder Rubenstein, she passed away in 1889, she was in her thirties, according to a notice in the Musical Courier. The plants are cultivated in the Lakes of Majena and Varesa in Italy, especially in the Bay of Angera, Lake Majena. With the seeds chaplets of beads are made in Rome, Varesa, and other European cities. Necklaces made of the nuts are considered very sacred in Benares, a holy city in India where Siddartha Gautama, the Supreme Buddha, gave his first sermon. The Rosary is large and measures 47" long and the Maltese Cross is 3" square. It is in very good overall condition."
Last edited: Nov 24, 2017
S

Amazing growth in this time period! I guess this is how these plants take over waterways so quickly.
My guess would be that the rosaries were either selected from seeds that were less pointed (for convenience's sake), that they are not actually bicornis, or that some populations are less pointed than others. I don't think 150 years is enough time for that kind of change.
A

Again, love the updates!
Thanks for posting about this amazing plant! 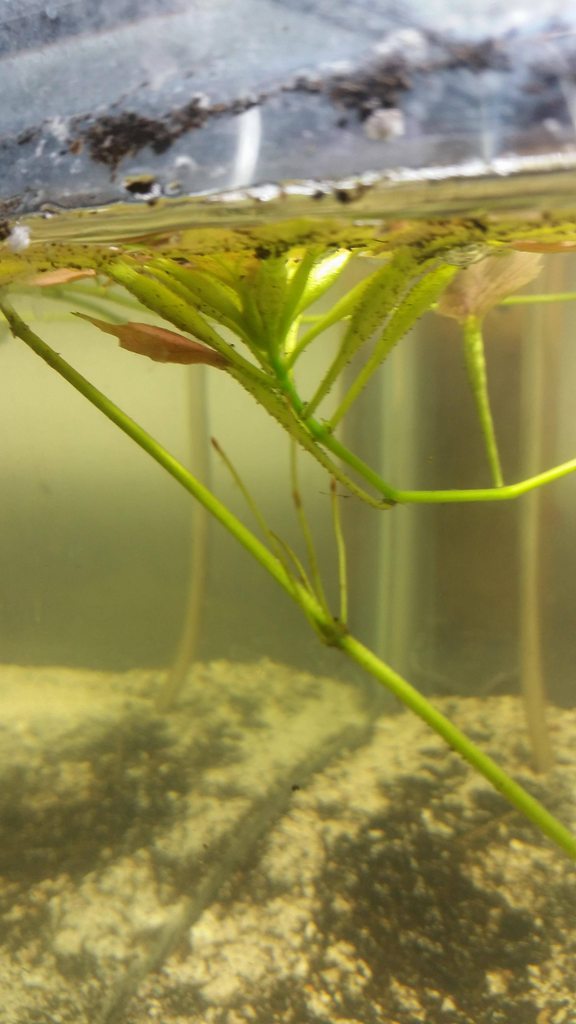 The roots have now turned into feathery aquatic masses, the seed is almost now completely obscured.
Growth is not progressing nearly as fast as the first 2 weeks, however stems continue to grow. longer and longer, despite the
large tank. 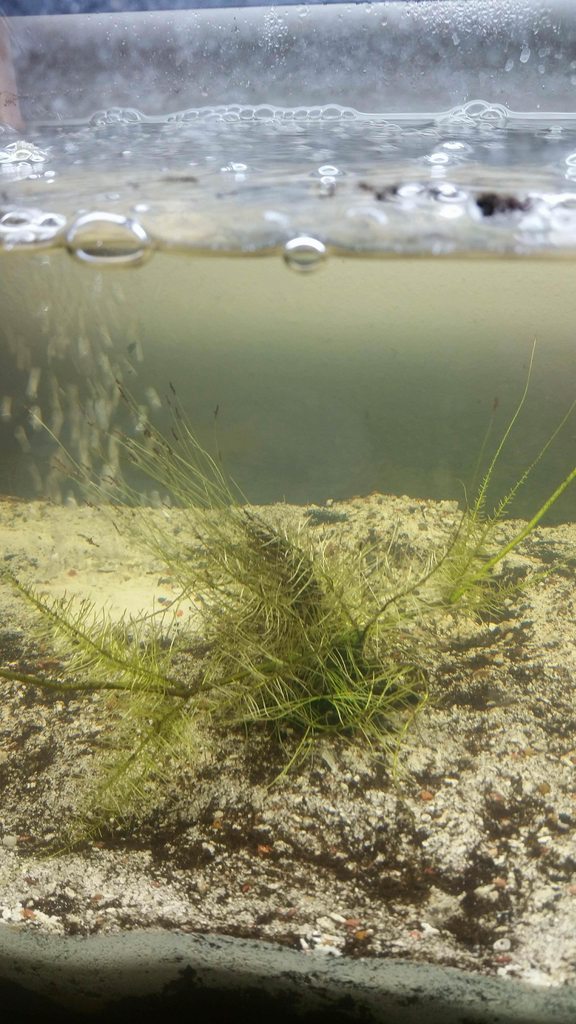 Any updates? I figure with this kind of growth something could have happened in a month

schmiggle said:
Any updates? I figure with this kind of growth something could have happened in a month
Click to expand...

Right now, there is nothing really notable.
The tank is undergoing some sort of algea bloom, and the rosettes are beginning to get some sort of disease.
the leaves are developing black spots and dropping off.

How are the plants looking?
L

This is exciting!
You must log in or register to reply here.