I've often seen scorpions here in my yard, the bark scorpion, Centruroides exilicauda, said to be the most toxic scorpion in the USA. The most common scorpion in Arizona, the stripe-tailed scorpion, Vaejovis spinigeris, we see these constantly, they only get 3 inches long, and, my favorite, rarely seen, but unmistakable, the giant hairy scorpion, Hadrurus arizonensis, also said to be the largest scorpion in North America - all the ones I've seen were a large 6 inches long, fortunately they are also one of the least dangerous and easily kept scorpions.

My current icon is a photo of the one I am keeping presently. And here is a better image:

Heres a photo of 2 scorps I found in CA. Uroctonus mordax, Northwest forest scorpion. Pure luck, as I had been looking for these for a long time. Then one day we happened to be a little ways from home in the mountains for a few hour picnic type trip these were hidden under the bark on a tree stump. 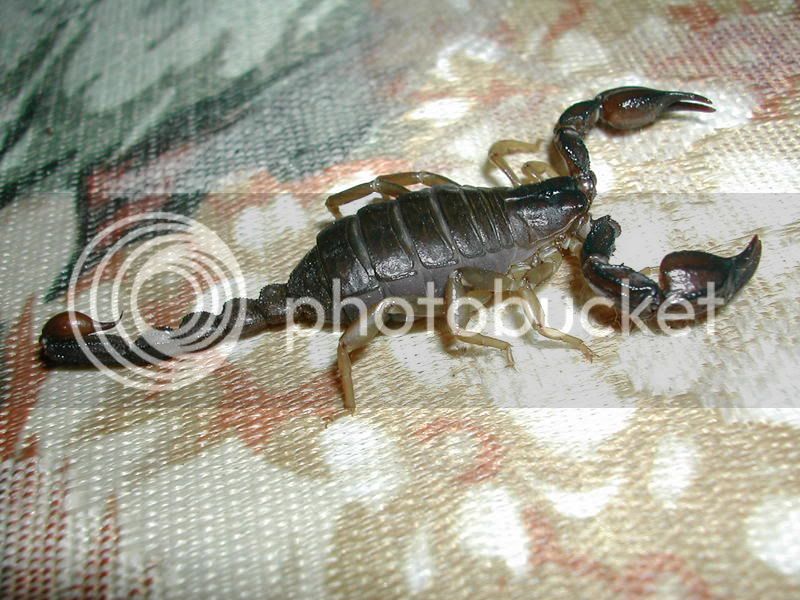 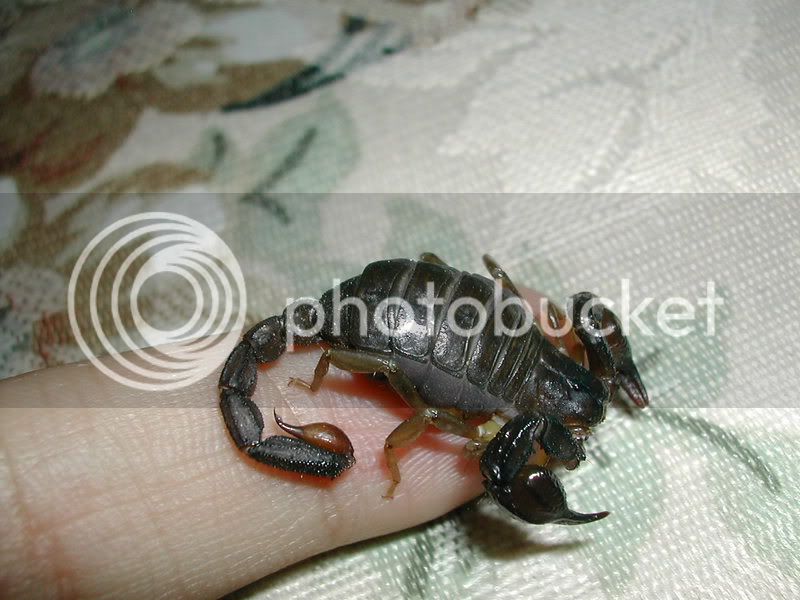 Ouch!(don't leave 2 scorps unattended in a little container, even relatively peaceful ones)

does anybody have Vinnegaroons?(whip scorpions) i like them alot...
Alex

i would say the top pics are pregnant female(s)
N

Possibly. That would be a pleasant surprise

I think they are both females.

Thanks Joseph! Just curious, but how common are scorps in Tucson? You have access to some really cool ones there(think the one you posted is the biggest in NA) I bet if I lived where you lived I'd be keeping quite a few. Think vinegaroons occur round you also.

Yes, except in winter, it is usually quite easy to find them under rocks and boards in the daytime. We also have the most dangerous species in North America (though they say there hasn't been a fatality in the U.S. for 40 years), the bark scorpion, Centruroides exilicauda, but it is not nearly as common as the stripe-tailed, Vaejovis spinigeris.

Estimates vary, but they say we have 20-60 species of scorpion, here in our area. Myself, I am only able to identify these three. And I have only seen a few specimens of the "Giant Hairy Scorpion" for the first time, this year. But I've never gone out just to look for them. They just show up quite frequently, so I just keep my eyes open whenever I'm moving anything that's been lying on the ground.

I've only just now decided to keep one of the "Giant Hairy Scorpions" for a while, to observe it. They are fascinating creatures.

most of the lil scorpion species such as the Vaejovis are a pain to tell apart. very cool critters, been thinking of tracking down a Hadrurus for awhile.

That Uroctonus is so cute!

hey rattler, i used to be HEAVILY into collecting inverts. i still have a few things. what are you looking for?? i can get you just about anything u want. you know me as josh_r on dendroboard. i got out of the whole invert thing for frogs..lol. i live in arizona and i know 40 or so species of native tarantula and scorpion. i have access to nearly any available exotic species. let me know.

Wow 40 or so species! Here in CA we have what they call the eutylenum complex that lives around me(got a mini taxonomy lesson trying to ID one I found).

Are you able to find vinegaroons? Now those are weird.
N

Bringing up this thread from the dead.

I caught this girl about half an hour from where I live. They are near a business friend of my fathers property, with burrows dug into the sides of the road. They are pretty common around here but of course are getting eaten up by urban sprawl. 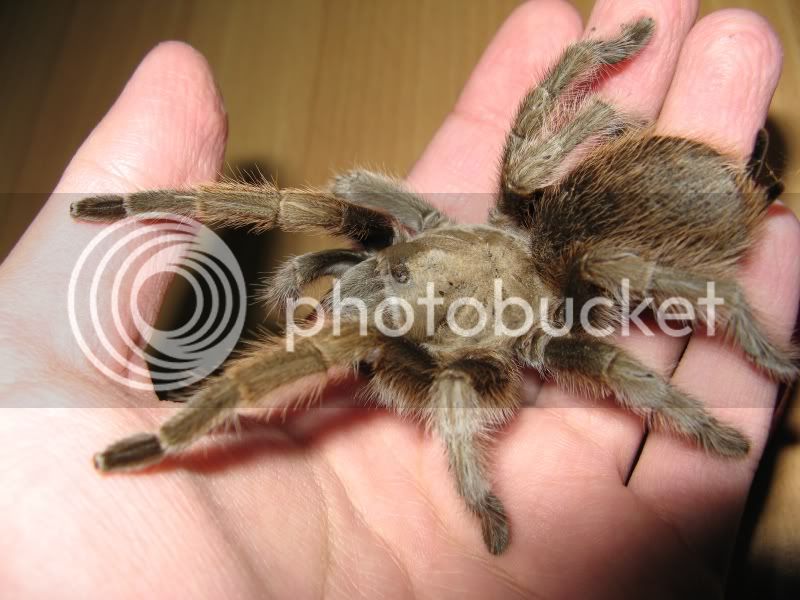 I cant be certain but I'm sure its not a rosie. Preatty though want me to get an ID on it?

Its an Aphonopelma. I doubt I will ever be able to get a certain ID as taxonomy is a mess. I think it would be properly referred to as Aphonopelma eutylenum, but this is being considered for revision. Great little gal. Can't let the more known A. chalcodes, hentzi etc. take all the credit.

Really pretty, How is their temper?
N

She's real calm and gentle though she's the only large tarantula I've ever held...hehe, so I wouldn't know. I've only seen her bite once and that was when I was trying to get her out of the starbucks frappucino jar I kept her in on the trip home by tickling her belly with a piece of cardboard. She does kick hairs every once if disturbed too much but getting her onto my hand for this photo was not hard at all.

I assume you know how to handle them and have raised them?

I'm in the process of raising a few, and as far as handling I've read a bit and have "common bug sense".

I have yet to measure her, but most pet store roseas are about the same size as she.

Thats cool, OK so i know a little bit about T's so if you have any questions i would say ask, but you seem to know what you are doing, good luck!
You must log in or register to reply here.