I just bought an ooth from Armstrong's garden center for $8.99. Its very small and weighs nothing. Im not sure if I can trust store bought ooths are fertile. Any knows if its already hatched?

the black thing is just a piece of a twig, not a hole. 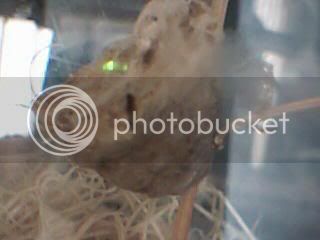 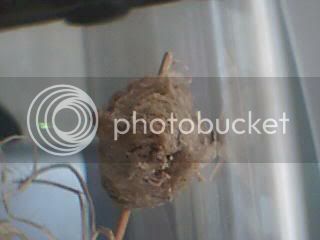 It does not appear to be hatched yet. There will be an open vent in the ooth for the nymphs to escape after they hatch. It took almost 8 weeks for my Giant Asian ooth to hatch. I had nearly given up, but then it hatched out.

ok. thanks i didnt wanna spend $8.99 for nothing

Can you anybody post a picture of a hatched ooth?

hahah sorry i put the ooth upside down.

I don't have a picture, but a vent is a slit or crack in the ooth.

Upside down ooth? You must be Sparky.

There is a picture somewhere on mantidforum.

what? LOL yes i am sparky. When i turned it right side up it looks even worse...theres a hole looking thing at the bottom.

If I hold a flashlight underneith it can I still tell if there are mantids in it or not?

It's been one of dem days

Mantids are cool! My daughter's (Black Fox) ooth hatched out yesterday and there were mantids all over the terrarium. She kept six and I kept one. The rest she released in the flower beds and trees around the yard. I'll see if I can find the ooth and post a pic of it later. Last I saw it still had the shed nymph skins hanging from it.


Peanut said:
If I hold a flashlight underneith it can I still tell if there are mantids in it or not?
Click to expand...

I don't think you'll see more than dark shadowy sillouetts inside the ooth if you can see anything at all.
Last edited: Jul 4, 2007

Oh neat I see a little bit of a dark sillouettes, but its hard to tell. Im planning to keep six too and maybe give a few to my family and neighbors.

well i opened it as a last resort... its brown and empty and I see some of the dead juicy nymphs that didnt make it.

If it's juicy inside, then it means that it's viable and that the nymphs are still undergoing development. How did you cut it? Please don’t say that you cut it in half… it’s difficult to tell from the picture. If you just cut off a slice from the side, then you won’t have major problems, just place it back in your container, give it heat, and wait.

When I told you online that it may not hatch, I was basing it on the first picture alone (it seemed like it had the indentations an ooth gets after hatching). Now that you sliced it you have more concrete evidence that it will hatch. Oh, and keeping a small amount of nymphs is not a good idea. Most of them die for no reason at all, so having lots of them (especially when their past their first instar) gives you a better chance of raising some into adulthood. Be prepared to have some fruit flies ready for when they hatch.

The ooth was cut 1/4 from the top and there were only like 4 that were juicy...which were cut and bleeding, the rest was dried and brown.

My sister bought one of those from Armstrongs several years ago. It hatched - zillions of little nymphs. She put some of them in a big cookie container and the rest into her plants. We didn't really have anything to feed them so they started feeding on each other. The outside ones were doing okay until my father watered the plants with a garden hose and we never saw another one after that.

If it had hatched in the store there would be bits of eaten nymphs in the container it came in.

You should have left it alone and just waited the maximum amount of time before cutting it open.

well they told me they had it for about 3 weeks and they were about to sell it back. OK I opened the rest it was just all brown and crispy. I only see 4 nymphs that didnt make it out with the others.

Hmm, if you hadn't cut it open you might have been able to take it back for a fresher one. It's neat cutting open stuff like that though. Any more pics?

um sorry no pictures I scrambled it all up because I was curious to see every nook and cranny terribly sorry
You must log in or register to reply here.

How to Safely Seal a Bog Garden Crack