He's only in a 1/2 gallon tupperware right now, and I've had him since Monday. Probably could've done it a day ago, and I'm going to be gone all day tomorrow.

Ah! That explains it.

BTW you've been gone for years

fredg said:
Ah! That explains it.

BTW you've been gone for years

After being disappointed with how much space was wasted in order to fit the UG filter into the round jar, and after receiving a rather large Anubias in the mail (bigger than I was expecting, anyway)...something had to change.

FredG was kind enough to point out a type of filter that would provide biological filtering with a flow rate that wouldn't bounce the betta around like a little blue pinball.

Continuing in my DIY vein (and because those kinds of nifty things aren't available at my LFS), I built my own. 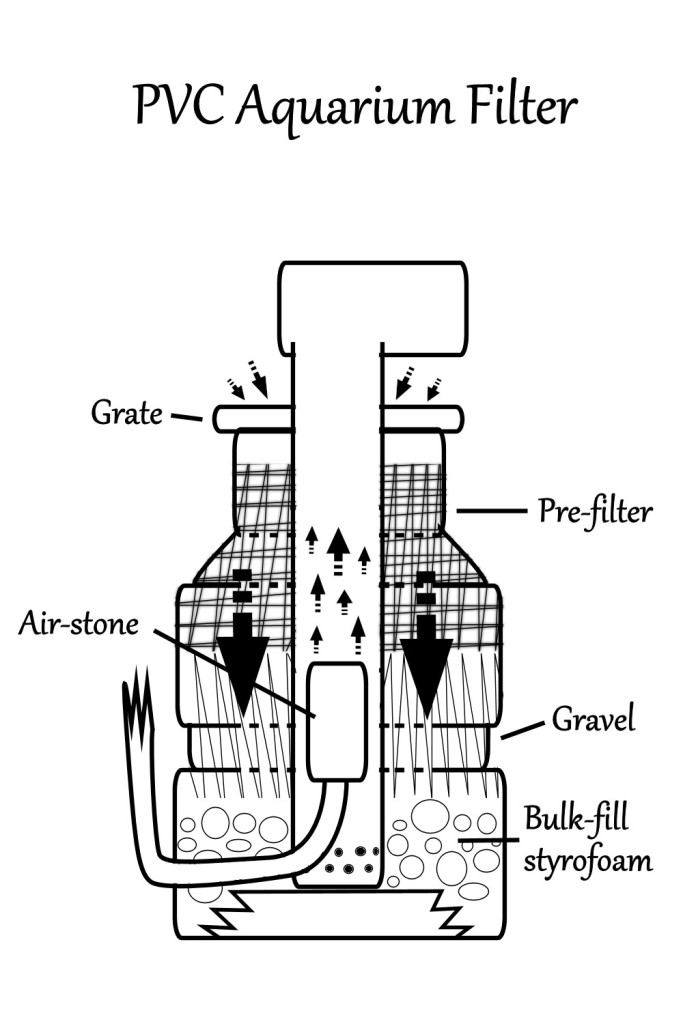 Assembled and in action: 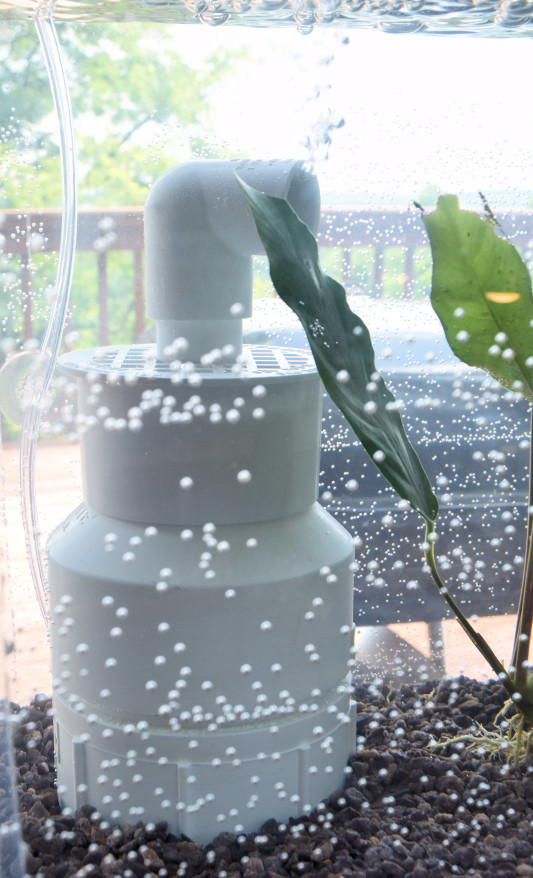 And with some plastic plants to the rescue, decoration-wise, the betta is now warming up in a little baggie 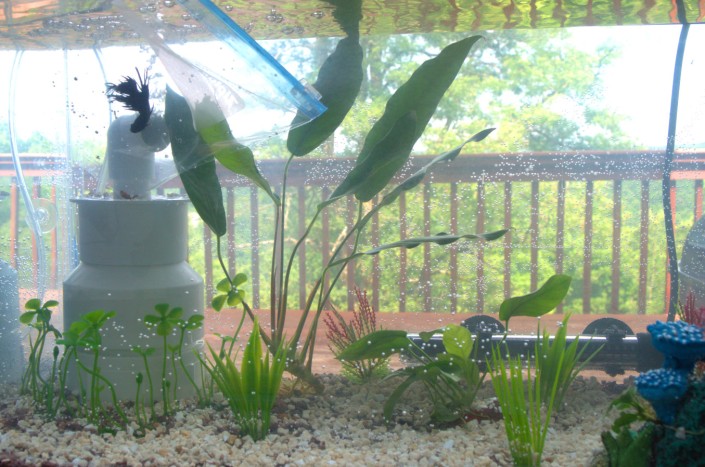 So, changes. Tank-size, obviously. I also used crushed lava-rock rather than styrofoam in the bottom of the filter (I hadn't decided what to use yet when I drew the diagram), which should give the bacteria more space to grow and is course enough to allow water-flow without clogging the holes in the uptake tube.

I checked the PH this morning and it was reading a rather acidic 6.4, so I added in not-quite 2 cups of crushed oyster shell to the bottom of the tank. Should also keep the betta from going into PH shock since it will take some time to dissolve. Final PH should be comfortable for him.

Finally, on the recommendation of a very thorough article on Betta care, I dissolved about a Tbs. of non-iodized salt in a cup of water and added it to the tank.

The heater is keeping the water around 78-80F, and the filter is working....dunno what else to do, lol. I'll just be keeping an eye on the nitrite / nitrate levels and performing water changes as necessary until things stabilize.

Would it be simple to lengthen the airlift?

fredg said:
Would it be simple to lengthen the airlift?
Click to expand...

Pretty simple, yeah. Is there a reason that I should?

The longer airlift would be more efficient

fredg said:
The longer airlift would be more efficient
Click to expand...

But I will think about it whenever it's time to change / clean the media. Would need to empty it, but otherwise it's just a matter of cutting a new length of PVC and drilling the holes in the bottom.

Zath said:
How so? 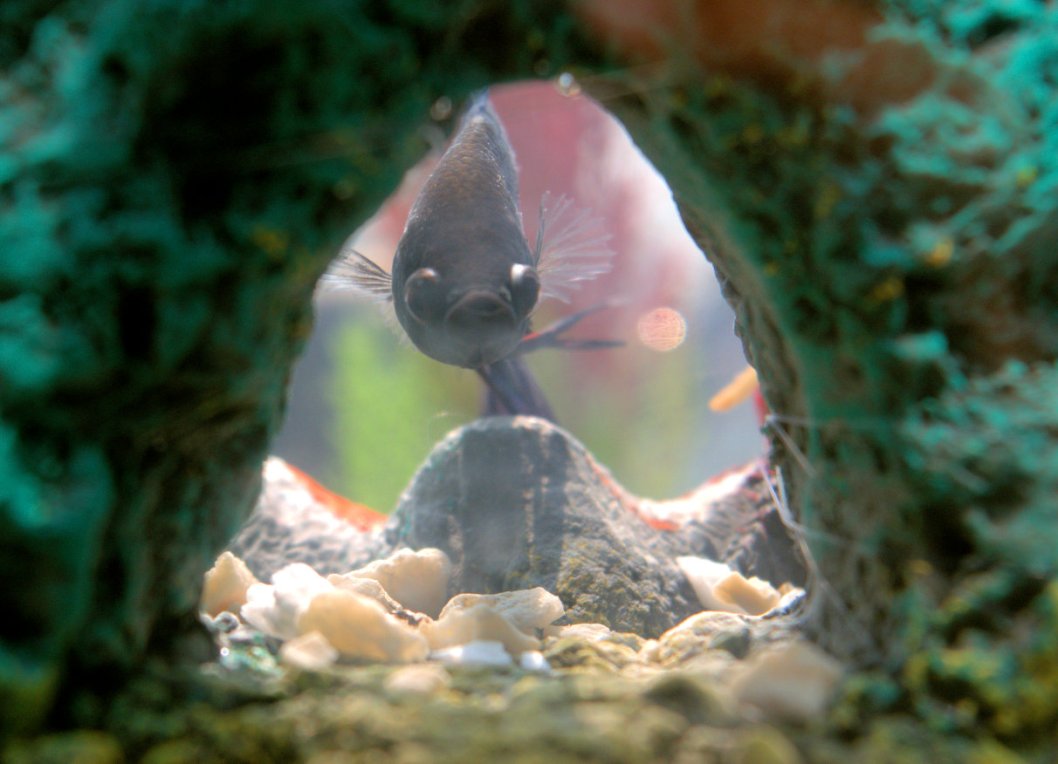 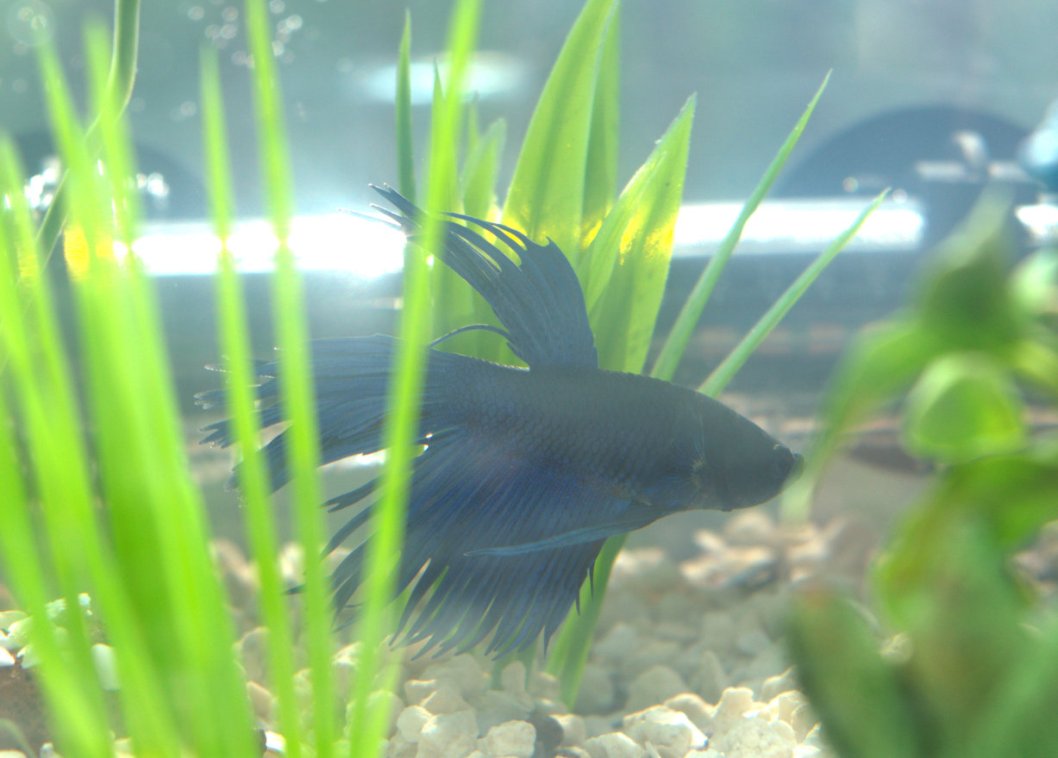 I can't leave well enough alone, apparently. I picked up some ghost-shrimp today (as I had planned, but still), and fuglied up my tank decor by stuffing a couple more plastic plants in there so they could have somewhere to hide. So.....no pics for awhile. XD

I have a couple more live plants on order, as well as a piece of driftwood to mount the larger Anubias on. I believe I'm just going to put the plants into a temporary container until I have everything on hand and I've had a chance to soak the driftwood in a bucket for a week or so, then net all the critters, do a 30% water change, and redecorate at my leisure.

On the plus side, the betta can't seem to fit any of the shrimp into his mouth, so I think they're fine, haha. He did chase them around a bit, but lets just call that...."exercise".

did the final teardown and got all the plants in yesterday. I realized that I had overfed my shrimp, which had made the gravel absolutely filthy in just two short days, so I ended up doing about a 75% water change just because I was trying to suck up as much muck as possible. 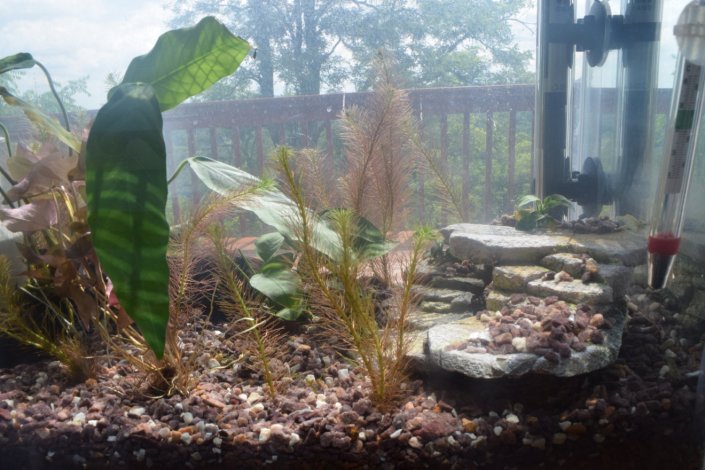 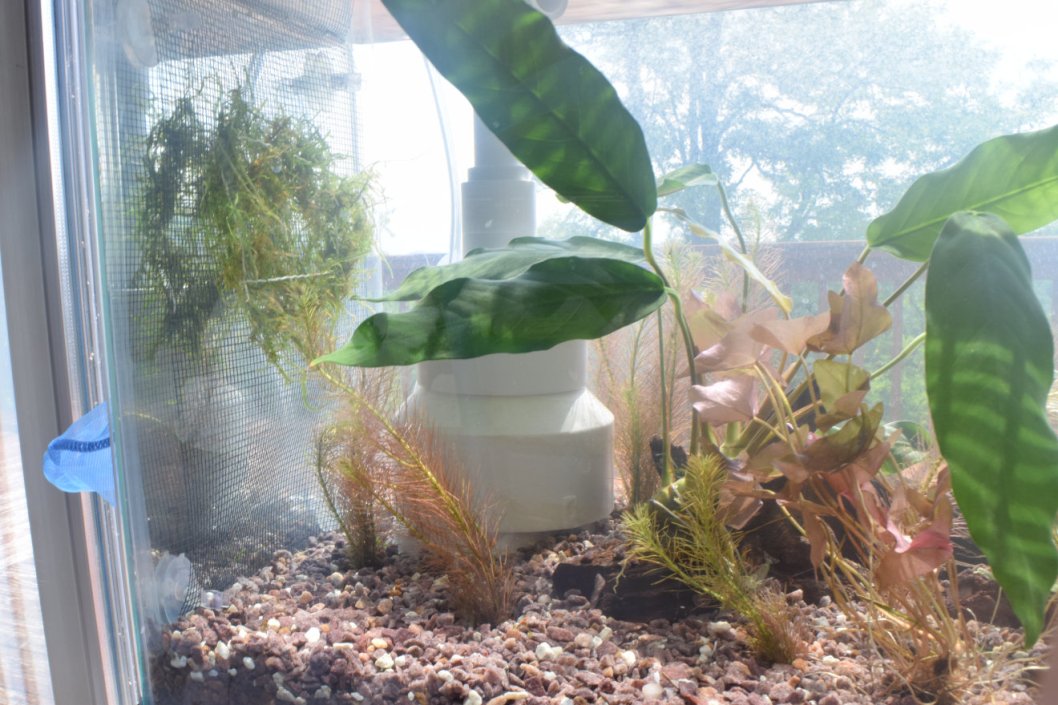 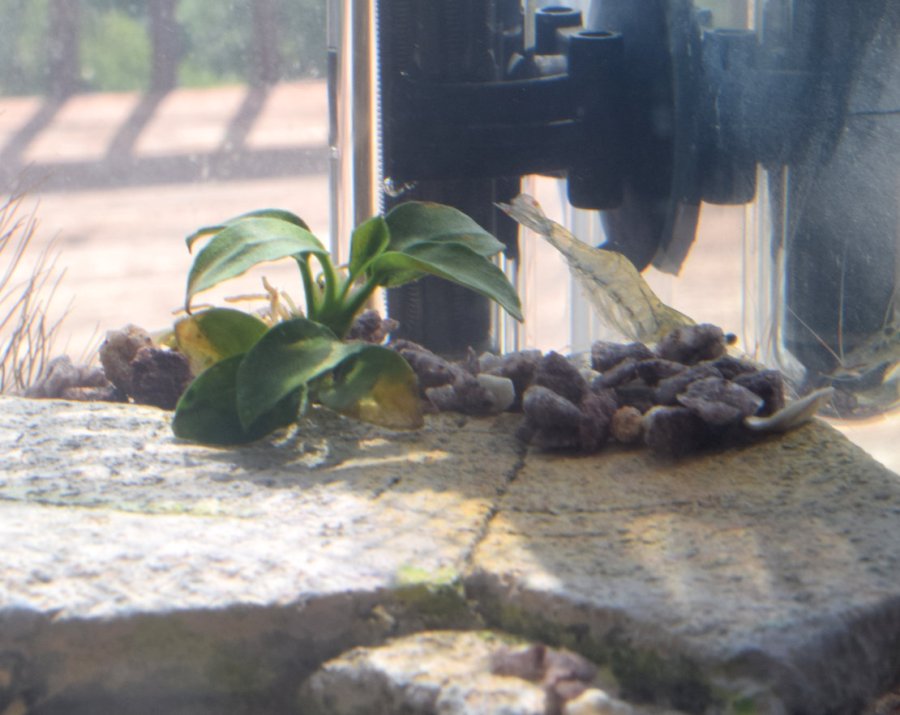 Anyhow, I'm pretty pleased with how it looks, and the variety of plants that are in there. The only one I may move is the Nymphaea stellata. Wasn't thinking that I had just plopped the two biggest plants in pretty much the same spot.

Turned out the driftwood didn't need to be soaked all that long (It sank immediately in a bucket of water. I let it soak for two days regardless before giving it a good rinse with the sink-sprayer, then mounted the Anubias barteri var. glabra minima to it.

Hoping the Java Moss fills in. Not sure of it's growth habits (whether it grows upwards, outwards, or all-aroundwards).

Can still account for 5 shrimp (there were 6 yesterday, I'm pretty sure. XD)

You need an air-powered gravel hoover

Just a little update, but no pics atm (might grab one in a little bit).

Got the hornwort in at least, and the tank is chock-full of plants now. The little bit of ammonia I had building up (.25ppm) is all but gone, two days since introducing them. I also moved one of my water-lettuce from the outdoor pond-bucket (after giving it a good cleaning), and transferred my last little strand of Aldrovanda, though I'm not sure how good of an idea that is, since the water in the fishtank is perhaps a bit more alkaline than it prefers.

The ghost-shrimp population seems to be holding steady at 5, from an original 10 (although with all the plant cover I can rarely see more than 2-3 at a time), and they seem to be doing a good job of cleaning up (at least, their little stomachs are constantly pumping away even though I've only fed them once).

Algae: Getting a very, very light dusting of diatoms, and a light speckling of green-spot algae. From what I've read, that's not necessarily a bad sign, and certainly one of the least worrisome types of algae to have.

I upgraded the lights (from none), to two 30-led strips which, simplified, provide about 120 lumens of 6500k-7000k light per gallon. They come on at noon and stay on for six hours. Remember that the tank gets a few hours of morning sunlight, more than half of which is filtered by a large tree just outside the window. The Rotala wallichi closes it's tops soon after the led's cut out, signifying that there's no longer enough ambient light for them.

I've started dosing (well, I plan to, anyway) a very, very small amount of Seachem Flourish once per week (1.5 ml, which is less than half the recommended dose, and only 1/7th as often).

Plan on letting it sit for a while longer and seeing how the plants grow before deciding whether or not I need to think about C02 injection, but I'm thinking I can get away without it.

I do want to get a little potassium carbonate (cream of tartar? Maybe not) to dose in small amounts to both help feed the plants and raise my Kh without affecting the Ph, since Kh is only reading at 50ppm or so.
Last edited: Jul 10, 2016

Updates and Stuff and Things 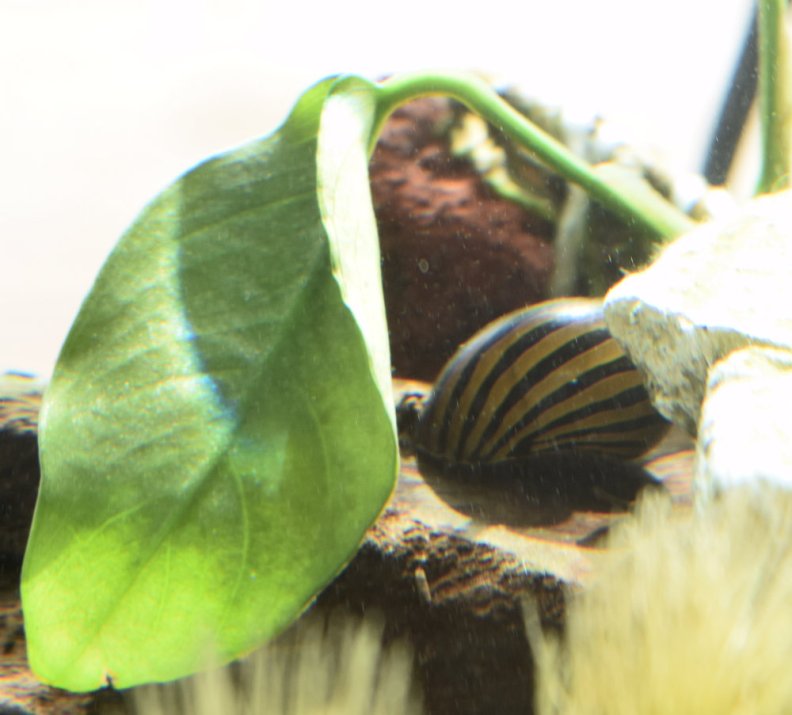 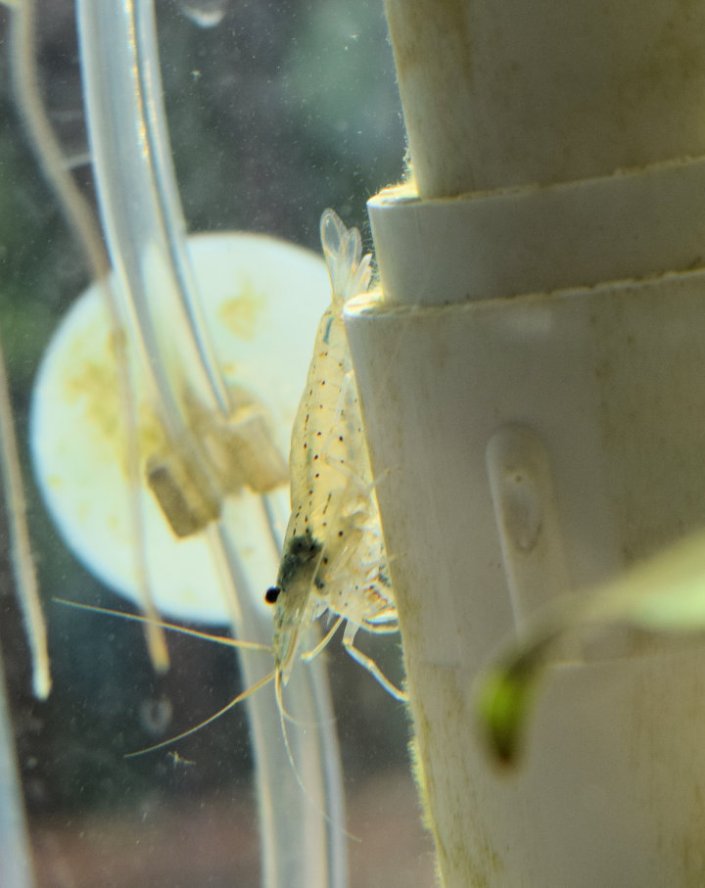 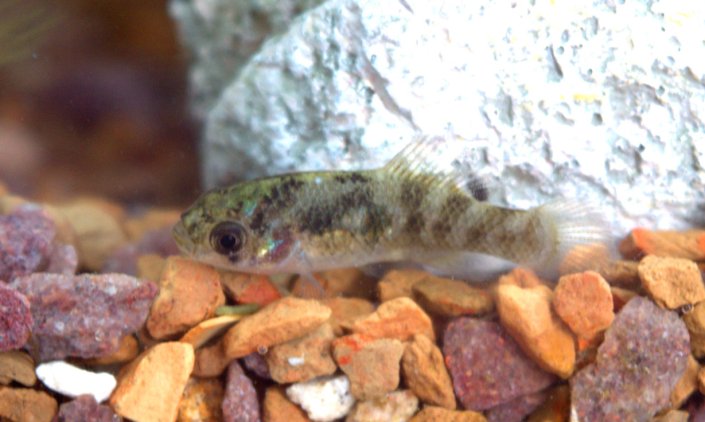 Now, due to the recent algae outbreak (and the subsequent 3-hour cleaning I had to do to get rid of it), I realized something had to be done. With the tank being in sunlight for most of the morning, I doubt that it's a lack of light, so I'm now adding CO2, and about to start fertilizing with the EI (Estimative Index) method. I'm also not going to ignore cleaning. I'll probably do anywhere from a 30%-50% water change every other week (because lets face it, I'm still kinda lazy, so I want to see if I can get away with it). 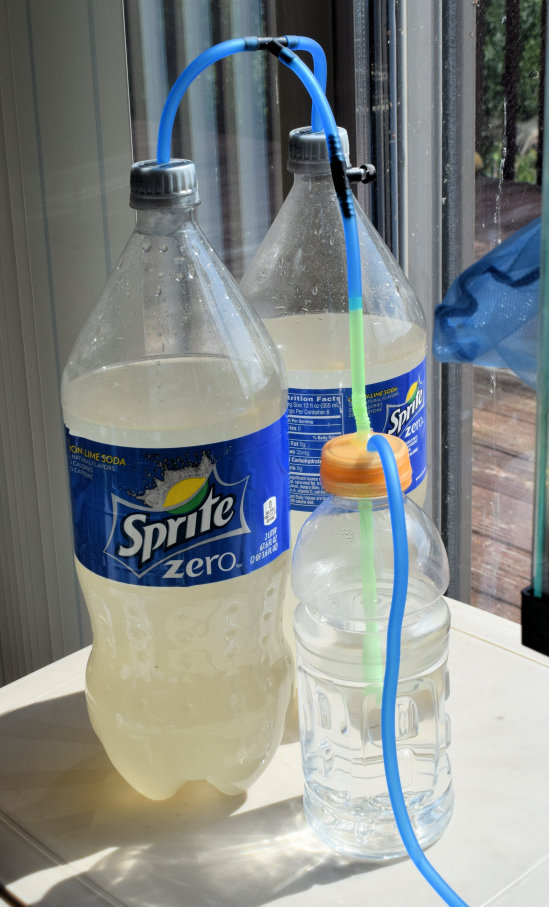 And the latest addition to this ^^ 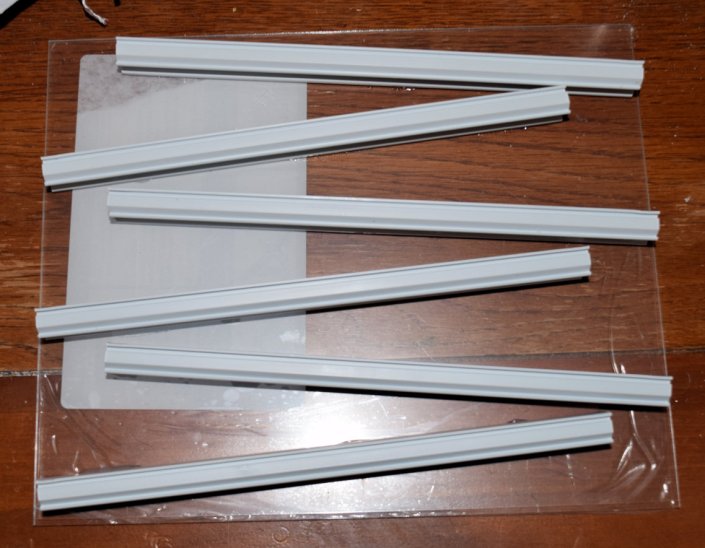 My "industrial" CO2 ladder. Just need to let the silicone cure, drill some holes for the suction-cups, and it's ready to be installed.

If that's a cherry shrimp you added. Then your ghost shrimp will most likely eat them, I know it sounds crazy, but Google it. Also, what kind of fish is that, fish of any kind are generally not good tank mates for bettas.

curtisconners said:
If that's a cherry shrimp you added. Then your ghost shrimp will most likely eat them, I know it sounds crazy, but Google it. Also, what kind of fish is that, fish of any kind are generally not good tank mates for bettas.
Click to expand...

That's an Amano shrimp in the pic. Somehow I lost 3 of the 5 I ordered. I found no corpses, so they must've climbed out. @_@

The fish is actually an American Flagfish. Technically a killifish, it's a bottom-dweller, and mine particularly is a juvenile. It's too small to attack the shrimp or the betta, and too non-descript and shy for the betta to even notice it. Assuming it does well in this tank, it shouldn't have a probelm co-habitating with the rest of the stock.

(I also ordered two Crystal Red Shrimp...one of which was DOA, and worked out in my favor, because now I get a re-ship, with anything else I want added onto the order without having to pay shipping, but I'm pretty sure the surviving CRS was eaten by the Betta overnight. v_v. It looked suspiciously fat the next morning, and I haven't seen the shrimp since.)
You must log in or register to reply here.