I have a strangely set up terrarium made of a 44 gallon pentagon. It has a hill at the back corner, and it slopes dramatically to the lower mound of dirt.
However, it is only lit with a 100w ebay cool white led panel and a 24w CFL bulb. I think this is not enough light, as my plants survive, buy barely get by because there is about 1.5ft from the lights to the lower tier of plants. Is this too little light?
P.S: the plants are slowly turning brown, or becoming green.

TBH I wasn't a fan of LED for reef tanks because it doesn't provide the natural spectrum that the sun does. I was agreed with by LED lovers and presented with a chart showing how the spectrum that CORALS need nicely coincides with the spectrum that LED puts out. While it may be good for corals, it isn't the best for plants in my opinion. I went to a seminar about LED lighting, like hour and a half or two hours talking about it. One of the biggest points that I picked up from it is that LEDs are tricking your eyes, they aren't actually putting out the spectrum that white light is. So your cool whites are a mix of blues and reds IIRC, not a mix of all the colors like real white light is. That is my main argument against LED lighting for plants. It is really cheap, but it may not turn out the best results.

Peter D'amato told me that he uses regular shop lights for terrariums he has set up. Just get a fixture and put a 4500-6500K bulb in it and light it up, it is cheap too. What I did when I had my plants in terrariums under lights was I put a 20w T8 on top of a 29g and a 20w T12 coming from the front aiming at the plants. They grew well and so did the sphag in the terrarium. Not much at all and it worked, I got really good growth.

My advice is to get some shop lights and hook them up, should be cheap. LED isn't the best option for PLANTS. I would use those on a reef tank because it makes the corals look wicked, but not for plants.

Shop lights with 6500K CFLs work amazingly! That's exactly what I use, and my plants have some really nice color to them.

Just fyi: CFL's don't put out "real" white like either. They only have a few emission lines, but they're spaced out from red to bluish and beyond so it looks okay.

I've heard that people make panels of the red and blue LEDs to help plants grow faster etc something like this.

A really bright LED panel would be nice since it's probably very electrically and thermally conservative (sips power and doesn't get hot). Provided you can deal with the temperatures I think some sort of CFL maybe like this dunno would be a good supplement. If there's room maybe you can put the LED panel near the top of the mountain since they don't give off much heat --> those plants won't burn.
B

6500k T5HO 4' 4 bulb ballast for the win. my plants veg big time and get nice red color when paired with my panda sheeting on my grow rack.
K

I have been running 4-10w LED multi-chips (6500k) on my lowland terrarium for the last 6 months and everything's doing great. 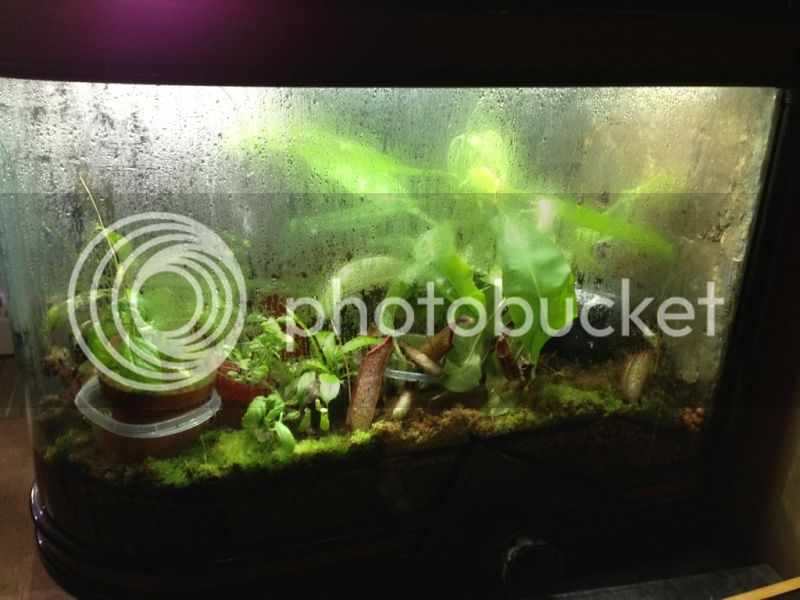 Looks like the LEDs are working well for you Kase, nice work!
A

Maybe it's the humidity. I'll get a small fountain, then work on the lights to see.
I am laso making a red+blue led panel to get some more spectrums in.

asid61 said:
Maybe it's the humidity. I'll get a small fountain, then work on the lights to see.
I am laso making a red+blue led panel to get some more spectrums in.
Click to expand...

A small fogger would probably be more effective and less costly. Those terrarium waterfalls are like $40... It's crazy.
K

I hooked up a fogger. But it puts out so much fog that my sundews have dew from the fog on them (not regularly formed by them). And still the humidity is running at 67% on a good day, 59% on a bad day. My bical is showing signs of humidity stress.

And it's a little late to put hydroton in the bottom.
A

Well I went ahead and order some lights to DIY. Some leds from steve's and a big heatsink and some hips to make a driver with. Just over $60 and about 27w of led.

The advantage of LEDs is that you can choose the wavelengths most suited to photosynthesis (red and blue); however, this advantage is somewhat negated when using white LEDs, which use phosphors to convert colours in much the same way as fluorescent lamps do. If colours are in the bands that plants can't make much use of, such as greens for instance, then they are not of much use. White LEDs and fluorescent tubes will have several spectral peaks and one of these will be in the green band, so will look bright to the human eye which is most sensitive to green but reflected by many plants.

I always choose LEDs with wavelengths in the main chlorophyll absorption bands and add a few supplementary white LEDs so the plants look good to human eyes.
Last edited: Dec 13, 2012
A