After getting an ID for an Aloe plant (variegata- thanks Clint…) that caught my eye in the Cactus and other Succulents forum, I decided to go to Lowe’s to see if they had any. They didn’t, but I ended up buying two Aloe zanzibarica.

Anyway on my way from the outdoor area to the register inside, I stopped at the “indoor plant” area. After a little searching, I found a tray that had a couple CPs (mainly Neps and VFTs). All the VFTs were flowering and looked in really bad condition (as expected…), but then I saw one that was really green, so I took a closer look. It seems that there was more than one plant growing in the pot. The pot was full of traps.

To make a long story short, I rescued it and an hour later I began to transplant them to a bigger pot. There were FOUR individual rhizomes in the pot, each one making numerous healthy traps. What a bonus! All the ones I have bought and seen at HomeDepot, Osh, Wal-Mart, etc. only had 1 plant. Has this happened to anyone else? Is this type of occurrence more common than I think it is?

Stay chooned in for more!

I think I've maxed at out 6 total plants, 3 adults total. It's a byproduct of TC hormones.

Hormones are fun. I take hormones... or maybe it's steroids? I should put some Synthroid into a Nepenthes pitcher and see if it grows a thyroid.

Once in a while I see the ones from Nursery Man's Exchange / Bloomrite with at least 4 small plants in them. I passed on them looking for more mature plants in them but after seeing photos here of pot'o VFTs I've decided that I'll pick up a couple of them when I run across them. Those little plants may even still be in the 'vigorous growth' phase that TC plants go through for a period after being deflasked and hardened off.

Why these pots happen is anybody's guess. Mine is that they probably ran out of more mature plants to fill an order/flat so they just grabbed some youngsters to fill it out.

Any way it is quite a bargain. Enjoy.
F

Yep, I got a pot with 16 Vft's((SCORE))) in it from OSH(Orchard Supply Hardware) it was originally from nurserymen's exchange. At least 12 of them have made it through their first winter.
Lois

today i stopped by lowes and bought a ping that looked kinda weird. when i opened the little box it came in and looked closely, the large parent plant was in awful shape, but all the leaves that had wilted had tiny plantlets growing all over them. after all was said and done, i had repotted them all and counted about 14 separate plantlets.

they'll wonder how many will survive...

But my record was with the last I reppoted this weekend, a single pot of Sarracenia catesbaei, got 24 plants in the end

Picked this up from Home Depot a few weeks ago. Altman Plants label. I can't wait to repot this to start my "Pot 'o Flytraps".

Any guesses as to how many rhizomes are in the pot? 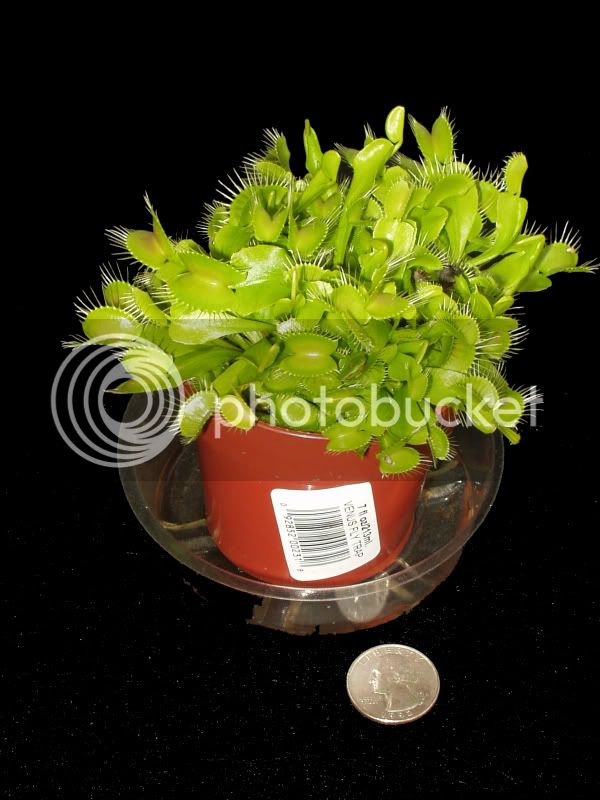 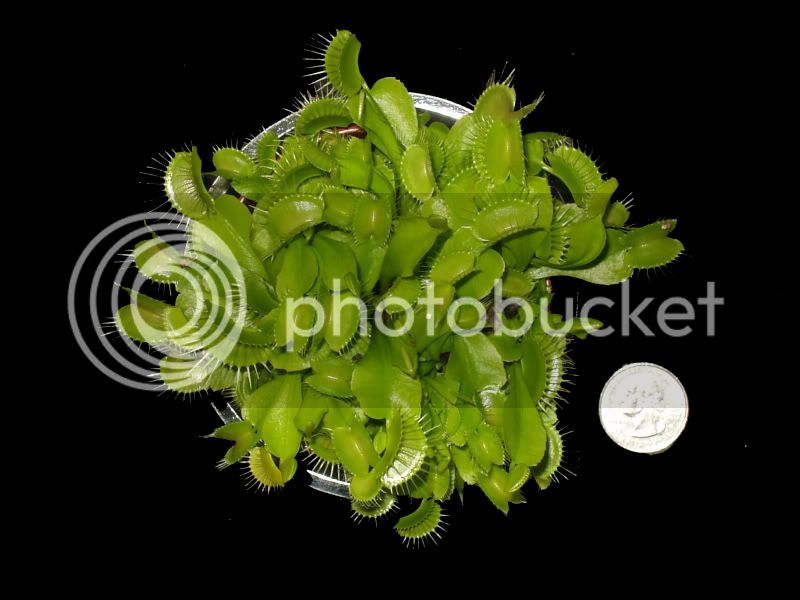 Wow. That is a LOT! There must be at least six individual plants in there. Have you unpotted/repotted and/or counted yet? Was there a dome on it when you bought it?

I thought I got off lucky… Congrats!

TECHNICALLY i got 3 neps in one. there was one main plant with 2 basals. none of em lasted long...
Alex
L

glider14 said:
TECHNICALLY i got 3 neps in one. there was one main plant with 2 basals. none of em lasted long...
Alex
Click to expand...

I also bought a Nep a few years ago that had three total plants growing in the pot. Those same three plants are now monsters, in a 4 inch pot together, pumping out 7 inch pitchers.

Who would have thought?

THAT IS A HECK LOT OF FLYTRAPS !! OMG! wow... a really great find. good job

joossa said:
Wow. That is a LOT! There must be at least six individual plants in there. Have you unpotted/repotted and/or counted yet? Was there a dome on it when you bought it?

I thought I got off lucky… Congrats!
Click to expand...

Yeah, under a dome. I took the photos today. When I brought it home I thought I'd just crack the dome open a bit - it was snapped on really tight - POP! - like one of those party favors - flytrap leaves hanging out all over the place. There was no way to put it back on even part way and too much overhang to put in a plastic bag. There were maybe eight pots - two others like this one - one may have had more plants in it - I compromised between healthy looking and number.

I went back a couple days later but couldn't find a single VFT. I thought they sold out but I found where they moved them to last week - the other mega pots sold out and what was left were half dead :-(

I guess the demand for Cp's is going up. Which is good news for us growers. That means availability should go up.

Next time you're gonna be in Buffalo.... I'm only a half hoir from the Peace Bridge / Ft. Erie.

Yeah, i guess since the plants are created via tissue culture en masse, many of the ones we see at Walmart/Lowes have the tendency to have a myriad of offshoots.

I've gotten several ones from Walmart with well over 10 rhizomes.

If they look dead in the store, they're probly not. A buncha times I said "look, they're dead, ya just gonna throw em out anyway...."
Now, years later they're some of the best plants in my collection.
And I do consider Flytraps to be among the best of CP's, could you imagine how much they'd be worth if they weren't everywhere?
You must log in or register to reply here.

J
Idk what to do lol