Look what they found in my leg! 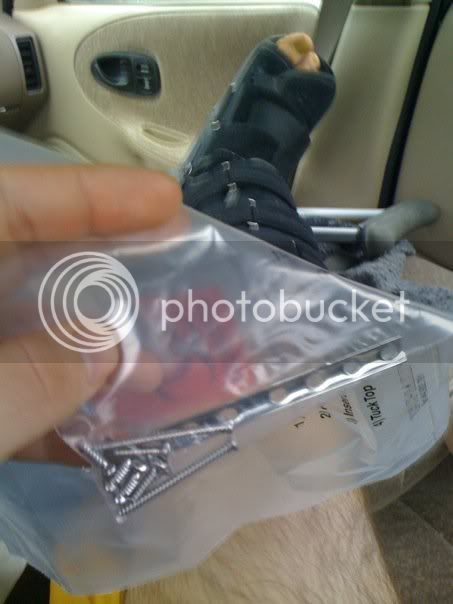 Yay! It actually wasn't a surprise - I've been waiting almost five years to have this crap taken out. I'd post some scans of my x-rays from the original surgery but it seems that the ones showing the installed hardware got lost at my doctor's office. Hopefully I'll get them back when I go for my follow-up appointment in a couple of weeks. Needless to say, they're awesome. Once my painkillers kick in a little more I'll go scrounge up the pictures of the break.
~Joe

Lol they forgot some screws when they put you back together

Hehe. No, yesterday was about putting me back together without any screws.
~Joe

That is awesome, congrats. Do you think you'll be able to feel a difference? I've never had to have screws, but did break my ankle in basketball. That was no fun...

I'm not certain. I did lots of prodding and flexing yesterday to try to get a crisp memory of what it felt like with screws inside. It's covered with lots of bandages now, and the stitches are pretty uncomfortable, so I can't really tell yet if there's a difference. But I sure hope so... I've had a very difficult time staying on my feet since my initial injury. With any luck, once I'm recovered I'll be able to take up jogging again. At the very least, I think I'll be much less sensitive to having my leg kicked in my martial arts classes.
~Joe

Wow how did they get there in the first place?

I broke my ankle in my martial arts class back in '06. We were doing running drills, and I should've been on the balls of my feet, but I have bad posture and had my weight on my heels. My foot locked into the mat, and my body rotated, but my foot didn't, and something in between had to give. People said they heard it loud and clear, from clear across the auditorium/gymnasium space where we practice. I don't remember hearing a sound but I do remember feeling the snapping sensation running through my entire body, like movie sound effects.
It didn't really hurt, but was shocking, and when I hit the mat I instinctively lifted my leg off the ground rather than trying to stand on it. It looked super messed up - my foot was pointed in totally the wrong direction. I didn't think it was broken though, because it didn't hurt. I was hoping to hell that it was just dislocated, but my sensei refused to try to reduce it (quite smartly - one of my nerves was resting against a bone shard and I probably would've lost a lot of functionality in my foot.)
It was a really funny experience. I was very calm the whole time. Most of the students seemed to be freaking out; before my teacher got called over, I had to tell people what to do, which was strange. The stupid ambulance and emergency room people did a really bad job with me, and had me supporting my leg with my own strength for hours... it ended up really screwing up my hips and lower back, in some respects even worse than what happened to my ankle.
~Joe

I'll bet you're glad to get that junk outta there. I hope you can heal up quick!

My pal had someone step backwards on the arch of his foot at a concert and it busted the bones in there and stayed broken for years. Once it would finally heal it would rebreak very easily for a long time afterward. He's a big tall guy so maybe that had some effect on not letting it heal quicker.

Well if you let it go too long, the broken surfaces will heal over, and then they won't knit properly when someone finally sets them. I'm luck enough to be a fast healer, plus I don't have any of the usual vices (caffeine, tobacco, alcohol) that inhibit recovery from skeletal injuries. I also had the bones set within a few days of my break, and was in really good health at the time, so things turned out well. My doctor said it was the cleanest break he'd ever seen, and complimented me on my bones. It was weird to say the least.
My friend had a really gnarly break shortly after mine. He broke his right leg in a similar spot, but is super skinny and athletic, and his skin was so tight (and he kept disobeying doctors orders about rest so much) that the stitches wouldn't close and the hardware kept poking out through his surgical incision. It was well over six months before they finally got him put back together.
~Joe

As a kid in high school I was taking martial arts classes and one time during physical education class decided to show off in front of my pals and of-course girls in the class. Well I was doing some jump kicks and landed badly on my foot with my entire body weight shifting to the side. I ended up braking my ankle. My "awesome" phys ed. teacher told me to go home!
Did not feel pain at first due to body going into shock. But when I got to the changing room my foot started to swell up and I started suffocating when tries to take off snicker from a broken foot.
Well after changing I limped home with broken foot, alone. My home was about 2 or 3 miles from school. So I had a fun experience getting there. And of-course as soon as my parents saw my foot they drove me to a hospital where I was told that I had a broken ankle (fibula if I'm not mistaken). The good thing is while I was limping home I managed to set the bone in place

Hear the Call of Nepenthes

By Joe! Proof! You've been abducted by aliens, these foreign objects have no ther explanation

I'm glad they finally took them out, and you can continue your recovery.

I was hoping you were gonna show us some alien implant the doctors found and removed.

Hehe, we'll have to save that for one of swords' threads larry. XD
Thanks for all your words of support, everyone. I'm already walking on it and I can feel the difference; I don't have to concentrate on keeping my foot from pointing out to the side. The stitches still hurt though. I certainly won't be running any marathons today.
~Joe
You must log in or register to reply here.

Fool-proof Adlrovanda culture... in a bucket
2

Acres of sphagnum in my back woods
2