Has Grafting Been Used to Extend the Heat Tolerance of Cool Growing Nepenthes?

Like Nepenthes, there are many species of Passifloras from high elevations, in particular many stunning Andean species from 2000-3000 m near the equator (Tacsonias). Most such plants can only be grown successfully in the mainland U.S. near the coast in California. An example of a Tacsonia, Passiflora 'Mission Dolores', a hybrid between two high elevation species, P. parritae and P. antioquiensis, is shown below. Flowers are 7 inches, peduncles are up to 2 feet. Fruit is edible (and tasty). Perhaps it's obvious why people would like to grow such plants in places beyond such a limited range. 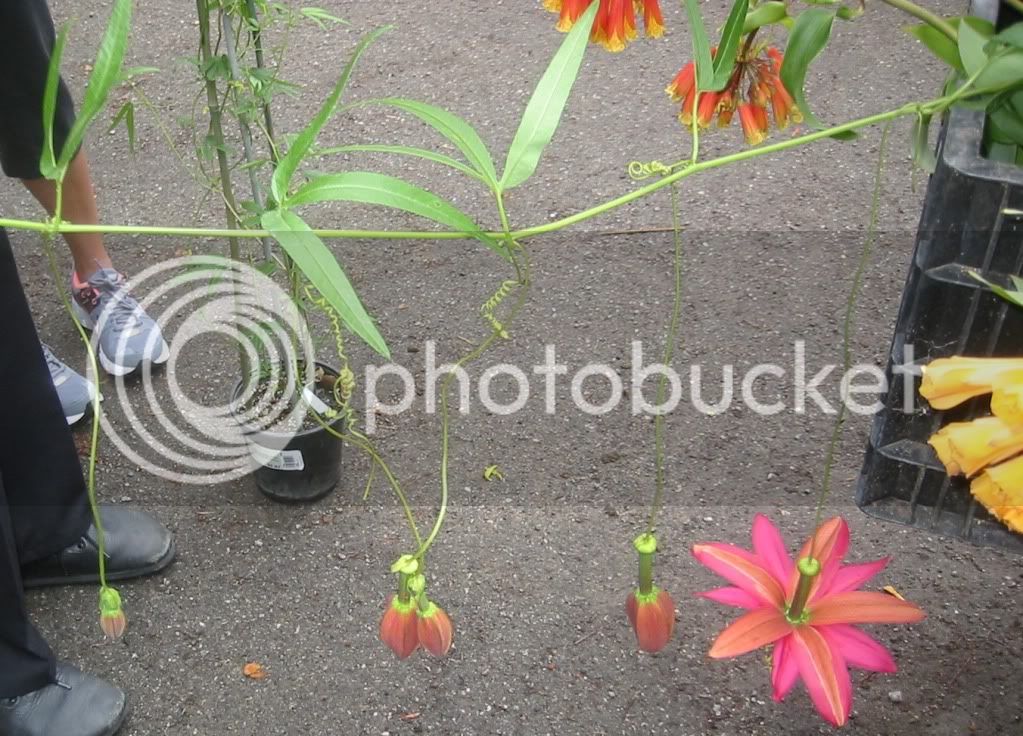 Like Passifloras, many of the most striking Nepenthes species are also from high elevation. Has any effort has gone into grafting these plants onto temperature tolerant Nepenthes rootstocks?

I realize grafting Nepenthes is no doubt less straightforward, with less material available than for a rapidly growing vine. Still, I'm sure people have tried grafting Nepenthes. I would emphasize that grafting is a technique that those who are skilled can perform on even the tiniest seedlings.

Although I have no first hand experience, I am told that Neps can't be grafted. But that's really a minor matter compared to the distress this post has caused me. You got me completely hooked on Passiflora, and I have only recently come to terms with the "fact" that many of the really desirable ones are beyond my ability to keep due to our summer heat. Then you pull this stunt! Thanks a lot!

This subject of HL to LL grafting has been broached before in the past but I don't believe anyone has actually tried it.

I myself am hesitant to believe it would work as Nepenthes vines, especially very long ones with lots of active pitchers are not as dependent upon their roots for either water or nutrients as perhaps smaller plants or plants of another genus may be. If I remember correctly it was in Charles Clarke's Nepenthes of Sumatra where he describes old N. aristolochioides vines traveling through the canopy completely un-attached from any sort of rootstock which had aged and rotted away over the years but the plants appeared to be continuing to grow. In that case it would seem grafting wouldn't make a difference.

Also, it is my experience that it is the growing points of highland Nepenthes which tend to die off first in warm conditions. You can see this if HL Nepenthes begin reducing their new leaf sizes further and further until finally the plant has just a nub of undifferentiated tissue where the growth point was. Death generally follows very soon after.
Last edited: Jul 25, 2015
R

I'm not convinced that the effect is due to the ability of the roots to transport water (or nutrients) to the other parts of the plant. Biological macromolecules are stable up to only a certain point. I see no reason to expect that a plant that never experiences temperatures above 75 F in the wild would have evolved such that all essential macromolecules are stable at temperatures, say, 20 F above that. All it takes is one such essential molecule to be unstable at a higher temperature, and the life of the plant is at risk. If so, a drop during night to cooler temperatures could replenish stores of whatever factor is essential and keep the plant alive, in some cases. That is observed in many cases, and it would be a puzzling observation if impaired water and nutrient transport were the reason for lethality at higher temps.

My guess would be that grafting on a temperature-tolerant rootstock simply enables the grafted plant to synthesize a heat stable version of whatever factor or factors are the problem. So what we would be talking about is a diffusible factor(s) (macromolecule(s)?), not a superior ability of the rootstock to transport water or minerals. If so, I would expect it would work for Nepenthes much like other organisms.
You must log in or register to reply here.