Menu
Log in
Register
Install the app
You are using an out of date browser. It may not display this or other websites correctly.
You should upgrade or use an alternative browser.

All of my plants looked pretty sickly for about a month, some even 2 months after receiving them. I think anyone would be pretty pissed if they were thrown into a dark box and shipped 5,000 miles lol. Just give them a little time and they will bounce back stronger than ever.

So just called the APHIS Maryland office. Holy hell that is one fast talking prompt system. It almost sounded like the contract spiel at the end of radio commercials except you had to listen and make choices from it lol. I am reaching almost 3 weeks now on my 587 so figured I'd call and check on it.

A friend of mine just applied for the Small Seed Lots permit. It took 27 days for the permits to get approved and he is still waiting for the paperwork in the mail. He applied on-line. It is possible the budget cuts are affecting APHIS.

Finally got approved for both but still waiting on decals. It took 30 days for the 587 but only a week and a half for the 621. Maybe sending them $70 is a bit more motivation? Their website is being really finicky at the moment so not sure if I have to actually request the decals or they just automatically mail you a few.

They automatically sent my labels. I did request more before they sent them so id have plenty though.

Btw, I never updated this about my missing plant. Turns out it wasnt missing just overlooked. I'm from KY so I think I should get a break about missing it.

Haha good to hear. How's everything looking? BTW who did you order from? Just curious.

If they had actually forgotten a plant, I wander if you could just call the inspection station and see if you could forgo the additional phytosanitary certificate/labels. Especially if they were on the original phyto cert. That would just suck having to spend an extra $30-45 for a mistake.

I ordered from Cedrics Carnivores out of France. If it wouldve been his mistake I just wouldve made another order and had him send it with those.

The plants are in recovery. Hopefully I'll have something to show in the next couple weeks.

So got my shipping labels yesterday and WTF? I thought they were at least stickers. They are just printed on normal freaking paper. I don't want to risk just scanning it in and emailing it but at least make it so there's a reason to mail them to me and me mail them to the exporter. Besides you have to tape over it just to get it to stick to the box so I don't see how they could even tell the difference. Anyway, just had to ***** to someone about this lol.

I'm looking at three envelopes here that contained seed. All of them have little rectangular patches where the green and yellow label was carefully razored out with minimal cutting into the layer of paper underneath. If the label is merely taped on it is an simple matter to razor around the tape and look at the backside of the label. Every package I've gotten has had the label carefully removed in the same manner.
R

rcl What are you importing?

NaN, double sided printing. I know I was griping about them earlier but these really are just printed on normal paper. Even if they were removed by a razor I don't see how one could tell the difference between what was mailed to me and what could be printed. Don't get me wrong, I don't want to waste $700 and try and forge it. Hell I am one of the biggest pro big government/liberal guys you will find, but I sincerely thought they were at least stickers the exporter had to attach to the package. It was just one of those damnit... this is what I have waited 3 weeks for after I got approved for my permits kind of moments.

Ramdacc, I pretty much just waited for the first Czech nursery to respond to get my first order. I have a few thousand that I am trying to split between them and Wistuba but don't want to do everything all at once. The biggest niche that has left to be filled/is the most viable within the US is the drosera market so focusing on that first. You can go to cascade's for pings, flytrapstore for vft's, droseragemmae for pygmies, and most sites for sarracenia but for normal drosera, nepenthes, heliamphora, cephalotus, utricularia, etc. there literally isn't a place to go. I understand they are more difficult plants to grow and nepenthes especially take years to grow but seriously, why do we have to import these things just to get them?

This first order from labflytrap/carnivorousplantsshop.eu is 2x all 13 petiolaris complex species, 1x D. ascendens, felix, kaieteurensis, meristocaulis, roraimae, villosa, and tomentosa var. glabrata for South America, and D. glabripes, hilaris, longiscapa, pauciflora, regia, rubriflora, slackii, & trinervia for Africa. 2x Heliamphora heterodoxa, minor, nutans. Finally doing a 50x order of both D. kenneallyi & typical Cephalotus. Don't worry I plan on doing a week long kenneallyi giveaway and a week long ceph giveaway once I get them and think they are viable to ship. I figured do a different competition each night like pick a number, what shot should I take tonight, post a cool pic of x, etc. The whole point of me importing this stuff was my frustration of not being able to get it so want to have a little fun.

As it stands CPS.eu is waiting for my decals so I can adjust the order if you want something too. I have lists made out for CZ, Best, and Wistuba but got to see how much I can expand without taking up a huge amount of real estate within the house. Basically trying to find a happy median between growing as much as possible and an eventual apartment in DC. I only wish those two goals were one in the same lol.

It's also a simple matter to simply look at the label and see if it was printed with green ink or yellow and cyan dots that come out of color laser or ink jet printer. And for all we know they could be using the same magnetic ink that is used in printing checks.

For those of you interested in importing plants, please note that as of May 2014, the USDA now requires a "nematode declaration" to be included with any phytosanitary documentation. This will likely not be noted on your permits, so you must inform the exporter.

Thanks for the heads up. I will send an email to Michal to double check.

Called the NYC inspection station to confirm. Here are the countries affected. Seems like it is the majority of countries we import from. 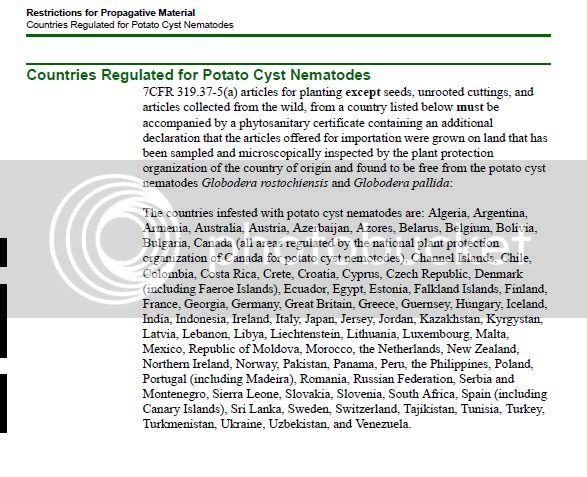 It seems APHIS is moving further in the right direction by not only emailing shipping labels as .pdf files, but also new permits. This should cut down considerably on time and costs associated with imports.
P

I got the notice in email today.

A little late but just now seeing your guys' post. How do you open the labels as a PDF? Do I need to request new ones?

Also if it really is true maybe my light-hearted/sarcastic email actually made a difference lol.
You must log in or register to reply here.

Plant of the Month February 2021