Accidentally triggered Dormancy in Tuberous Drosera | Any way to halt or reverse it?

Well, my new really great looking Drosera ramellosa is going dormant. I am pretty sure my new conditions has triggered dormancy since Day Temps get to 82 degrees sometimes and it isn't dipping as much as it could at night. I am guessing the space is just too easily kept warm despite the apartment kept to 69 degrees to 70. Certainly it is my fault as I had the plant too close to the light as you can see in the pics below.

I can move it downstairs to the Garage growing area that is low on humidity around 30-40% but gets colder as low as 55f degrees and then ranges to 60 during the day. I thought of this as too cold for the plant but maybe it would be better down there with some more light added.

I had optimism as I had read that over 80 was just about on the edge of it:

One piece of info:

Temperature: Extreme heat (over 90 degrees) during their growing season may send them into dormancy, many species experience light frost in the wild for short periods of time but must be protected from freezing
Click to expand...

Pyro said:
Temps for these guys can be sort of flexible. Night temps seem to be the main trigger for these guys, they become very active once nights start to hit 5C (40F). Day temps are okay up to 30C (85F) but better if they are in the 23-25C range (75-77F). The main thing is a steep drop at night. If you can get it down at least 5 degrees that is okay but 10+ is better. Try to avoid freezing them but they can handle frosts if they are not hard.
Click to expand... 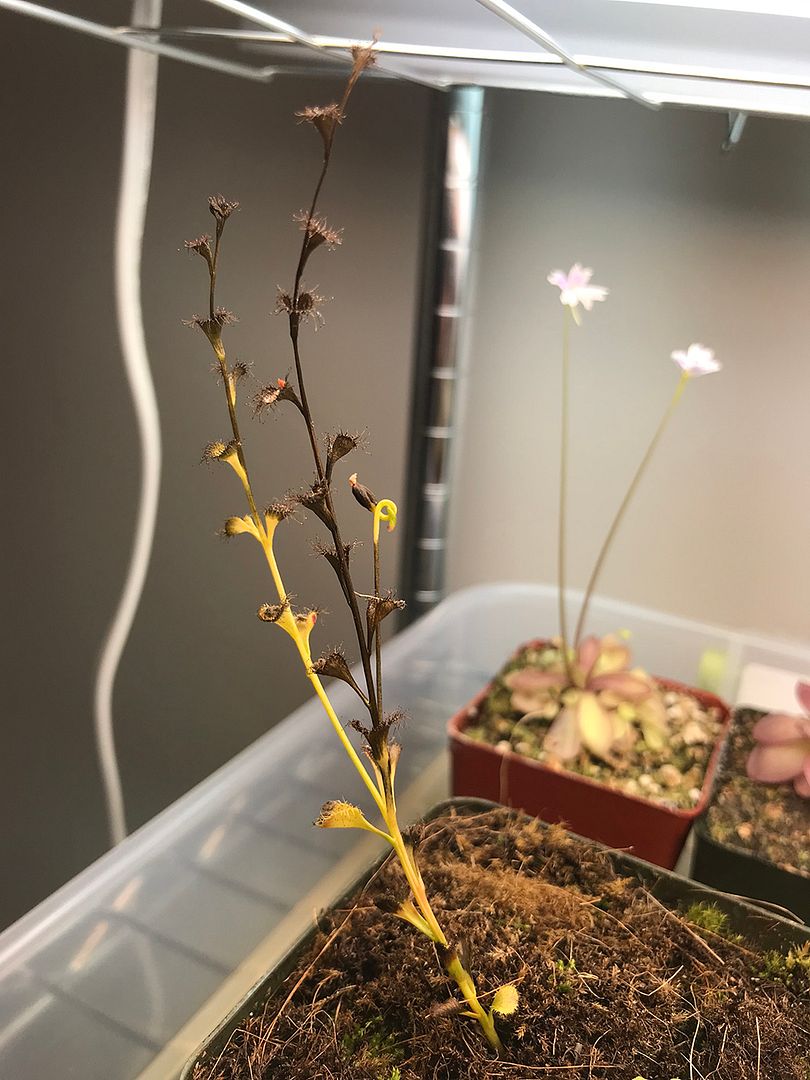 How the lights are hung to keep it way bright and while the other plants are loving it, the ramellosa is just too warm here for sure. 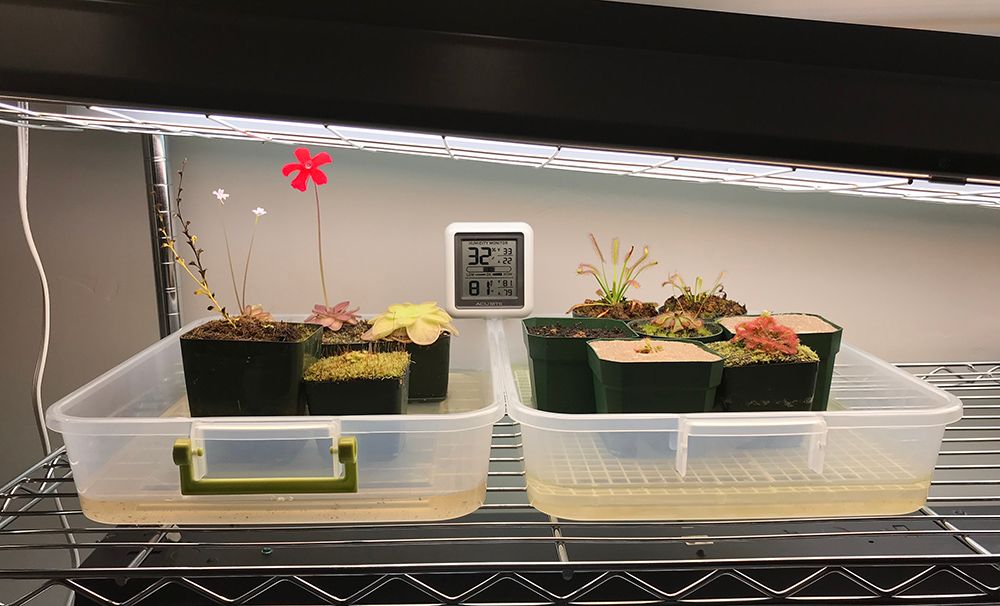 The Drosera hookeri is looking okay still and I am optimistic it will be shooting up some vertical growth soon! 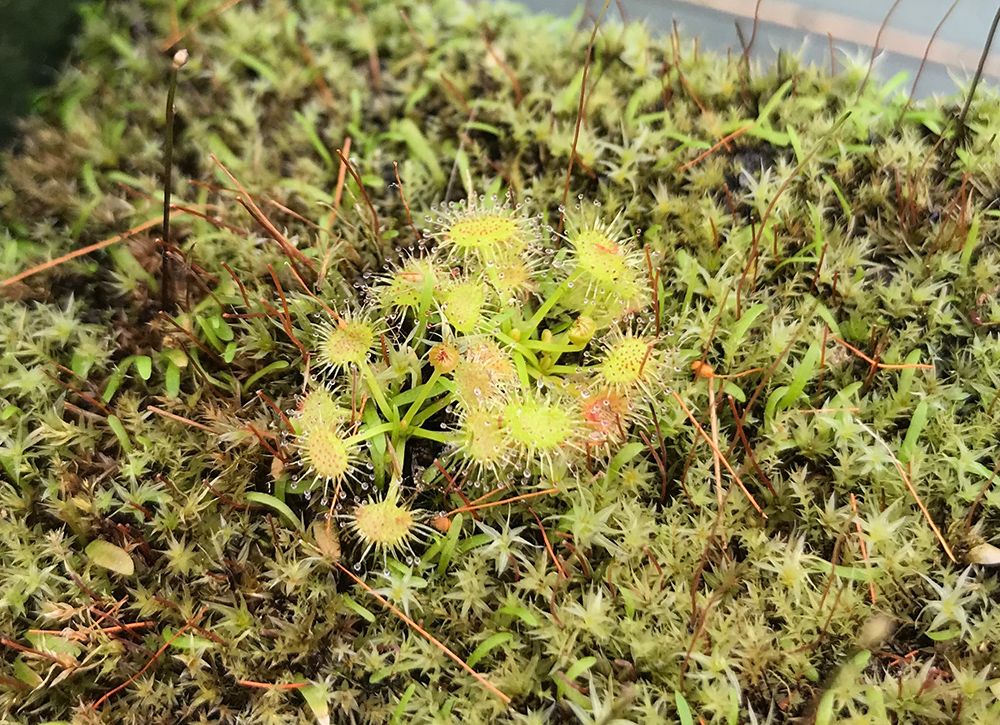 There is no need to worry about too cold unless you are getting below freezing in your grow area. My tuberous 'dews grow in my garage where it gets into the high 30's (F.) in mid-winter with no problems. I do consider 80 to be too warm for most species, unless you are choosing to induce or maintain dormancy. Perhaps your ramellosa can recover but it seems doubtful. My suggestion would be to move it to your cooler area and see if there is any recovery. If the foliage dies all the way back dry out the soil and deal with the plant for dormancy. It looks like it might've been able to grow long enough to store some energy, fingers crossed. D. hookeri being in the peltata group is likely more tolerant of warmer temps, tho' being in a rosette probably keeps it cooler as well. It is certainly easy to cook stems and leaves that get too close to lights.

With your advice enough to convince I moved the hookeri out with the ramellosa to the garage. Where the current temp is 61 degrees and is at the lowest 55 degrees. This garage stays surprising warm but I guess since it is in a row of apartments it is very well insulated so I won't have to worry about any freezing temps down there. I just hope the ~30% humidity levels can do okay for the hookeri. I added extra lights so could be enough for it. Sadly it will take a bit to get used to its new light level. It is for sure a little less light than it had but could work wonderfully.

I so wish I had been willing to put them both down there from the moment I brought them home. I loved that ramellosa and didn't expect to trigger dormancy with the 80 and so much water. But I forgot my photo period was set for long sunny days. So that along with the 80f heat, no wonder the plant thought it was no longer winter...

Thanks again for your advice. Will update this thread as the hookeri adjusts and grows!

Once dormancy has been triggered, I'm quite sure there's no way to stop the process. If you keep the pot in a cool place though, it may start growing again in a month or two. It's probably going to reduce the size of the plant by exposing it to short and abnormal seasonal changes, but it'll survive if you can keep the appropriate watering.

nimbulan said:
Once dormancy has been triggered, I'm quite sure there's no way to stop the process. If you keep the pot in a cool place though, it may start growing again in a month or two. It's probably going to reduce the size of the plant by exposing it to short and abnormal seasonal changes, but it'll survive if you can keep the appropriate watering.
Click to expand...

Right now, I am keeping it filled with water in its tray. But yeah, it will definitely not have the strength or size it would have had I not triggered dormancy. I feel foolish but an honest mistake. The degrees that I could be okay from my quotes in the original post made it sound like I could be fine. But it is always a case by case situation and in my case it went dormant. Not surprised either since it came from a Greenhouse in California. So it was experiencing MANY degrees warmer conditions at my place. So yeah not surprised.

The hookeri should be shooting up soon and I will keep photos coming!

Here is the current condition: 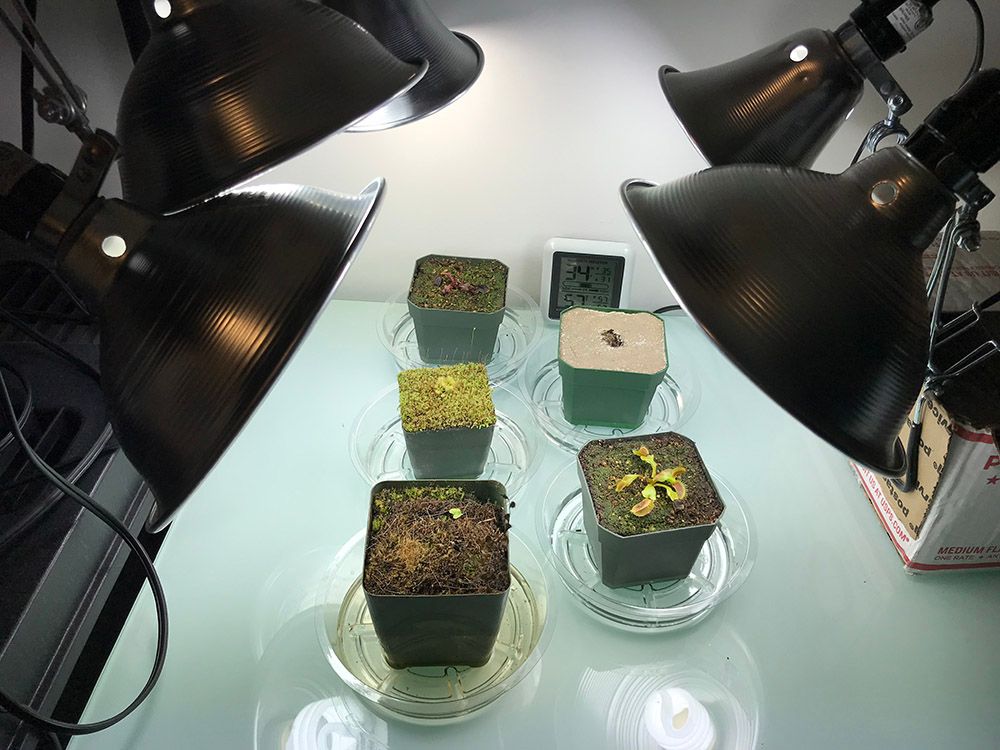 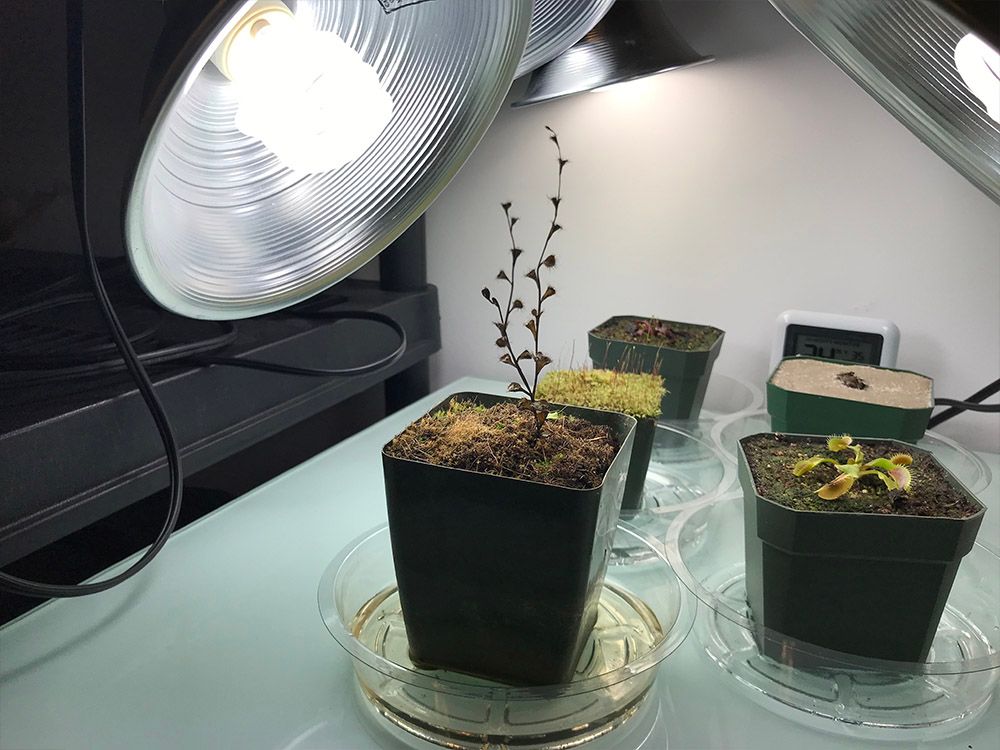 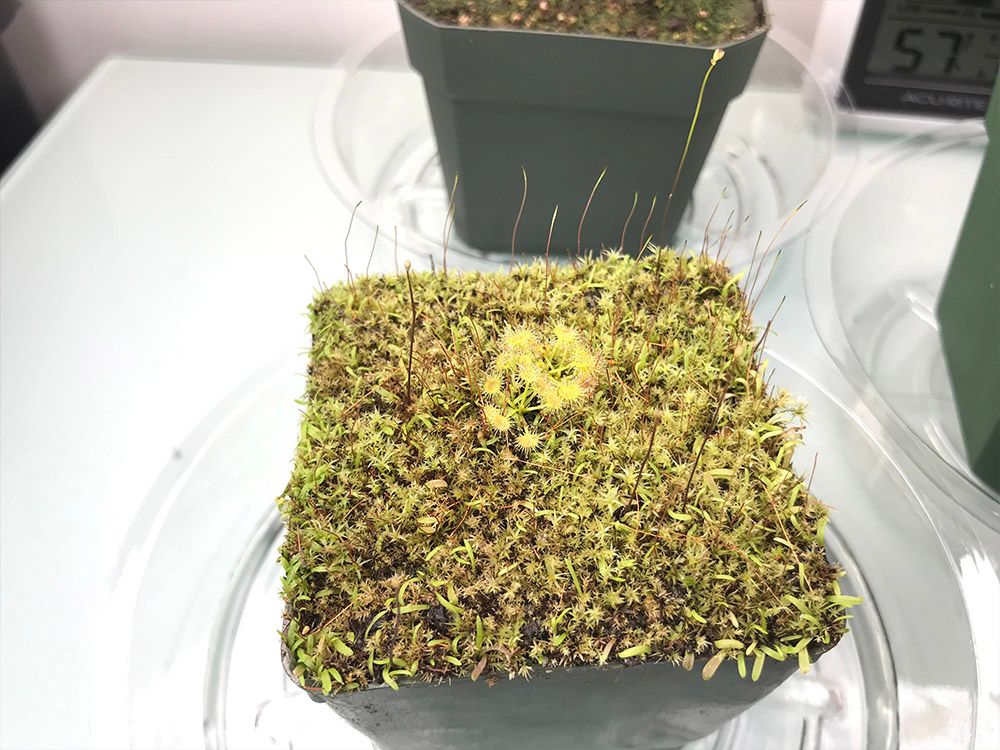 So the plant has fully died back and I let the tuber rest a couple weeks maybe three....and then checked on the tuber: 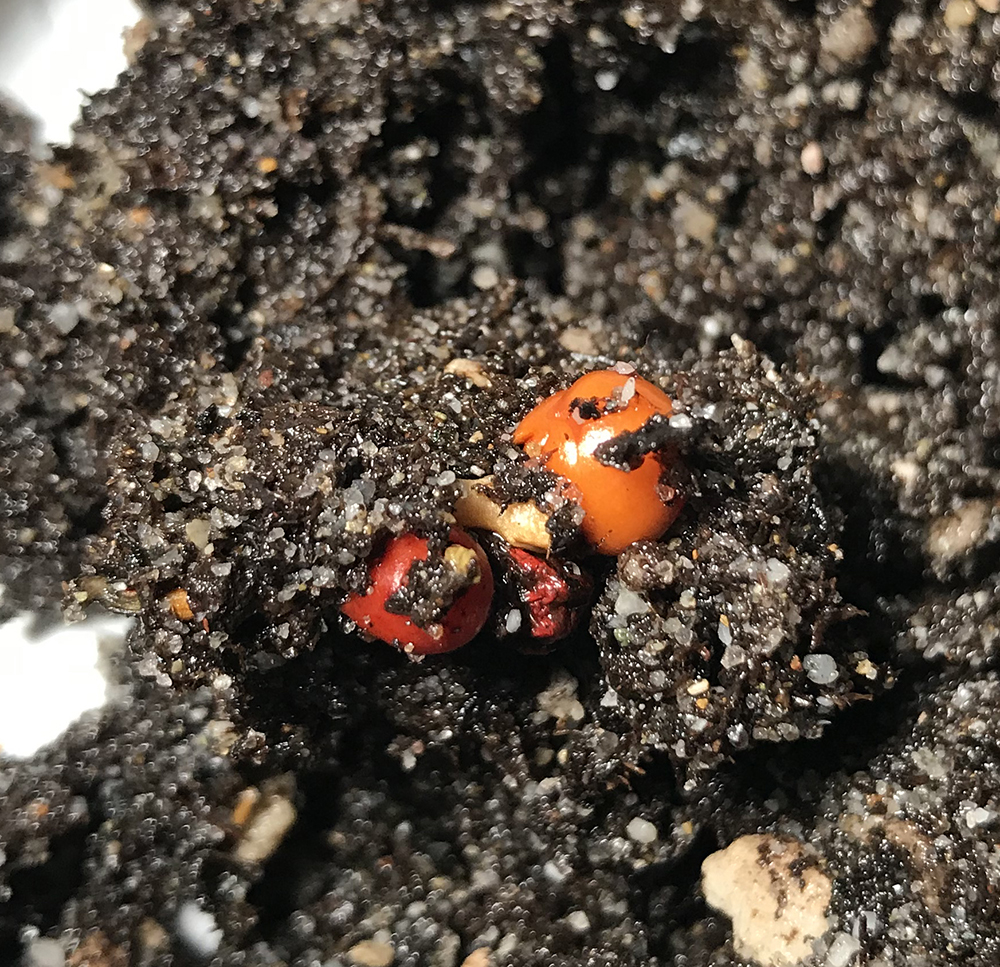 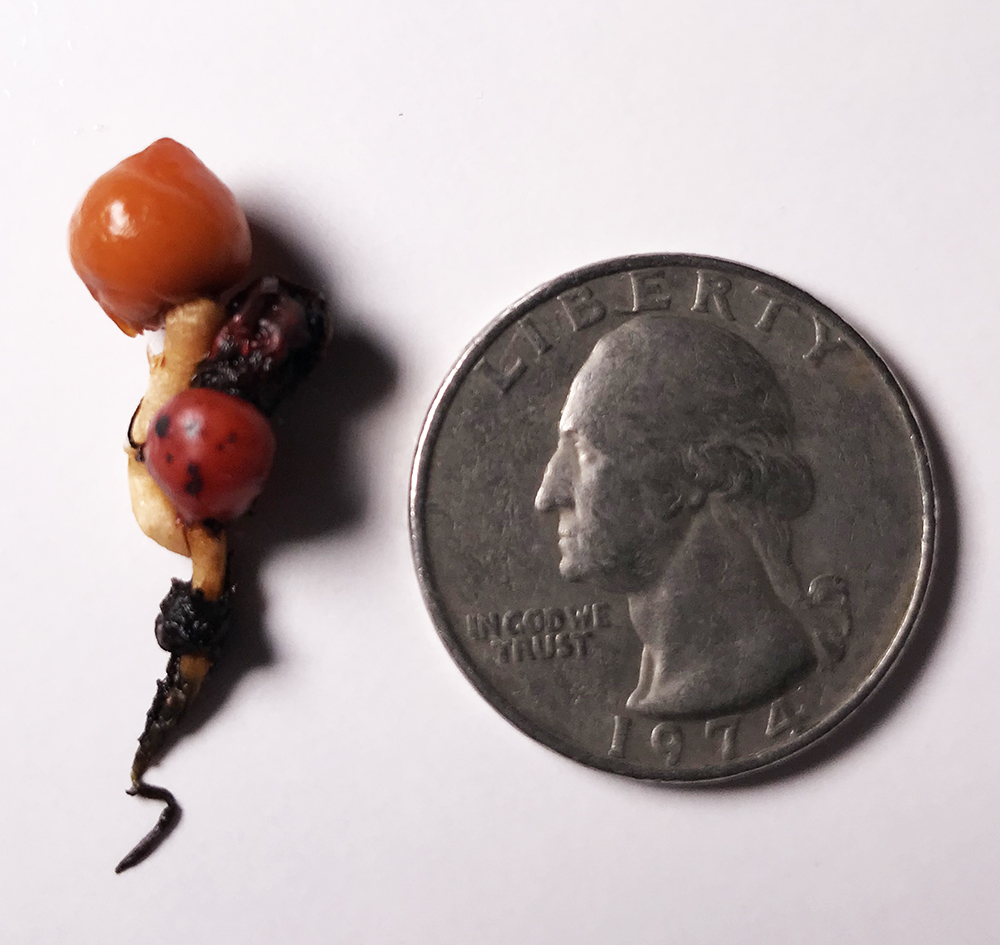 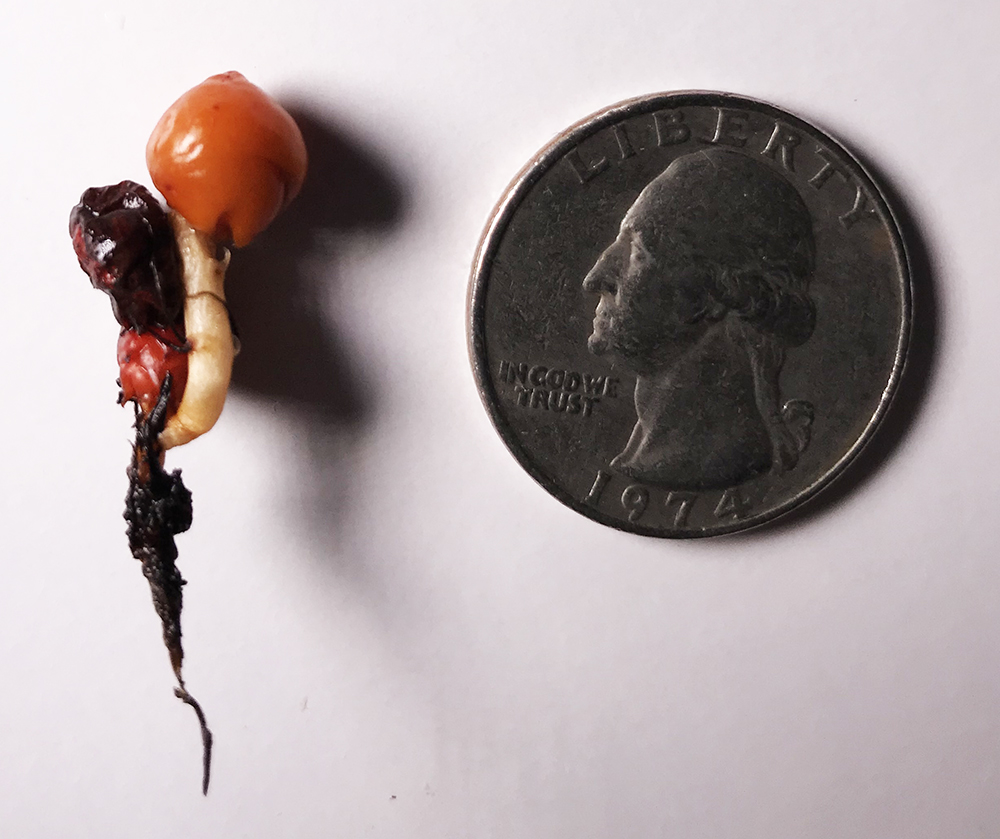 Returned the plant into its soil I gently removed it from right away and crossing my fingers it gets interested in the cold temperature of the garage and the light to do some more growing but not expecting anything. I will keep the soil wet until the other plant the D. hookeri shows signs of going dormant.

Although, the hookeri is still not growing vertically. I fed it two fruit flies but it was really one per rosette and I have 3-4 rosettes it appears. I also had a fail with the second feeding where it became a leg and wing tug of war that resulted in a dead dry fly but no food. I have it all on timelapse though. hehe love doing the timelapses.

I will be feeding the plant again tomorrow and will get a nice long several hour feeding capture at 20 second intervals. We will see how much complete feeding I can capture this time since I still don't have a new larger memory card...should get to amazon now while I am thinking of it.
Last edited: Jan 5, 2019
You must log in or register to reply here.

C
I just bought this fragile Drosera, help me resurrect it pls :D