I'm hoping that some of you may be able to help offer some guidance about my ping. I'm not sure what species it is, and I'm not sure what it's doing right now. I do know that it is very happy though. I've poked around the forums and google a little bit and I think it could be a Pinguicula Titan which is a hybrid of 2 Mexican pings, an Agnata seed and an unknown other as the pollen parent. But I only think that because of google image search similarities. This is my first ping ever and really the only houseplant I've ever really had. I was given it at a terrarium building class almost a year ago. Any assistance on what to do with it in its current form would be appreciated!

This is what it looked like a year ago. Tiny little thing. The terrarium itself was about the size of a softball. 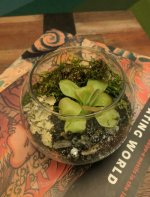 It sort of stayed looking like that for many months until I moved to a brighter apartment, and then it exploded in size and I had to transfer it to a much larger terrarium. 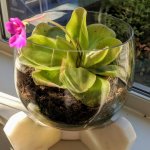 The new terrarium is about the size of a cantaloupe or other melon. The ping itself is large enough to fill both hands if I were to need to remove it. It's absolutely huge, especially compared to when I took it home a year ago. It began flowering a few months ago after it engorging itself on like 30 fruit flies (thank you to the compost bin in the kitchen). It started with 1 flower and then it had 4 flowers simultaneously, and then 3 flowers "died" and were replaced with 3 new ones. Right now it just has 1 flower and I think it's transitioning to another phase? I'm not sure what it is doing. 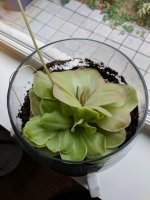 I took this photo today. You can see the stem of the 1 remaining flower. It looks like the plant has divided itself, with the second one having different looking leaves. The larger one (parent?) has large smooth round leaves and this one has smaller leaves that aren't round as much as they are ragged/rough around the edges. They are both are still mucous/sticky. The smaller one just caught a fruit fly earlier I saw when I was inspecting it. I'm not sure what to do with it at this point. Is it okay to leave them together or do I need to remove the ping from the terrarium and separate the 2 and find a home for the other? I'm not sure I want 2 pings competing for the same amount of flies, though so if I need to separate them I'll likely gift it to a friend.

Any idea to the species?

If anyone is curious about how I take care of it and how it lives, I give it a little tap water from the top about every 3 days. It lives in its terrarium in about a 74 degree fahrenheit room on a window sill facing north in the Seattle area. It's a pretty bright spot. Not as bright as the south facing window that I'll sometimes place it on. The south window was so bright over the summer I worried it might burn the leaves so it's been living most of it's life on the north window. The soil is an organic cactus mix that I had laying around the house that my roommate uses for his few succulents. (I should point out that he had a ping as well but it died due to unknown reasons. I think he over watered it and it rotted.)

Thank you for any tips about this big boy!

Larger images can be seen in my Google Photo album.

Can't give much certainty to what the plant is hybrid-wise (though 'Titan' may be a possibility), but the difference between the plants may just be one side is getting more sun than the other. The wrinkled appearance may be because the plant might still be getting a bit too much water being in an undrained container (Mexican Pinguicula for the most part like an nearly entirely mineral soil with very high drainage, though the succulent mix might also have some fertilizers in it that the more shaded plant is showing a reaction to). If the soil dries out enough a reversion to winter phase leaves will be seen, very different from what either is producing now. That they're together isn't really a problem, but maximum size will be reached if they're on their own.
J

What's the tds of your tap water? Carnivorous plants need low mineral water such as rain or distilled or they die, but considering you have had it for so long it must not be too high.

may be a corolla front picture to determinate ?

for me divides them in 2 pot , and changes substrate by a more mineral substrate ( then more draining)

actually we go back into their dormant period so rather a substrate just wet and pots in the shade,for their dormancy prefer a temperature of 12 to 15 °c.
Last edited: Sep 30, 2018
B

jwhittaker813 said:
What's the tds of your tap water? Carnivorous plants need low mineral water such as rain or distilled or they die, but considering you have had it for so long it must not be too high.
Click to expand...

Mexican pings actually like some lime in their soil; they’re not bog plants and their needs are quite different from plants like flytraps and sundews, or even most temperate pings for that matter.


Sent from my iPhone using Tapatalk
B

Doesn’t look like Titan to me. I’d guess a moranensis variety


Sent from my iPhone using Tapatalk
You must log in or register to reply here.