Ok, up for auction today is an absolutely killer Carolina genetics flava atropurpurea. If you don't know, now you know but I got it bad bad bad for flava, and red tubes in general. I've had Waccamaw for a number of years, but one of the first crosses I did with it was to cross cuprea 'Best Clone' from mike wang with Waccamaw. Supposedly, cuprea 'Best Clone' (aka Cali Carnivores clone) was a long ago wild collected plant that was supposedly fully red in the wild. Best Clone can get pretty coppery red for me in the greenhouse, but magic happened when I grew out a whole seed batch of Best Clone crossed with Waccamaw. We don't know where Best Clone was originally collected from, and we don't know where Waccamaw was collected from, but I am absolutely certain that both of these plants are Carolina genetics. There were a number of fantastic plants that I kept from this crossing, but this by far is one of the most intensely colored clones in the seed batch.

The first three photos below are the exact division you are getting. I have only ever released 2 other divisions of this clone, so you will be in rare company. The final photo is of the mother plant in September of 2019. It looked as good last year, but i've only got so much time to go around photographing my flavas! The division was taken in January of this year, and is nicely established.

Bidding starts at $5. Shipping is $8 (US only) and can be combined with my other auctions. Don't miss out on this opportunity, because there isn't enough of this clone to go around. 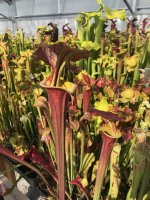 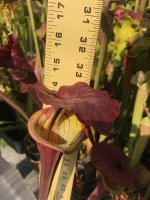 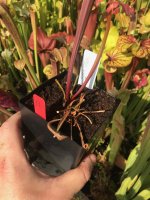 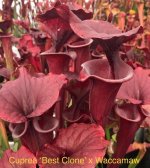 15
That plant is beautiful!

This item has been paid, please arrange shipping
P