Up for auction is a pygmy package containing 2 Drosera pulchella and 1 Drosera helodes. The Dros in the orange "pot" will also be tagging along if it looks like it has recovered or is in the process of doing so. That one is Drosera stelliflora. (It had a bit of an accident resulting a repot. In case things go south, I am not going to count it as an "official" part of this offering.) 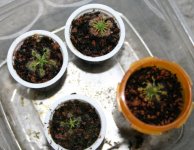 US only
Bidder pays shipping (estimating $9 unless the bidder wishes to do First Class instead.
Starting bid: $5

An orchid fancier with a CP problem

This item has been paid, please arrange shipping