I saw a cutting of this Nepenthes for sale and it sounded interesting. The person I got this Nepenthes from said they got it from a Thai grower. I'm very happy with the purchase and I rather like the coloration of it. It simply isn't anything like what I expected. Maybe there was a mixup on the original breeders part? I'm just looking for any insight into what you guys think this cross might be. It does grow very well as an intermediate as would be expected. It doesn't take intense light to get the red color my plant has. The first pic is of an intermediate/upper pitcher and the second pic is of a full upper. Both have been open for several weeks so this is the mature coloration. The last pic is a detail of the leaves. Let me know what you think. 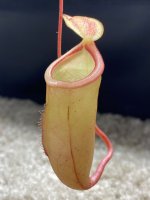 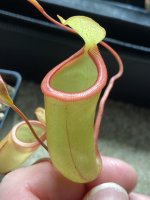 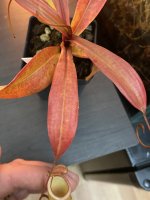 It's exactly as labeled. The hybrid just washes out the better traits of either parent (thus far seemingly a standard for most attenboroughii crosses done, though not many have been) so you get an in-between, simple result. I expect similar of my albomarginata x attenboroughii though that might at least result in an oversized albo with the dominant tendencies of that species.
G

To Borneo and Back Again - And Wrote A Book About It

R
Is it possible to promote vine growth on a nepenthes alata?

Why does my sundew not have any tendrils?