This is my small intermediate terrarium. I created it a few months ago to house my N. hamata (at that point it was more of a highland terrarium) but as time goes on and the air conditioner I was using stopped working as well it became more of an intermediate terrarium. This is probably it's final form, apart from moving out the Sarracenia when they get big enough. This used to be a 6.5 gallon aquarium, with a built in sump box. The sump box turned out to be very useful, because I can use the final chamber to hold water and a fog maker. This made humidifying the terrarium easy. The fan on the light fixture blows the fog through the hole that the aquarium return line originally went through, and the fan that's inside the terrarium itself blows that fog throughout the terrarium. Using an Inkbird humidistat I can maintain the humidity at 80% very easily, though less water would be needed if the light didn't blow outside air into the terrarium.

The light is a Fecida 600w running at about 35% intensity. This is just about on the limit of what I can do at this distance. It's almost too much, even for the Heliamphora. For $40, I couldn't ask for anything better as long as it stays reliable.

The fan is just a generic 120mm computer fan that has a controller and plugs into a standard 120v outlet. It runs at the minimum setting and is still a bit too powerful. It's mounted to the side of the terrarium with magnets.

Day temperatures are usually in the 75-80f range, and night temps are in the 63-68f range, depending on how well the air conditioner decides to work.

The plants contained inside are: in order from left to right starting at the back: 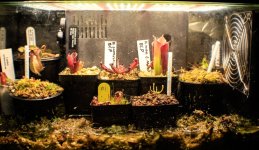 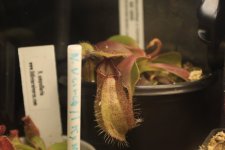 N. robcantleyi x hamata
Not my original one unfortunately, and I don't like this one as much as I liked my old seed grown one. I think they used the Tambusisi variant of hamata for this one instead of the Lumut variant, and the pitchers darken and lose the purple tint that I loved about my old Robmata. 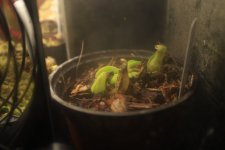 N. robcantleyi seed grown
Sorry about the bad angle. It was hard to get the camera at a good angle while having enough light, and it's a pain to take the plant out because of the fan. It's not particularly impressive anyway. 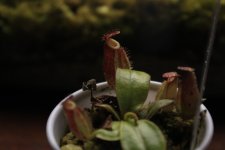 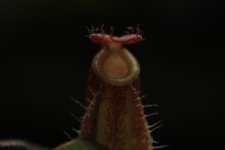 N. ampullaria seed grown.
This is going to be a stunning plant when it matures. Gorgeous red coloration already, and some faint striping already visible. 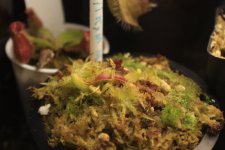 N. veitchii K x M seed grown, #1 or A as I've called it.
Speaking of plants that should grow to be stunning, this is the larger of my two veitchii seedlings. I never grew veitchii when I was in the hobby in the past, and I wanted to change that, but I also didn't want a mass produced one that looked ok at best. I wanted something that would be special. Not necessarily "Candy Dreams" special, but more than just a plain green peristome. This should have the potential to be squat with an amazing striped peristome. Bred by Mike Fallen and grown by Windy City Carnivores. They seem to still have some available, so if anyone is interested... 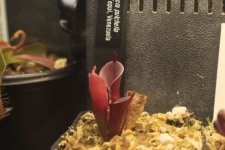 Heliamphora pulchella Abacapa Tepui, Wistuba clone
Nice plant, stunning under strong lighting. Seems to be super slow though, even compared to my other Heliamphora. 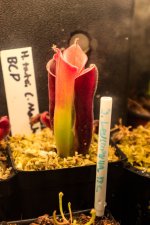 H. tatei C. Marahuaca, BCP
This thing is growing like a weed by Heliamphora standards. I've only had it for a few months, it took one of those to settle in, and it's already grown two pitchers and is working on another. 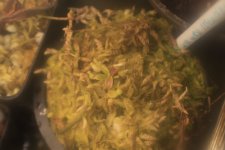 The much smaller N. veitchii that hitch hiked as a freebie on the soil plug that it's big sibling was in. Should also be stunning if I can keep it to maturity. Hoping for a male/female pairing. That would be very nice, especially if both are winners of the genetic lottery. 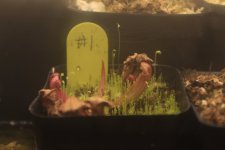 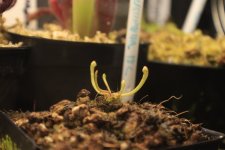 S. leucophylla Baldwin County, seed grown by myself from my big mother plant. Outside chance this could be a cross with S. flava var. maxima, but I don't think it's likely. I hand pollinated and I think I used a net over this flower. This should be the result of a selfed flower.

Eventually all of these will likely end up in the big, permanent greenhouse we're going to be constructing, but for now they are loving life.
B

Lovely setup, and you aren't kidding about that ampullaria. Excited to see how it matures.
G

Beautiful plants!! i have a 2 sarracenia purpeas one is a venosa and i forget the other one but they were my first ever plants and grew from 2inch pots to 6 inch pots in like 4 months indoors. That ampullaria looks like it's gonna be quite spectacular!!
You must log in or register to reply here.