This spring marks 20 years that I have been growing CP's!
I started my collection in the Spring of 1994, I was 25 years old and had just moved to Rochester for a new job..
Some of my VFT's, and a S. leucophylla or two, are probably those original 20 year old plants!
(I have no idea which ones though..)

For 20 years I have been using "The Fridge Method" to overwinter my plants..
using an actual fridge for many years, and for the past 8 years using a cold stairwell..
For many years I brought the plants out of dormancy in Mid-February, after a 3 and a half month dormancy,
(which is all they need, based on their native climate)..but then the plants would have to sit indoors for another 6 weeks
before they could go outside in April..(they go into their dormancy spot around the 1st of November)

For the past several years, I have been trying just leaving the plants in dormancy until they can go outside..
usually in early April..My criteria for bringing them out is "a forecast that has 7 to 10 days with nightly lows *above* freezing"..
or at least 30F (-1C)..

but! the plants look totally fine! :grin:
they look the same as they do every Spring..
so, looks like no problem! they havent started to grow at all, they have remained cool and dark until today..
photos! 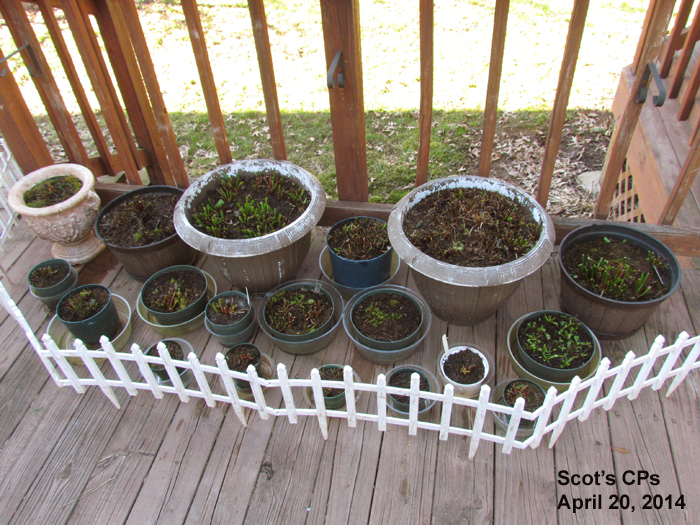 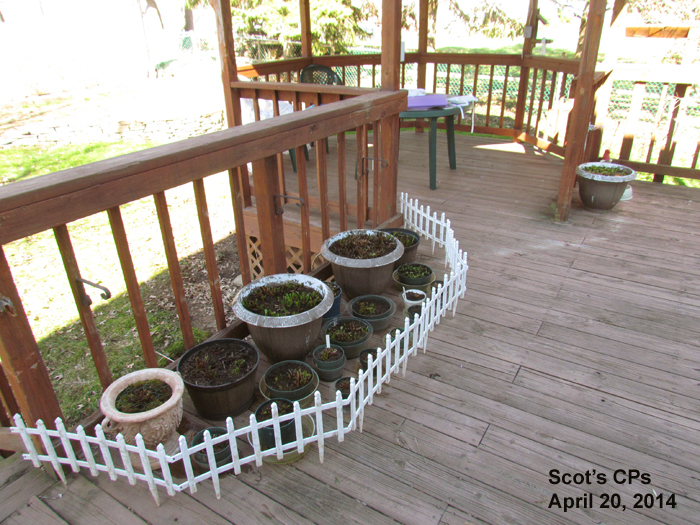 The white fence is to keep our cats from drinking the "tray water"..for some reason they love it, even when its dirty and peaty..
I have to do a full repot on the whole collection this Spring, I do a repot every 2nd year, and this is the year..
I will probably do that next weekend..

Hey Scotty I'll let you in on a secret. That fence only stops the cats when they know you're watching!

How do you keep the birds from laying waste to your plants? I have had reoccurring issues with grackles (primarily) and occasionally other birds ripping pings and vfts out of pots. (I wondered if they were hungry for fresh new growth greens.) Last year I finally put an armed mouse trap in my ping pot. Trap got triggered a couple times before the birds decided to leave it alone.
T

Wow, that is a long dormancy, but I have heard that alpine Pinguicula can be dormant most of the year. A psittacina I got in October didn't start growing again until the end of March. I hope your plants are able to have a long growing season this year. And I agree, the fence looks a little short to be keeping out cats.

Dragon, I have green chicken wire I have to put over the larger pots..I have some photos of it here:

its coated in a green vinyl, doesn't rust..picked it up in a roll at Home Depot..
yeah, I do have bird issues! especially in the spring (nesting season) the mother robins love to pick at the spagnum moss
for nesting material..I also use spinning CD's, which do help, also visible in the link above..

and the fence works fine for the cats!
they wont jump over it, because they would have to land on multiple pots..
they aren't *that* into the water..
they drink it if its available, but the fence is enough to keep them out..and they have a container
of fresh water out on the deck..

We have the same weather. After bringing them home from a hobbyist on the 3rd of the month, I waited a few more days before hauling them up to the porch. When it snowed. last Tuesday and had that crazy overnight low, I brought them inside for a couple days, before putting them out again.

Im not sure exactly what year I started this new method, of simply leaving them dormant until April,
until its warm enough for them to go outside for the season..Its probably been 4 springs in a row now, perhaps 5 years.

5 years is starting to show the results of this extended 5 to 6 month long dormancy..and the results are: not good.
my plants are beginning to weaken, and some are dying. a few Sarrs didnt make it through the winter this year.
(VFT's are still robust and fine however.)

I can only conclude that the extra-long dormancy is too much for the plants..
its a much longer dormancy than they require, and it also results in a shortened growing season.

So im now considering this method a failed experiment, its not good for the plants.
next spring im going to go back to the previous method, which was:

plants go into the stairwell (which is essentially "the fridge method") in early November,
after going dormant naturally outdoors through Aug-Sept-October.
(they spend all of April to early November outdoors)
After 3.5 months dormant, they come out of dormancy in the middle of February.
they then sit in an inside window until April, when they can go back outside for the season.

It seemed like the "extended" dormancy was working well the first few years, but one or two
years isnt enough time to make a call..plants dont work that fast.
but now enough time has passed, 4 or 5 years, to show its not working well afterall..
the plants have spoken, they dont like it, so im going to stop doing it.

thanks,
Scot
You must log in or register to reply here.

A
What are you doing for Earth Day and Arbor Day?