I've never kept a CP as a house plant. I mean, I had a plant rack that was within my living space when I first started 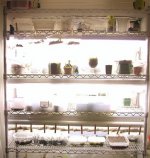 But never had a CP as a house plant. Some may remember this thread where I mentioned my wife brought a Nep home to me. I figured what the heck, may as well have it inside as they're intended and see how it does!
I started off just hanging it on the light fixture over the sink which faces NE. 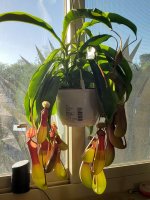 By 4 months later it has put on some pretty good growth. I started using an aquaglobe to keep it watered. Seemed to do well with growth, but not many pitchers. 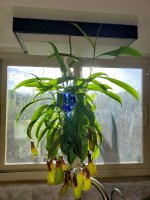 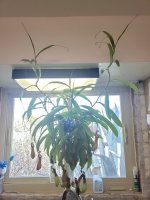 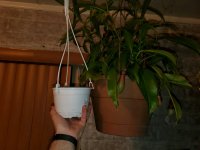 Every night I would open the windows and put it on the kitchen table so it would catch the morning sun, then by lunchtime when the sun was gone I would move the plant to the hanger by the window 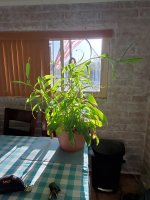 It was not pitchering using this method so I picked up a light and had it set up all silly (stacked dumbells to mount it too hahaha) to see if it worked (no photo for you!) but it did start pitchering... on the side with the light. 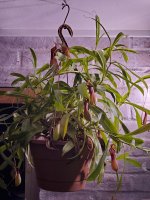 Sooo..... I adapted the light so rather than both lights being on one side, it looks little bit better in the living area and the light now comes onto the plant from two sides and some light from the 3rd and sometimes glare from the tile will reflect some light to the plant in the evening from the 4th side. (Don't mind the green screen, daughter is the S. Arizona president of Skills USA and uses that spot for her official meetings ) 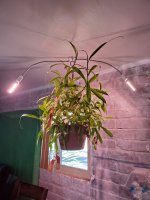 It's still too early to call it since
a) I keep wrapping the vines around the planter to keep them somewhat in the same area so hard to know if pitchers formed there or were wrapped there and
b) it's not been setup like this long enough yet. But looking at new pitchers inflating it sure seems to be working! This pitcher is still on the plant from when both lights were on one side by it sure seems happy to me. Going by the all red pitcher I also think the two lights on one side was over kill so I'm hopeful that the new configuration will work! 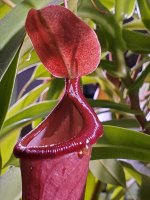 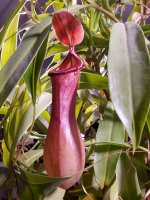 This is the light I'm test driving... https://amzn.to/2OKzRIy
I'd love to see anyone else's "house plant" CP that is at least trying to not be an eye sore.

Well, sure looks like the light is working good!

That's a beauty! I used to grow some Neps indoors. I'm hoping to do so again when I pick some up at the auction!
Congrats with the light! Glad it's working out.

'Looks great, Andrew! It really makes me want to try growing Nepenthes from my ceiling. 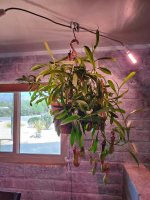 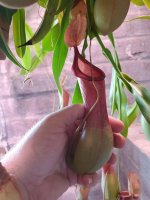 Lovely!
You must log in or register to reply here.