Yesterday I headed out to the Sierras with a list of places to see... One of them I knew had Darlingtonia based on some quick Google research, and a few other places within that same ultramafic rock formation that looked like they might be the correct habitat as well.

I went to the known place first so I could get all excited about the next places I was checking out and get an idea of the correct habitat, and sure enough, they were everywhere! Growing in a variety of conditions as well - from pools of standing water in deep forest, to small creeks running through sparse pines, to damp, full-sun meadows where the plants were struggling to keep their "heads" above the grass!

It was very cool to see mature plants in person and to touch their three-foot, softball-sized leaves - they feel like plastic! One thing I've always read about them is that they produce copious amounts of nectar on their "tongues"... I felt the tongues on a few dozen plants of differing sizes in a variety of places, and they were all completely dry. Does this have to do with the time of year? Is it just that particular population? The tongues on my plant at home (also derived from a Sierra population) don't seem to produce any nectar either, but my plant is still very small.

Some other observations... Most of the plants are plain green with perhaps just a small bit of red on the tongue, even in full sunlight. The plants growing in shade had no red at all. I was quite shocked when I noticed this, since I'm used to seeing captive plants that have large amounts of red on their leaves. I realized this is because when people collect a plant from the population, they most likely choose the prettiest one (i.e., the one with the most red) instead of the greener ones that can be considered "typical" for the population. I did see two clumps of plants (out of thousands) that had as much red as most captive plants, growing in full sunlight next to completely green plants.

Lastly, after visiting these plants in the wild, I now understand the significance of the cold roots issue - wow, the ground was cold there! The water appeared to be fresh out the ground as it made its way down the bog, and even the shallow water in full sunlight could not have been above 42-45 degrees. Even where the ground was just damp rather than under water, I estimate that it could not have been above the low 50s (and very I'm good at estimating temperatures by hand, goes along with finding snakes). Nightly air temperatures drop to about 40 degrees in that location this time of year, though when I was there in the day it was about 70 degrees.

After photographing those plants, I went to the other locations I had marked. No luck at any of them. When I got there I could see why, there was always something "wrong" with those places that wasn't apparent from Google Earth... Incorrect type of rock, water moving too fast, water not moving at all, too dry, etc. I guess it's just a matter at being able to perfect your skills at finding good places using satellite imagery. There will be a next time, and hopefully next time I'll find some more plants!

"Typical" plants, growing in full sun, with little to no red: 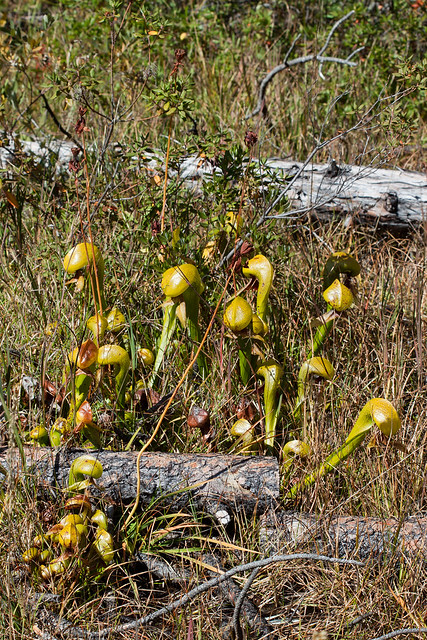 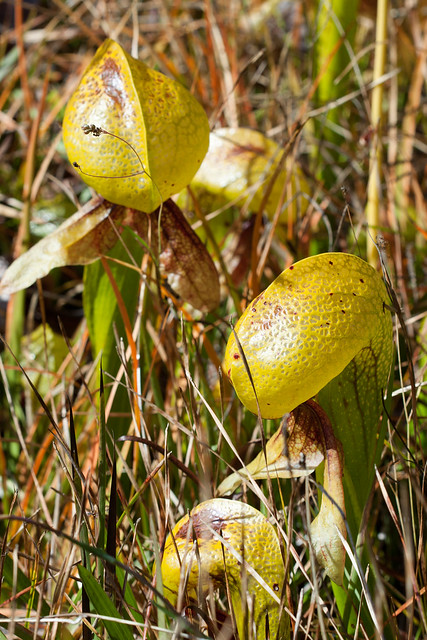 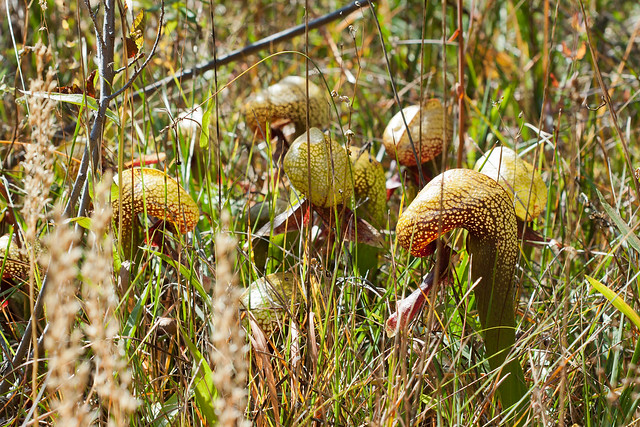 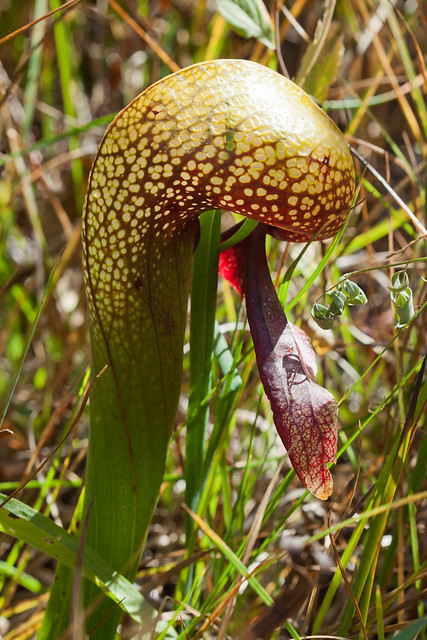 Completely green plants growing in deep forest, which don't receive anything more than dappled sunlight during the day: 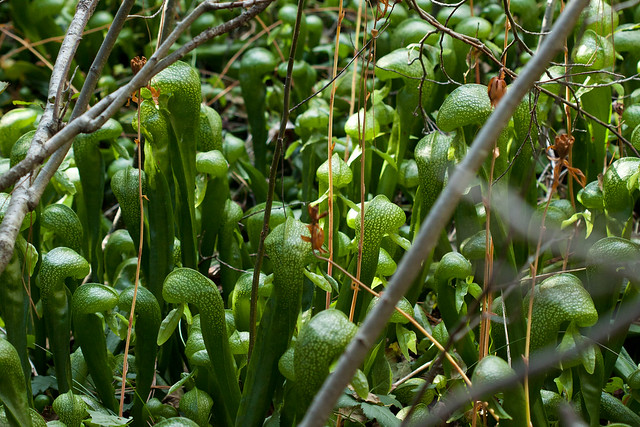 Very cool! I really need to go hunting for darlingtonia...

It's exciting, isn't it? I remember seeing my first wild Sarracenia. It's even more fun when you discover a new population or county record. It's good to see more people getting out in the field.

Great pictures! I love the ones with the red highlights.

Wire Man - Yes, it's very exciting! I hope I can find another population before winter begins, I really want to see how variable the different populations can be.

Love that last pic. May have to use it as my desktop background.

i take it you missed the darlingtonia talk @ BACPS last saturday? from the talk, it seems like there's a lot of variance within this species---there are those that stay green all year, while others turn dark red. there also happens to be a lot in variance in tongue size---some tongues are 2/3s the size of the pitchers. very cool pics! thanks for sharing.

Amphirion - Yeah, I missed the last meeting (and the meeting before that, and the show) because BACPS doesn't seem to send out emails saying when those events are taking place. :\ I only find out about these things after the fact when I hear people talking about them.

In terms of absolute variance in this population, it was quite high - some pitchers were even more red than the ones pictured above, and the shaded plants had no trace of red. Relative variance seemed to be pretty low though, with >90% of the plants looking like the first couple photos (plain yellow-green) even in full sun. I've seen plants derived from this locality for sale, and they all had heavy red coloration, which leads me to believe they're from seed collected from the reddest plants in the bog.

I didn't notice anything about tongue size except that a sizable fraction of pitchers had no tongues at all; I figure this is due to herbivores eating them rather than a natural absence of that part. I'll have to go back there and check that out!

Thanks! Since I didn't have my wide angle lens, here is a cell phone shot of a larger area. Even this is just a small portion of the population: 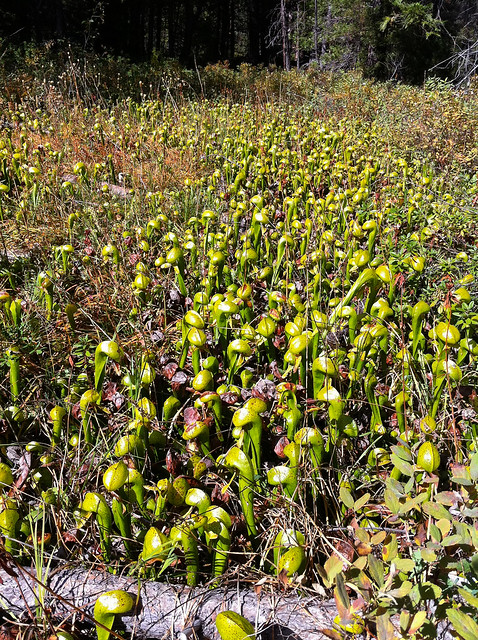 very nice Natalie. if you were wondering, next meeting will be on Jan 21st at the Conservatory of Flowers in SF.

Thanks! I'll put that in my phone and hopefully I'll be able to make that one.

My Darlintonia makes pretty decent amounts of nectar and in the peak of growth can even have a really pleasant sweet smell. I haven't payed particular attention to the timing of nectar production, but perhaps later in the season nectar tends to dry up.

I used to live in CA and also had the chance to see them in the wild (that was my first CP to see in the wild too!). It's definately a cool experience.

Nice pictures Natalie!! I did not know they grew in the Sierras, nice to see the diversity.

I just posted my pictures from the Siskiyou mountains in southern Oregon from this year in May. Quite a difference in color from the Sierras, although my trip was in May and the pitchers were last years growth. Fun to compare the differences in different locations. I will get some pictures of Darlingtonia on the Oregon Coast next year since it is only a few hours drive from me and post those, and hopefully go back to the Siskiyou mountains in southern Oregon in summer to get pics of new pitchers to compare the differences.

richjam1986 - Yeah, I'm thinking it might have been because it was so late in the season. With winter fast approaching, it wouldn't really make sense for the plants to attract and catch insects if there won't be enough time to digest them. I'll have to go back in the spring and see if they have nectar then.

DJ57 - Awesome, I'll go check that out! I wonder if the ones in the Siskiyou Mountains are more like the coastal populations or the Sierra populations in terms of habitat preferences and whatnot...

richjam1986 - Yeah, I'm thinking it might have been because it was so late in the season. With winter fast approaching, it wouldn't really make sense for the plants to attract and catch insects if there won't be enough time to digest them. I'll have to go back in the spring and see if they have nectar then.

DJ57 - Awesome, I'll go check that out! I wonder if the ones in the Siskiyou Mountains are more like the coastal populations or the Sierra populations in terms of habitat preferences and whatnot...
Click to expand...

The ones in the Siskiyous experience hot temperatures (can reach 100 degress) in summer, some growing out in the open with no shade, and snow covered in winter. I am assuming the Sierras get the same? The ones on the coast have much milder winters and daytime temperatures much cooler than what the mountain variety gets.

Interesting... Yes, their habitat does sound very similar to the Sierra populations, the Siskiyou ones might get a little more moisture though (as both rain and snow).
You must log in or register to reply here.