I have a Miltassia Shelob 'The Weed'. It's the first orchid I ever bought and I've had it for several years. I've previously had it in straight orchid bark and watered it about once a weak. It would put out one or two new bulbs a year and spike once from each bulb.

Of course, being my first orchid, I damaged it multiple times. I tried to put it out in the summer on a shaded porch, but I guess I didn't acclimate it well enough or maybe it just can't handle that, but I burnt the tips. For whatever reason, I've never had to divide it. I've repotted it 2-3 times since I've had it. I wait till it's growing out of the pot. I usually take some damaged bulbs off the end before repotting, but no the actively growing end. I might trim the roots a little if they're super long, to help it fit in the pot, but I try to leave them alone for the most part.

On 4/11/2016, it was time for another repot. Some of the old bulbs were shriveling, but it had a nice new one that was just a little wrinkly. I felt like my watering schedule was too infrequent for it. It sits in a bathroom, beside a south facing window. It gets some bright morning light, and moderate light throughout the day, along with heavy humidity a couple of times a day as people shower.

Because I felt that once a week wasn't enough and I didn't want to water more frequently, I decided to add a little LFS to the mix. Again, I used straight orchid bark, but I also added in some LFS. I tried to mix it together, well, but I ended up having to put a little of one and a little of the other at the end.

I have the back end that had ~4 bulbs, in one pot in my room, it's drying out fairly quickly. I left the front half with ~5 bulbs where it had been in the bathroom. It takes it a little over a week to completely dry out. The front half also had a spike forming when I repotted. I didn't want to do it then, but it was small and it really needed that repot. Now the spike is a foot tall and the side shoots for the buds are forming. At first, the new media seemed to be doing great. The old bulbs didn't unshrivel, but they got plumper. Also, the new bulb, with the spike, got completely plump. That was exactly what I was looking for.

However, over the last week or so, I've noticed the new bulb is loosing it's plumpness. It's now 5/6/2016. I'm letting it dry to where the sphagnum on top is dry and it's just a little damp to dry when I stick a finger down in the media. At that point, I put it in the shower and flood the media. One side of the new bulb isn't really showing wrinkles, but the other side, near the top is starting to shrivel.

I really don't know what's going on here. Is it stress, overwatering, or something else? Should I repot it and take the sphagnum back out or drastically reduce it. I was shooting for the sphag to end up being .25-.33 of the mix.

If anyone has run into this issue and can help me, I'd really appreciate it. I'd had to kill this orchid, that's been with me so long. Thanks.

Here is a picture of the roots when I repotted it. I had to trim the longest ones to fit in the pot: 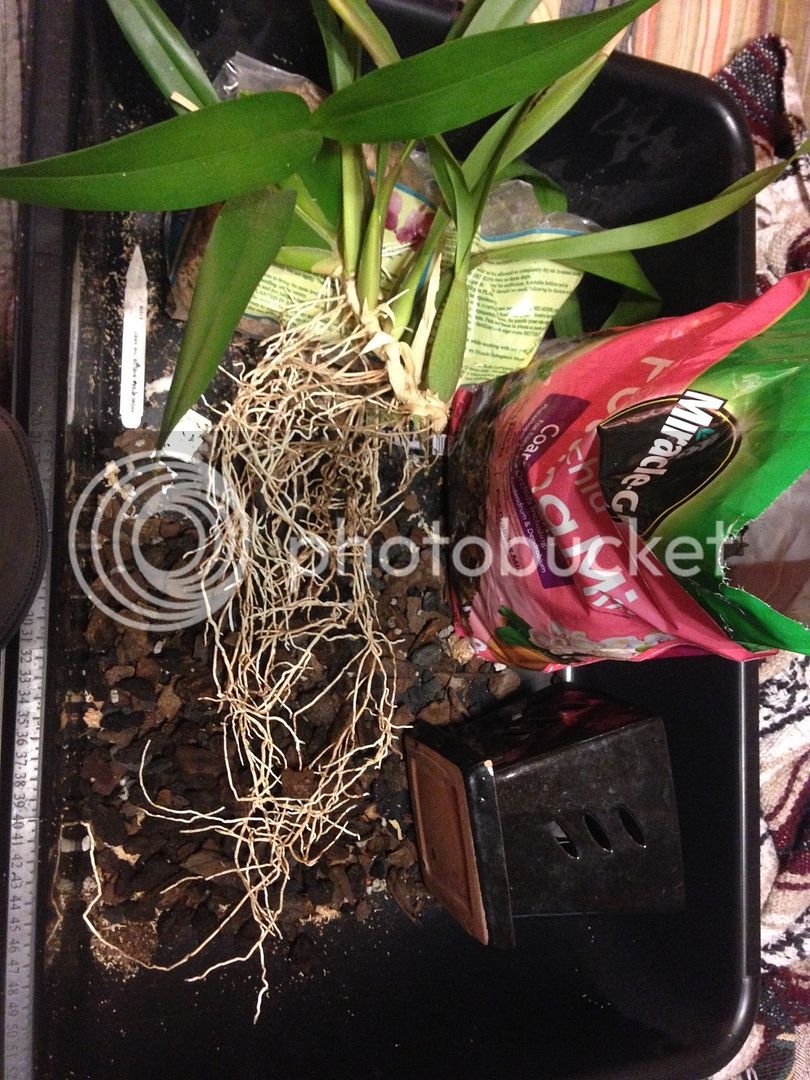 Here are the front and backside of the bulb as they're starting to shrivel: 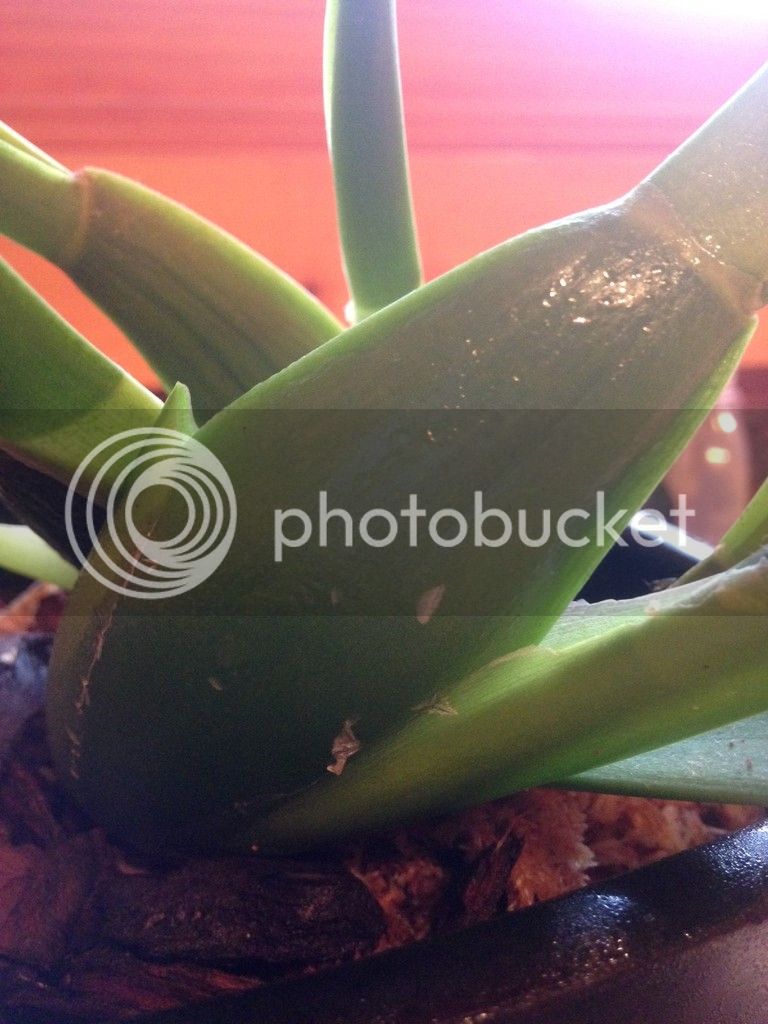 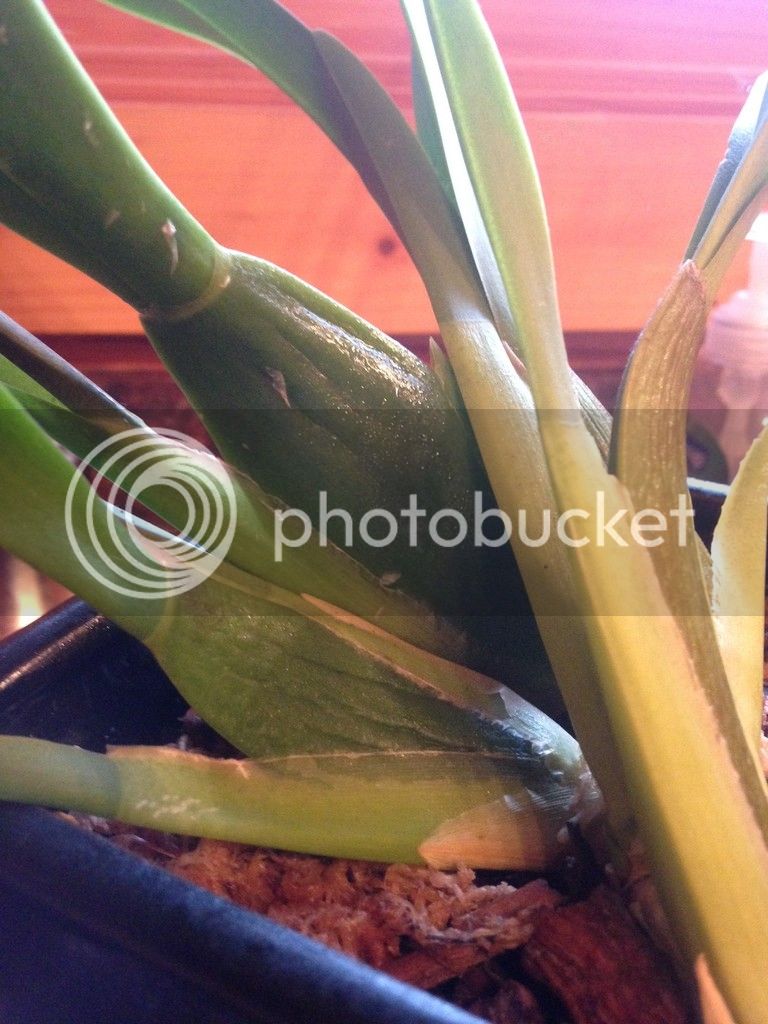