Is this Scrophulariaceae species practicing carnivory?

Is this Scrophulariaceae species practicing carnivory?

Allen Lowrie and I have been working on breeding a large selection plant species, many of which do not always relate directly to this CP forum but if you grow carnivorous plants the majority of these plants do make fantastic companion plants.


This particular Scrophulariaceae species shows signs it maybe be practicing carnivory which will be of interest to Pinguicula and Drosera enthusiasts.
This Scrophulariaceae species is a leafy, very floriferous, compact, branching, Mexican Pinguicula-like plant with its leaves densely covered with glassy Drosera-like glands that are capable of capturing small flying insects. Its solitary flowers are numerous and positioned just above the leaves. Its flower shape is Pinguicula macroceras-like but without the spur and upper petals of that species. 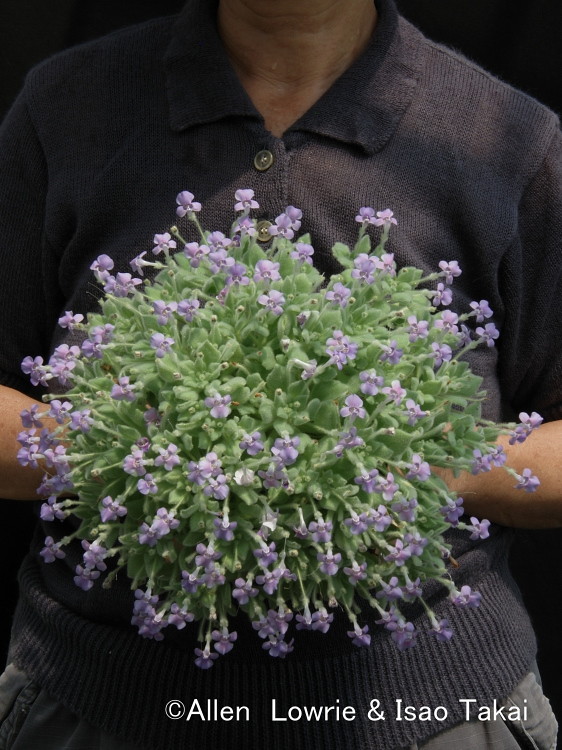 Photo 01: A top class clone that Allen-san and I have bred. 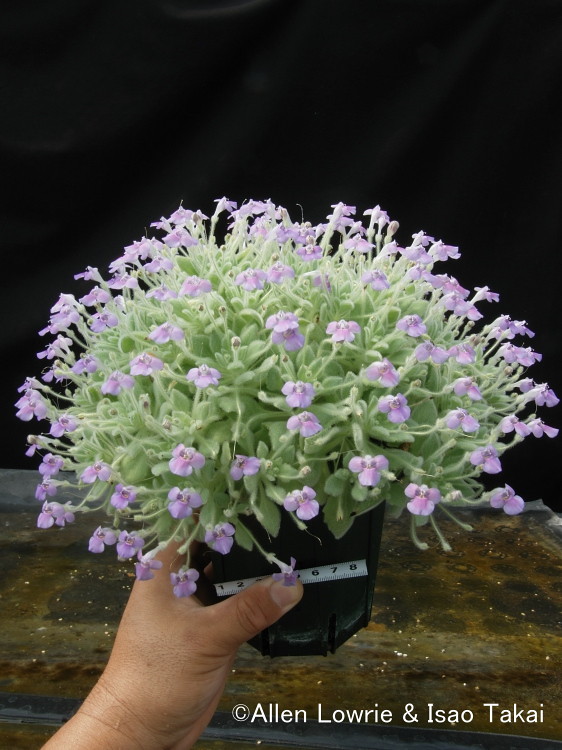 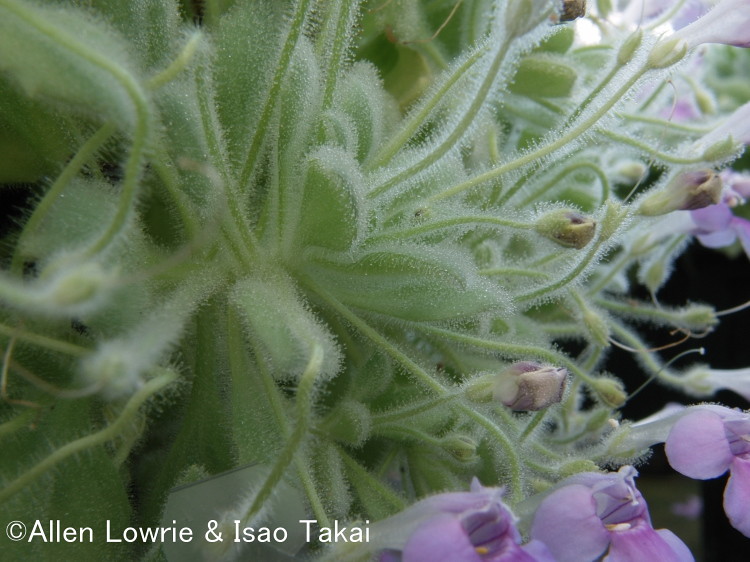 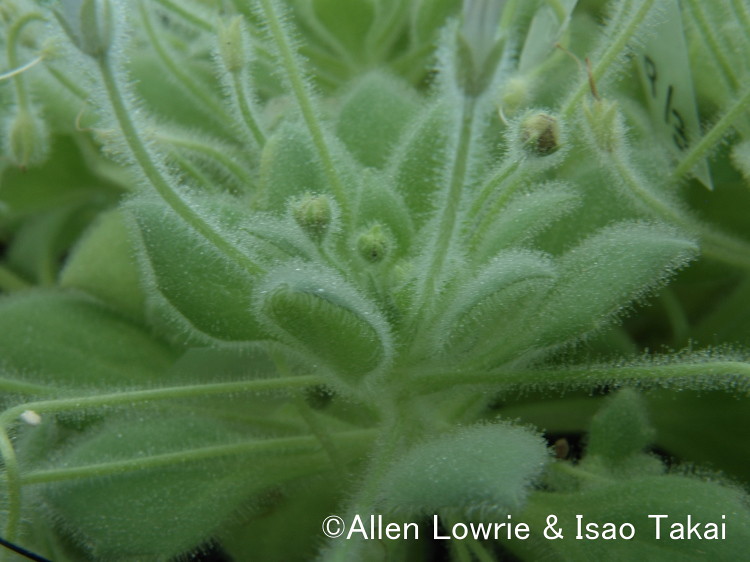 Photo 04
Photo 03 & photo 04: All parts of the plant foliage as well as the abaxial surface of the petals are covered with mucus tipped glands. 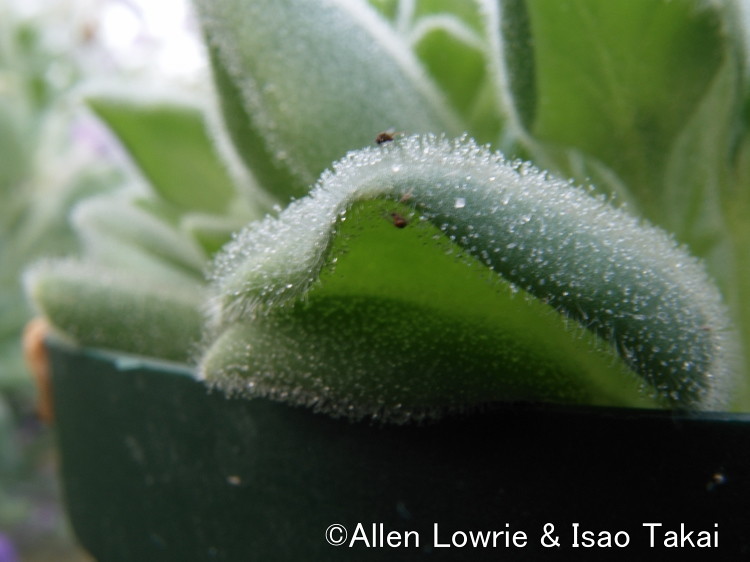 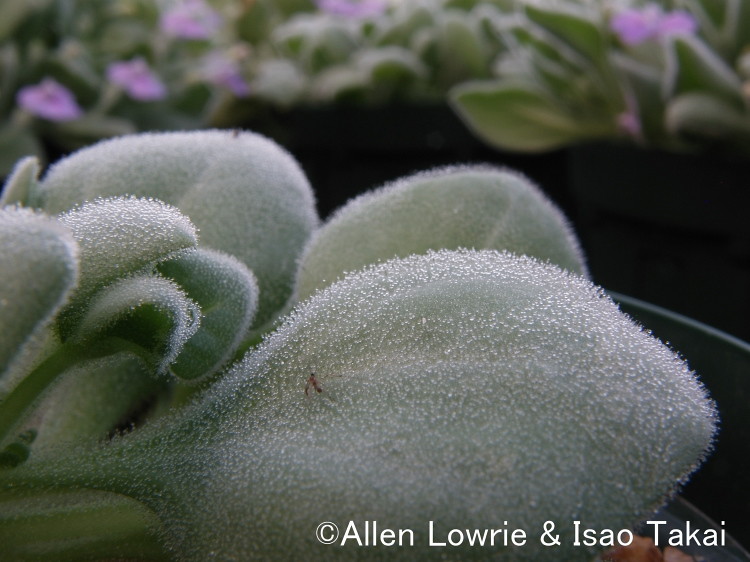 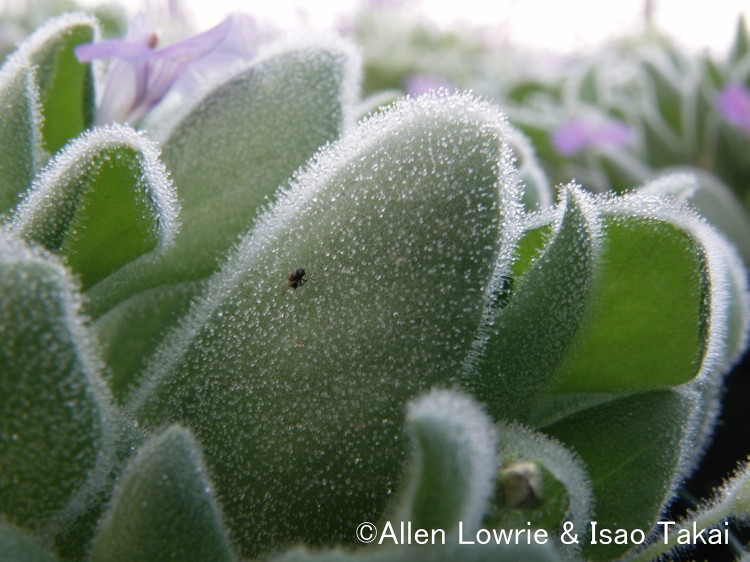 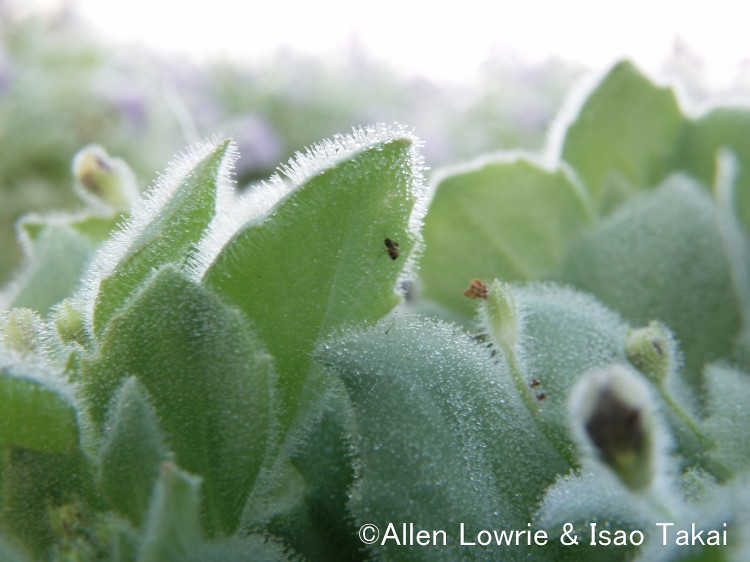 Photo 08
Photo 05, photo 06, photo 07 & photo 08: This species can catch small insects on any glandular part of the plant. Principally the adaxial and abaxial surface of leaves, flower stalks and the abaxial surface of petals and tube.
The viscosity of mucus is not as strong as that found in Drosera species or even that of Byblis guehoi to which it has been compared. The size of the prey this species captures is therefore rather small.

We are not exactly sure just what purpose the glandular covering on this species is used for.
Could its purpose be a means of gathering nutrients from captured prey; to defend against insect attack; or is it a self-watering adaptation used during the dry season, to collect water droplets from the moisture laden air during the early morning humid periods? Or is it a combination of any or all of these three adaptations?

Note how the motion of the flower stalks continually search for a place to position their seed capsules. The DNA code of this species seems to be designed to search for suitable locations where it can lodge its seeds into nearby cracks, ledges and fissures of a cliff face thus colonizing its vertical habitat.
We have proved that selected clones of this species from our breeding trials are very suitable for pot cultivation. They make an ideal potted colour species for sales in the florist and nursery trades.
The species may also be suitable for landscaping projects as well. Especially in regard to the decoration of large areas of brick, rock and block retaining walls. Landscape architects of the world may find this species the solution to adding living colour to the bare walls of their garden designs. This species preference for cliff face habitats make it a suitable candidate to be incorporated in their landscaping designs as spectacular vertical wall gardens. We can see a big future for this species in the hands of the world’s leading landscaping architects and designers.

In the younger flowers it appears only the pistil with its bilobed stigmatic tip is mature and active. The anthers at this time are not active and are hidden within a two lobed protective housing.
When the pollinator enters the flower: it triggers the pistil to rapidly swing upwards; gathering pollen grains on its stigmatic tips from the pollinator in the same motion; and finally positioning itself horizontally and well away from the pollinator. If the pistil fails to scoop-up pollen from the pollinator's body, the pistil will within 24 hours, reset itself and hang as before at the flower entrance ready for the next pollinator visit.
Later as the flower matures, the anthers push their two lobed protective housing apart, pollen grains are release and gathered together in a clump. The pollen package is now visible and hangs between and just below the two door lobes. The pollen is now readily available for pollinator deposits and transportation.
It appears a fully mature flower will not only accept pollen from a pollinator, but will also deposit its pollen on to the same pollinator as it exists the flower.
Note the 2nd well matured flower in the video: This pistil action suggests that if a pollinator touches the pistil strongly, the stigmas may come into contact with its own pollen. It appears this species could self-pollinate, but its design has a preference for out-crossing.
For a Japanese translation please go to:http://princeofwalesfeathers.blogzine.jp/blog/Scophulariaceaespecies.html

Ohhhh it's cool, and really pretty! Even if not being a carnivorous, I like it!

A leuco by any other name would still be as glutto

How available is this plant to the public? What is its cold hardiness and sun tolerance?

Cool plant, either way Run some tests to see if it could be carnivorous!

This plant might not be carnivorous, but it still could be quasi-carnivorous like Passiflora foetida or the genus Stylidium. Either way, it looks great and is perfect evidence of how organisms shape themselves around their different environments.

What I find especially interesting is that the family Scrophulariaceae and the genus Pinguicula belong to the same order of plants: Lamiales. So, in a way, they really are very distant cousins!

Does it produce any digestive enzymes? Does it absorb nutrients from trapped insects?
If so, we have a carnivore on our hands!

EntHerptology said:
Does it produce any digestive enzymes? Does it absorb nutrients from trapped insects?
If so, we have a carnivore on our hands!
Click to expand...

Don't worry, we all make mistakes! (Especially me. )

A leuco by any other name would still be as glutto

Don't worry, we all make mistakes! (Especially me. )
Click to expand...

what plant(s) traps insects, absorbs nutrients from it and doesnt benefit?

Fascinating! These videos certainly seem to show dissolution of solids in the dried insect larvae and a possible method for absorption at the roots perhaps?
K

Sent from my SCH-I435 using Tapatalk
You must log in or register to reply here.

Z
My drosera capensis is growing a new...root? Should I do something with it?