I have read and heard many things about HL lighting. Some source says that they prefer better lighting than humidity, other says that they need hight humidity and high lighting. My terrarium is 53L and the size is 59cm(lenght) X 35cm(height) X 30cm(width). (I probably have to change it to bigger if I success well )

I have a spare aquarium lamp with one 15W fluorescent lamp, but I think it's too weak. Another thing is that the lamp should heat the terrarium at day, and at night temps should cool down. Our cellar is always +12C warm, except in hot or very cold days the temperature can reach 9C to 14C. In my opinion one 15W lamp can't be able to heat the terrarium to about 20C or higher. How important the day temperatures are? What if I reach only to 20C at day, is it bad? Thought the night temps are more important with HL than LL.

So should the light be 2X18W or more? I've read that T8's produce more heat than T5s so I probably have to use T8s. Since the terrarium is about 60cm long it cant have 100cm lamp with higher watt amount.

I haven't been able to test the lighting, because the cellar don't have a contact box, yet.

I have raised a number of highland Nepenthes from seed over the years and prefer 40 watt bulbs at a very minimum -- and within a few inches of the plants or seed trays. Conventional "shop fluorescent" tubes work just as well as the CFLs and "grow-lights" at a fraction of the cost.

Unless you're prepared to have fans on hand, I would avoid the T5s or T8s with highlanders.

I don't worry at all about humidity for my highlanders. They grow as houseplants under T5s just fine. I'm a firm believer that - at least for Neps with thick, hardly leaves - light is far more important than humidity.
Lowlanders tend to have thinner leaves and are thusly more prone to drying out, so the few that I grow are in a terrarium and I'm careful to keep them above 50% RH. I use T12s for those, because I think the heat of T5s boxed into a terrarium would be difficult to manage.
~Joe

Ok, thank you very much!

Bella - Do you mean that T5s and T8s would produce too much heat, therefore I should purchase couple of CFLs? On the other hand, the cellar is 12C/53.6F warm, so would it cool down the excess heat? Well, I'm thinking about buying a lamp that has 3 x 26W CFL places.

Okay, so the humidity won't be my problem!

In my growing experience I have found that better light producers healthier plants, rather than better humidity. Also, light is relative to the size and species. I'm no subject matter expert here, both Bella and Seed have much more experience with neps than I, but to make a point, here is how I grow my small N. Spec x Aristo.

...and they drool in these conditions My only point is that in my experience better lighting produces better results. This little species is grown under a desk where it receives absolutely no natural light. The bulb is your standard 60W CFL 6400K.

I hope this helps a little!

Does humidity relate to how compact the plant stays? I only think this because I have a N. Spec x Aristo as well, but in a terrarium which I'm guessing hold more humidity than open topped jar above. My plant has a lot less stem on it. It is pretty much leaf, leaf, leaf as opposed to leaf, stem, leaf, stem, etc.
Any thoughts?
If you can kind of see how the leaves are laying on top of each other. 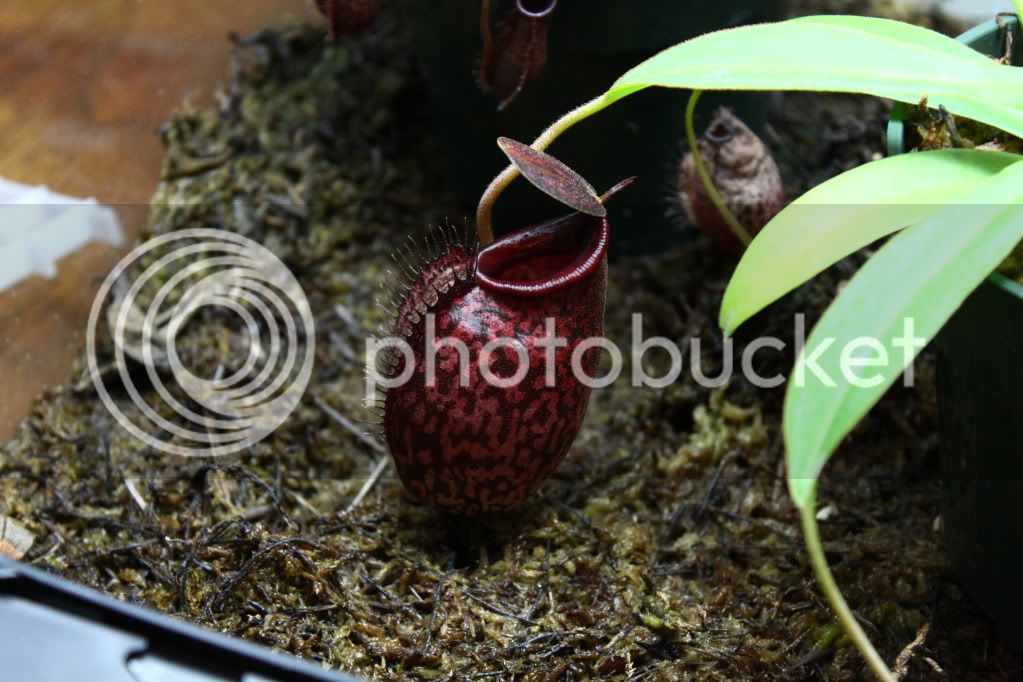 I tried today my other T8 lamp which is 2 x 18W.
The cellars temperature was at first 13C/55F and one hour later 17C/62F) with lights on. Thats probably too low for a day temp

Maybe I should think about lamps that produce more heat (up to 20C/68F).

You definitely need to up your wattage. I get the best results in my highlanders (and low-landers!) from mixing 36 watt T12 cool white fluorescent tubes with 56 watt 6500k T5s or with several "100 watt equivalent" 6500k CFLs, which are much less expensive and provide the same quality of light IMO. I have some of those burning in multi-socket bathroom fixtures over some of the plants. The fixtures were cheap, but it looks a lot nicer than using utilitarian clip-on fixtures. The plants I have under those particular lights don't have any augmentation from warm white T12s, and they seem to grow just fine without it. The combined wattage there is 208, and that supports a multitude of plants, including some rather large low-landers growing out in the open.

The wattage over my highland tanks is 224 for the T5s, with another 72 for the cool white T12s running along the back side of the tanks, which are about 5 inches from the glass. Any daytime heating of the tanks comes from that unit in the back. If you have enough light going it all adds up, and you don't have to put the fixtures so close that they will heat up an enclosure unless you want that. My T5 lights are 2 feet away from the plants, and the pitchers color up just fine, even on plants I have growing out in the open in front of the tanks, which are further away from the fixture.

You won't need as much wattage as I'm using if you have just a few plants, in which case you would just put the lights closer, but I would shoot for at least 150w, in any case. Any heating from lamps can be controlled by the use of a small fan to carry it away, and that can be adjusted through distance to provide just the right amount of daytime heating you might be looking for.

As for humidity, my plants are sitting atop multi-celled seed trays over water in the bottom of the enclosures. I used to employ small personal-sized humidifiers timed to come on a few times at night, and that worked well, but the units never lasted very long, and I got tired of replacing them. I found that this was unnecessary. Now I just mist all my plants thoroughly once at night to get the humidity up, and it seems to work just as well. They grow just the same and haven't missed a beat, which leads me to believe that extraordinary measures aren't really necessary for most plants to keep them healthy, although they will always do better if you can give them optimum conditions.

I hope that helps.

P.S. Sorry about using fahrenheit to discuss temperatures, but the conversion to celsius should be easy to find.
Last edited: Jun 5, 2011
You must log in or register to reply here.

V
How to keep humidity in terrarium high, without constant misting?