I have a Sarracenia and two flytraps in a round plastic bog. See picture. The water temp today at 4 pm is 102 degrees F. The air temp now is 96 F. Tomorrow is projected at 100 F and next week is projected at 104 F. I’m concerned that this will harm the plants. Does anyone have info about temperature limits? I’m new to these type of plants and don’t want to cook them. 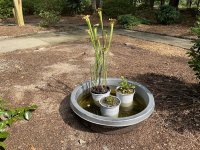 I was hoping someone with more meaningful experience would chime in by now but let me take a stab at it. First of all, I grow my Sarrs in the NE US, not the SE, so have more insight regarding winter, not summer extremes. But I lived in Mississippi for several years growing up and also in college so am familiar with the climate/habitat.

I don't think those temperatures are good for the plants but hopefully they weren't immediately fatal. What I think you should try, if you can, is to dig a hole the shape of that bog so the lowest several inches of the bog are in contact with soil. Ideally, the soil would be at least as high on the outside as the water is on the inside. Higher is better, but not too high. You don't want surface water and debris flowing in and you'll want to be able to dump the water out and replace it occasionally - I like to do it at least once or twice a week because of mosquitos. If the soil or property owner or the parents make that too difficult, try mounding mulch around the outside of the bog, but not so high it can wash in.

By the way, these steps are similar to how I get Sarrs through the winter. The only differences are that I take the pots out of water and put them in the ground to within ~1" of the top of the pot and then cover the pots with 6"+ of dried leaves and long grasses. They survive temperature of -10F that way. You don't want mulch on top of the plants during the growing season, of course, but good ground contact and judicious use of mulch is a great way to moderate temperature swings.

Thank u for the info. The plants are still ok. They must be really tough. This last week we have been having hi 90’s and low 100’s. SC has been pretty hot so far this year. The ground they are on is bare and gets pretty warm too. I did dig down. About 3 “ down it is cooler. I think I’ll try setting it in the ground like you mentioned. I was also thinking of putting a white cover around the top. I haven’t come up with a simple way to do that. Maybe chicken wire frame and a white cloth or plastic. I don’t have any restrictions other that a Home Owner Association.
You must log in or register to reply here.

My UHL Setup (In Progress)
2

How to Safely Seal a Bog Garden Crack