When I decided to restart my CP collection I had some seeds stored in my refrigerator for up to 17 years. Some were from the ICPS seedbank and some were from my old collection in the mid to late 1990s. I had over two dozen species and varieties. I had little or no hope that any of those seeds were still viable and I didn't want to waste growing space and resources on a futile effort. So I decided to try an experiment. Put the seeds in test tubes half filled with distilled water and see what happens. In addition to the ancient seeds, I also purchased some new seed and tried to germinate them the same way. Here are the results so far.

Notes
Note 00: I learned from past mistakes and put each seed in an individual test tube. I used the eye-dropper transfer technique first on this batch. Each seedling went into an individual pot. 16 seeds yielded 16 seedlings. So far, 100% survival rate.

Note 1: 21 seeds yielded 21 seedlings. All seeds were in the same test tube (mistake #1). I waited until all had germinated to try planting them (mistake #2). Their roots were stuck to each other and I tried to pry them apart separating them (mistake #3). I tried using toothpicks, needles, forceps and various instruments to handle and move them (mistake #4). Out of 21 seeds, I had 6 survivors. After kicking myself for several days, I ordered more seeds and decided to try again. So far the survivors have been given a light foliar spritz of MaxSea (¼ tsp per gallon of distilled water) and some rehydrated dried bloodworm soup. Four are looking well but two died.

Note 2: This was very old seed and from 5 seeds, 1 germinated. I poured the test tube onto a paper towel. I tried to pick up the seed but had difficulty grabbing it. When I put it in the pot it landed in a bad location. I must have damaged the root by relocating it because it died a few days later.

Note 3: This germinated OK but the pot got knocked over, the soil spilled everywhere, and all the seedlings vanished in the mess. I replaced the soil but over a month later not one seedling has reappeared.

Note 4: This species appears to be Drosera burmannii. I grew this one from ICPS seeds over 15 years ago. Those plants produced seed. I saved it but never labeled it

Note 5: This was old seed that had not been cleaned well. Filamentous algae started to grow. I dumped out the water filtering the seeds out through a coffee filter. I added fresh water and a few days later the seeds germinated.

Note 6: I failed to do my homework on this species. It's a cold temperate growing Sundew. I should have given it 8 weeks of cold stratification with my temperate species.

Wash your test tubes and pour in your seeds. Don't forget to label your tubes with species and date.
Add 10 ml distilled water to each tube and put in the stopper.
Put tubes in a well lit area but avoid direct sunlight due to chance of algae growth.
Room temperature is fine. I did not use any bottom heat.
Agitate daily by shaking each several times.
Check test tubes every day with a magnifying glass of 10x or so.
When you see germination, mix up your growing media, and pot them up.
From here on, grow them as you normally do.

“Days to germination” is how many days until the radicle (first root)visibly breaks out of the seed. In some cases, the time may be a day longer than actual germination period because I waited an extra day until I was sure I saw that root emerging from that first seed.

I didn't count the seeds except Drosera regia so I can't give a germination percentage. The old Drosera regia was 5 seeds with one sprout so 20% there, not bad for 17 year old seed. The fresh D. regia germinated at 100%. With most species, there is a plethora of plants. When they mature I will need a large number of CP growing friends to take the extras off my hands.

Many of these seeds are very tiny. I use a 10x magnifier routinely to check for germination and for feeding some of the hungry annuals and Drosera regia.

After they germinate, the seeds are moved to a pot. You can just pour out your test tube where you wants your plants to end up. If you want a little more control, use a pipette or eye-dropper to suck up some of the seeds and place them precisely where you want them. Even Drosera regia seeds can be slurped up and moved without harming the delicate sprouting root.

Standard 2.5” seedling pots are filled with a layered mix.
The bottom half inch is long fiber sphagnum to prevent soil leakage.
The middle is a standard CP mix, 1 part silica sand to 1 part peat moss.
The top quarter inch is finely ground milled sphagnum moss. (Mosser Lee “No Damp Off”)
Don't mix it up until you need to.

I found only a few downsides. Most are avoidable with small changes.
Filamentous algae can grow in the test tube. But if it appears, just replace the water.
150mm deep test tubes make it difficult to reach the seeds with an eye dropper. Next time use a covered Petri dish or smaller stoppered glass vial
Seeds try to stick to the side of the test tube once germinated, especially D. regia and D. burmannii. Give the tube a good shake to dislodge them.

One failure so far. Byblis liniflora seed from my plant, harvested 11/2015 didn't germinate after a month. Thinking, maybe it's too fresh, it might need a season before it germinates, I dumped the test tube into my regular Byblis pot. We'll see if anything comes up in that spot this summer.

You can germinate CP seeds in vessels of distilled water. The seed is easily visible in the test tube and you can see exactly when it starts to germinate. You don't have to worry about molds or fungus. The growing mix isn't mixed up until the seed germinates so slime mold doesn't have a chance to appear and smother your seed. Sprouting this way takes less room and resources than conventional seed starting methods. From now on, I plan to try germinating almost all of my CP seeds this way.

Phase two of this experiment is an attempt to germinate temperate species of Drosera, Sarracenia, Cephalotus, Darlingtonia, and Pinguicula. in test tubes of distilled water. The seeds, already in water filled test tubes, are currently being stratified for 8 weeks in a refrigerator. I will remove them on May 1st and start my next countdown to germination. I should post a follow up to this forum a month or two after that.

It should be obvious to everyone that I'm not a horticulturalist. I've made every mistake in the book. I apologize to all the plants I killed. All you real CP growers should laugh at this article but possibly it may spark some idea or derivative technique that may further the hobby. Thank you for taking the time to read this. Now if only I had some Drosera hartmeyerorum seeds to experiment upon! (Cue evil maniacal laughter and fade to black)

I'm glad someone took the time to try this and post the results, thank you. I hadn't considered the possibility until I had to scarify and soak some annual flower seeds a month or two ago, and witnessed them swelling noticeably in only 24 hours. Certainly this could be ideal for those with space constraints, to avoid using a large pot for a batch of seed with a low germination rate.

Looking forward to seeing how it works with Sarracenia.

Oooh, there's an idea. I too vote that this be tried on sarracenia

This is a great experiment. I'm very curious to see your results for the other genera.
A

That was a fascinating write up! Thank you Shadowtski!

I tried this using D. capensis typical in little clear latching plastic organisers. They're 1.75 x 1.5 x 1 in, or if you prefer metric approximately 4.5 X 4 X 2.5 cm. I believe I have achieved germination in ~9 days using this method for D capensis Typical, as I started them on august 20th and noticed this just today. I did not collect the seeds myself, so I do not know how fresh they are. They might have received some indirect heating, but they certainly had a lot of direct light. 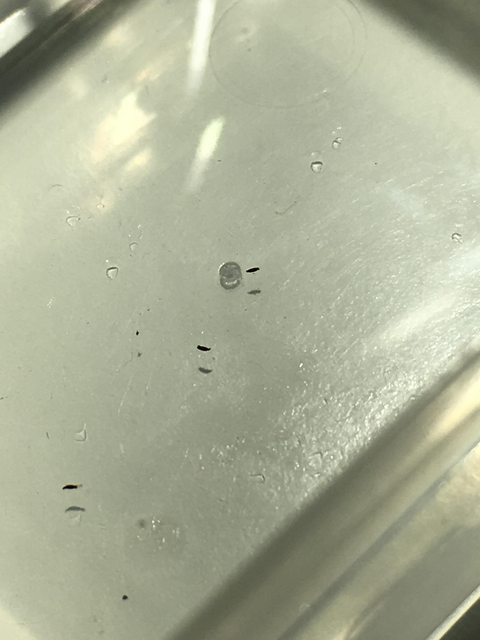 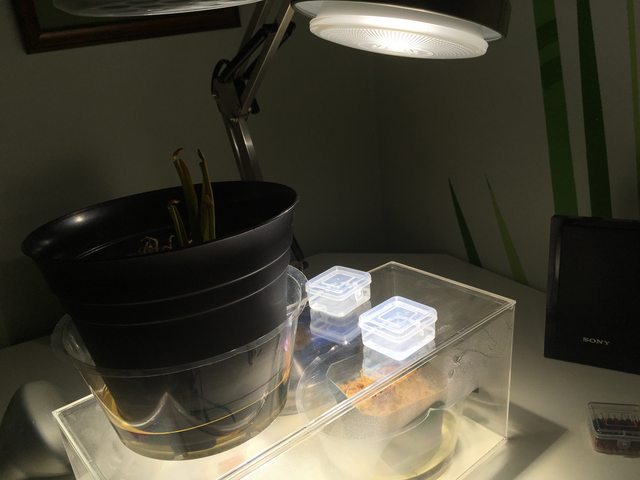 Mike! How are the seedlings doing this far along?? Any updates on the second phase of the experiment?? Did you ever get a hold of D. hartmeyerorum seed to experiment on?

I really appreciate this thread. I have a bunch of Drosera seed to germinate. Glad to see they do pretty well even stored for 15+ years. I like this method, much easier to control. Might try a few the traditional way still, for the name of science.

Now to get a hold of some type of light setup and water germination equipment! This is where being in college still would have helped a lot; close enough to my professors to ask for supplies (petri dishes and tubes). Ha!

Mawy_Plants said:
Mike! How are the seedlings doing this far along?? Any updates on the second phase of the experiment?? Did you ever get a hold of D. hartmeyerorum seed to experiment on?

I really appreciate this thread. I have a bunch of Drosera seed to germinate. Glad to see they do pretty well even stored for 15+ years. I like this method, much easier to control. Might try a few the traditional way still, for the name of science.

Now to get a hold of some type of light setup and water germination equipment! This is where being in college still would have helped a lot; close enough to my professors to ask for supplies (petri dishes and tubes). Ha!
Click to expand...

That was a year and a half ago.
Most of the the plants grew to maturity and flowered.
Some, like the D. regia, succumbed to my mistakes. My second attempt at regia resulted in plants that are now 2 to 3 inches tall.
Drosera hartmeyerorum germinated and grew to maturity for me last year. It produced a fair amount of seed. This species is kind of a Prima Donna for me. It prefers warmer temperatures than I have ready access to.

Looks very Good.
You must log in or register to reply here.